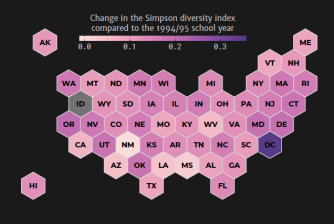 This hex map (3) shows the degree of change in diversity in America’s schools from 1994/95 to 2016/17. A higher value (and darker color) means more change, and vice versa. The biggest change in diversity by far was noted in DC, the least in New Mexico, Louisiana and Mississippi.

The U.S. is undergoing profound demographic change: by the early 2040s, it will be a ‘majority minority’ country – whites will make up less than half of the total population.

That change won’t just suddenly arrive two decades from now. In the younger demographic cohorts, it’s already here. In 2020, there will be more children of color than white children, the U.S. Census Bureau projects. 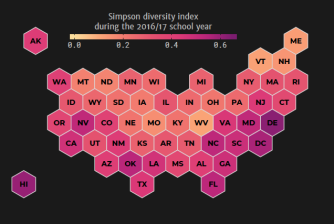 The second hex map shows the degree of diversity itself, in 2016/17. The index tends to be higher in coastal and southern states, lower in central and northern ones. Delaware appears to have the most diverse schools, West Virginia the least.

Comparing nationwide data 22 years apart (1994/95 and 2016/17), the Washington Post recently examined whether the racial diversity of America’s young was matched by racial integration in its public schools. And indeed: more school districts are diverse than ever before, and more students now attend schools with children of different races than ever before. 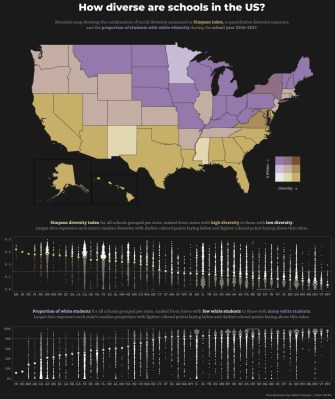 This bivariate (4) map shows both where the ‘whiter’ school districts are: in the purple states; and where the more diverse states are: in the yellow states. “Obviously, the data is partly correlated: a high proportion of whites always leads to low diversity; but still I found the pattern quite interesting,” says Mr Scherer. Low diversity also occurs in places with few white students, e.g. New Mexico and Mississippi; and New York manages to be both quite white and fairly diverse.

White or diverse? Both or neither?

These maps are based on the same data (2) used by the Washington Post, but take a slightly different tack. “I calculated the Simpsons diversity index, a quantitative measure used in ecology to estimate the species diversity in a community. High values (max 1) indicate high diversity and low values (min 1) low diversity,” says Cédric Scherer, a Berlin-based computational ecologist and data visualization designer.

Maps reproduced with kind permission from Cédric Scherer. For more work by him, check out his web and Twitter pages.

(2) The Common Core of Data from the National Center for Education Statistics (NCES). Public school data only; no private, charter or virtual schools.

(4) Bivariate data shows the relation between two variables, in this case ‘whiteness’ and ‘diversity’.

Technology designed to listen for atomic bombs can also hear tornadoes.
Up Next
Life

Robots to the rescue?

First of a 3-part series about future technologies and their role in human flourishing.