Fake news is so yesterday. The future belongs to entirely fake nations. Like San Escobar, created in January this year by a slip of the tongue of the Polish foreign minister. Despite being wholly fictional, the tiny Caribbean country soon boasted many of the trappings of actual statehood: a flag, an anthem, a map, a Wikipedia entry, a Facebook page and of course a Twitter account.

Rewind to Tuesday, January 10. Poland’s foreign minister is in New York to drum up support for his country’s bid for a non-permanent seat on the Security Council in 2018-’19. And it’s going well, Witold Waszczykowski tells the assembled Polish press corps: “I have had meetings with officials from more than 20 countries, including some Caribbean nations with which we have never had bilateral diplomatic contact before. Countries like Belize, and San Escobar”.

The Belizeans must have been delighted that their diminutive, obscure nation was name-checked by the minister. But the San Escobarians can’t have been: that country simply does not exist. Poland’s internet community picked up quickly on the gaffe, and directed howls of derision at Waszczykowski. A foreign ministry spokesperson tried to limit the damage by hastily explaining that the minister, tired after a 22-hour flight, had simply misspoken: he was actually referring to St Kitts and Nevis, a two-island Caribbean state known in Spanish as San Cristóbal y Nieves.

To no avail: it was too late. By the end of the week, San Escobar was a many-splendoured reality, albeit an entirely virtual one, and one whose main raison d’être seemed to be to mock the minister and his right-wing government. Witold Waszczykowski had inadvertently created one of the new year’s first major internet memes.

Almost immediately, a Twitter account popped up for the República Popular Democrática de San Escobar (handle: @rpdsanescobar; hashtag: #SanEscobar). In a weird twist on the trope of the self-fulfilling prophecy, one of the account’s first tweets was to offer San Escobar’s full support for Poland’s Security Council ambitions. Fleshing out fledgling country’s bilateral relations with Poland (to say nothing of reality in general), the non-existent republic’s official Twitter account further informed the world that:

Within a day, #SanEscobar was tracked by over 2 million Twitter users. The account itself soon had thousands of followers.

San Escobar also boasted a Wikipedia entry, showing the coat of arms and flag for the Caribbean nation. According to the article, San Escobar has an area of 459 km2 and a population of about 360,000 San Escobarians. Its president is Nemo Incognito, and the capital is Vinatusca, also known as Santo Subito (a play on words, as it refers to the cries from the Italian faithful after the death of the Polish pope John Paul II – santo subito: ‘(make him a) saint now’). 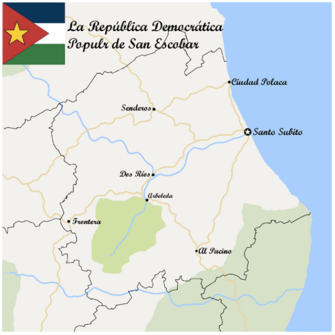 A map of San Escobar, previously shown on the Wikipedia page, seems to have disappeared (but retrieved from this PRI article). As it shows, San Escobar is bounded to the east by the ocean, and has land borders with five non-specified neighbours. On the coast north from the capital is Ciudad Polaca, literally ‘Polish city’. Few cities dot the interior: Senderos, Dos Rios, Asboleda, Frontera and Al Pacino.

The San Escobar Facebook page features a load of touristy pictures and information on the country – much of which is a more or less indirect dig at the Polish government, such as the news that the citizens of San Escobar had erected a giants statue of Waszczykowski for his efforts to place their country on the map. 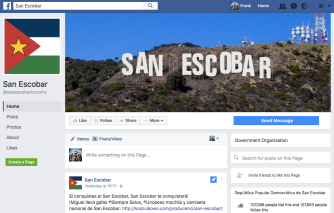 The Facebook page has over 100,000 followers, and you can even order San Escobar t-shirts. YouTube features the country’s national anthem. And so on and on.

Why has the San Escobar meme proved such a runaway success? Because it allows the many Poles who abhor the increasingly authoritarian tilt of their right-wing government to poke fun at its pretentions of international respectability. Also because the inadvertent naming of the nation might be an indication of the minister’s viewing habits: Narcos, the Netflix series based on the life of Colombian drug lord Pablo Escobar, is very popular in Poland. But San Escobar also plays into an outdated, but persistently popular stereotype of Latin America as a continent composed of interchangeable banana republics, all equally comical in their pompous backwardness. To name just a few other fictional San-Something states:

So, will the San Escobar craze flame out and die off? Perhaps. But, as the tweet below suggests, it is also possible that San Escobar will morph into an anti-government platform (anti Polish government, to be clear), in which case it might have some life in it yet.

Update – many thanks to Andrzej Jaroszkiewicz for sending in the most recent, much more detailed map of San Escobar. Original context here at the Polish newspaper Polytika. 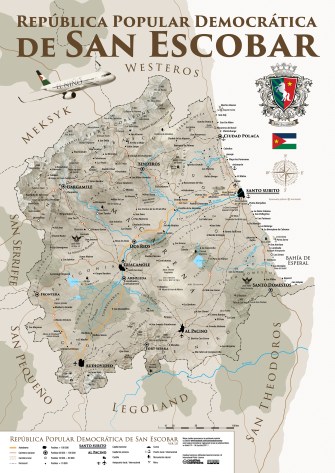 Many thanks to Robert Capiot for sending in this article in Die Welt on San Escobar – featuring a very Julian Assange-esque picture of the Polish foreign minister.

Related
The Present
Even in the age of AI, some problems are just too difficult for computers
Computers are growing more powerful and more capable, but everything has limits
The Future
How the metaverse will revolutionize K-12 and higher education
Imagine going on a tour through the human circulatory system as a tiny cell. That is just one example of education in the metaverse.
Starts With A Bang
Ask Ethan: What are white holes, and do they really exist?
In General Relativity, white holes are just as mathematically plausible as black holes. Black holes are real; what about white holes?
Life
Strange life forms create an “alien” ecosystem in an abandoned uranium mine
Slimy biofilms made up of bacterial and eukaryotic life forms have taken over an abandoned, flooded uranium mine in Germany.
Hard Science
Earth has an eerie “sodium glow,” and astronomers use it to image stars
Air currents in our atmosphere limit the resolving power of giant telescopes, but computers and artificial stars can sharpen the blur.
Up Next
Surprising Science
What Makes People Social? The Answer May Be Found in Petri Dish Brains Made from Teeth.
Research being done with brain organoids (“mini brains” deriving from cells, such as teeth) from those with autism and Williams syndrome is providing insight into what makes humans social.