Pakistan and India are such quarrelsome twins that they don’t even agree on their birthday. Both countries were born from British India, but Pakistan celebrates 14 August 1947 as its independence day; for India, it’s 15 August.

In either case, that’s just over 70 years ago. The media attention for those conjoined anniversaries earlier this year focused mainly on how the joy of independence remains indelibly mixed with the trauma of separation.

But there are many other stories to be told about this vast subcontinent. Here are two sets of maps that provide a different angle on the two nations, celebrating instead life’s rich pageant through two categories for which the region is rightly famous – textiles and food.

In western media, the map of Pakistan is used mainly for three things: to highlight Taliban activity in the frontier zone with Afghanistan, to illustrate tensions over the disputed border with India, or to locate a terrorist attack in one of the country’s big cities.

It’s as if the shape of the country itself can be the harbinger of nothing but misery and death (1). Well, here’s a long-overdue corrective: a map of Pakistan showing the rich diversity of its regional textiles. 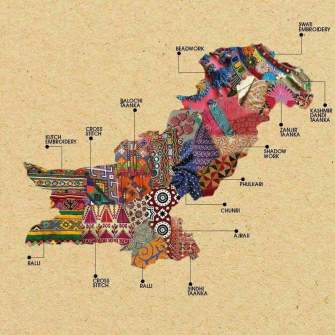 Only colour and beauty here, from the traditional Ralli quilts made in southern Balochistan over the eye-catching Phulkari – embroidered shawls and head scarfs – from Punjab to the Dandi Taanka embroidery of Kashmir in the north, and much in between.

But even the non-political act of weaving fabric is not immune to subcontinental rivalry. As it turns out, this textile map of Pakistan is the twin of a similar map of India, plotted on the same principle: showing the richness of textile variation throughout the country. Only, in India’s case, the mapmaker has made the effort to zoom in on each state’s particular kind of fabric. 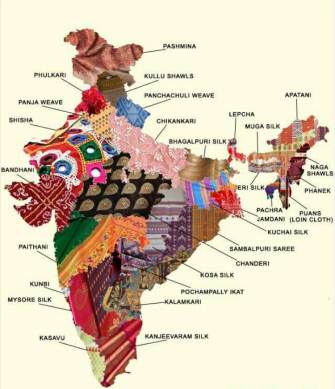 Muga silk, for example is produced only in the eastern Indian state of Assam, and is known as the ‘golden fibre’ – the lustre of its naturally yellow-gold tint increasing with every wash. Bandhani is a tie-dye textile made by the Khatri community of Gujarat, and is characterised by white dots forming patterns on yellow, red, blue, green and black background colours. Kasavu refers to the off-white and gold saree worn by women of the Malayali community in Kerala on the occasion of Onam, an annual summer harvest festival. 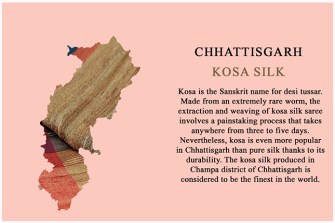 According to Hindu mythology, the Chanderi, the traditional saree of Madhya Pradesh, was first introduced by Lord Krishna’s cousin Shishupal. As in Pakistani Punjab, the Indian part of Punjab is know for the Phulkari, the embroidery of floral motifs on fabric.

The rich variation of this map brought to mind a similar one sent in earlier, detailing the regional origins of the cornucopia of India’s culinary delights. 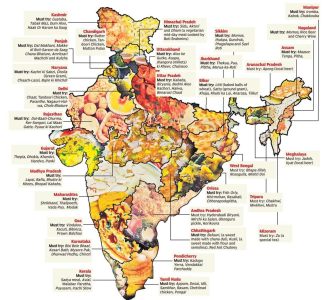 If you’re in Tamil Nadu, you should try the Appam and/or the Pongal, if you have room after the Chettinad chicken. Don’t leave Rajasthan without trying the Dal-Baati-Churma, or the Ker-Sangari, or at least the Pyaaz ki Kachori. When in Delhi, try the Tandoori chicken, or why not the Nagauri-Halwa. In Nagaland, wash your Momos down with rice beer and/or cherry wine.

Of course Indo-Pakistani rivalry being what it is, there is a corresponding map of regional foods on the other side of the border. 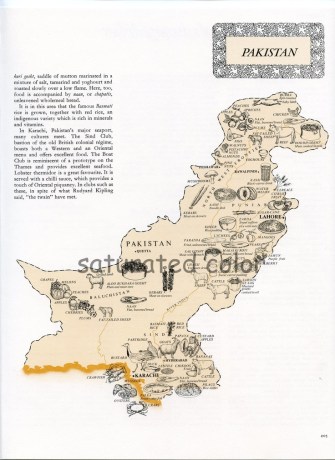 Mussels may rhyme with Brussels, but they’re pretty popular in Karachi too. Balochistan is fruit country, famous for its melons, peaches, cherries and plums. The latter are a key ingredient in Aloo Bukhara Ghost, a local stew. Go to the other side of the country for Sarson Ke Sag, a dish of mustard greens cooked in oil. Slake your thirst in Rawalpindi with a glass of Kanji, or black-carrot drink.

Now, wouldn’t it be nice to show a map of the regional textiles (or foods) of both countries on one map? Or is that too soon, even 70 years on?

(1) Although with some imagination you could detect in the boundaries of the country the name of the Prophet Muhammad, 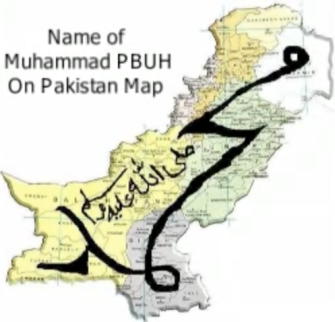 or the figure of a bird, 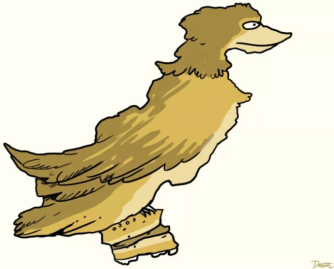 or even a (badly drawn) dinosaur.

India, for its part, looks like a Ghandi in a cape (see #361), or Bharat Mata (Mother India – see #473 for another country coterminous with its mythical female representation). 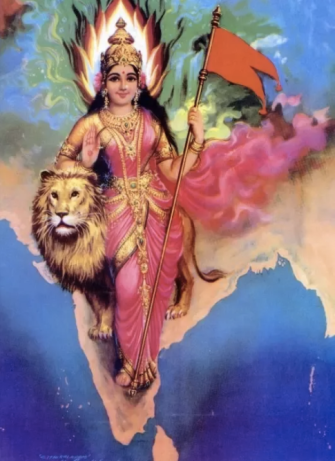 Guess which country has 269% inflation.
Up Next
Starts With A Bang

Ask Ethan: Do black holes grow faster than they evaporate?

When matter falls in, black holes grow. But Hawking radiation says that black holes decay. Who wins?“Maybe that is our mistake: maybe there are no particle positions and velocities, but only […]