In the first quarter of this century, the global centre of economic gravity will shift almost as far east as it has moved west during the entire century preceding World War I. By 2025, the world’s economic centre of gravity will be near Novosibirsk, just north of the Russo-Kazakh border’s eastern end.

Of course, that doesn’t mean that Novosibirsk itself will be the economic centre of the world. Even as Russia’s third-largest city with a population approaching 1.5 million, and as an important industrial hub with over 200 plants, it remains a minor actor on the global economic stage. You won’t find the city straddling the Ob River on any of the usual lists of most powerful cities in the world.

Geographical centres often are no more than cartographic gimmicks without any must-see value on their own, except for the monument that more often than not marks the spot – a gift from chance to the local tourist board (see #498 for an overview of Europe’s many midpoints).

But the evolution over time of a well-defined cartographic point of gravity can be illuminating nonetheless. Take the continuing westward drift of the U.S.’s population midpoint, from Maryland’s eastern shore in 1790 to Wright County, Missouri by 2015 (see #389). It tells of America’s territorial expansions and demographic shifts from east to west and north to south.

By 1820, the global economic midpoint had moved north into Kazakhstan, reflecting Europe’s slow but steady rise, after which the Industrial Revolution and the rise of the U.S. yanked the centre ever further westward – and northward (1): to the Finnish-Swedish border by 1913, to Norway’s Lofoten Islands by 1940 and finally to a spot in the northern Atlantic, somewhere to the east of Greenland.

Perhaps that location requires a monument, windswept and wave-beaten like Rockall, for it marks the western extremity of the global centre of economic gravity; ever since, it has been moving back east again – for the first few decades in relatively small increments, passing south of Svalbard between 1980 and 1990. By 2000, the world’s centre of economic gravity was south of the Russian Arctic archipelago of Franz Josef Land. 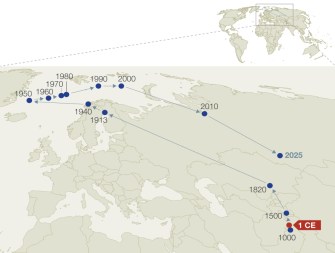 Then, a Giant Leap Eastward: in just ten years, the centre shifted all the way to the mouth of the Ob River, where it widens into the Gulf of Ob. Right now, the midpoint is travelling southeast through Siberia at a speed of roughly 60 miles (90 km) per day, and will meet up with the Ob at Novosibirsk in 2025.

For the reason for the shift eastward, cast a glance at the Top Ten list of countries predicted by the IMF to generate the strongest growth in real GDP in 2016:

Six are in the Far East, three in Africa and one – Iraq, no less – in the Middle East. None are in Europe or the Americas. And the main attractor drawing the global centre of economic gravity eastward isn’t even on the list. With real GDP growth for 2016 predicted at 6.5%, China sits just outside the Top Ten.

If the centre of economic gravity maintains its present course, it looks like it might enter China itself by 2035 or thereabouts. By which time Chinese tourists will have so much money to spend that they might as well go on a frivolous cruise to that curious monument marking the westernmost point of economic gravity, in the freezing seas between Iceland and Greenland.

Image found on the McKinsey Global Institute’s page for its 2012 report titled Urban world: Cities and the rise of the consuming class.

(1) As quoted in the full report: “The economic centre of gravity is calculated by weighting locations by GDP in three dimensions and projected to the nearest point on the earth’s surface. The surface projection of the centre of gravity shifts north over the course of the century, reflecting the fact that in three-dimensional space America and Asia are not only next to each other, but also across from each other.”

Useful clarification by reader Rick Rubenstein: “The center of gravity is actually deep inside the earth, with the projection onto the surface being somewhat artificial, though I suppose that surface point is where such a weighted sphere would come to rest if rolled”.

Related
Health
New blood types are often discovered following medical disasters
New blood types are regularly discovered by an unusual absence or an unusual presence — both of which can result in tragedy.
The neuroscience of loving music
Humans are musical animals four million years in the making, explained by music expert Michael Spitzer.
▸
8 min
—
with
Michael Spitzer
Life
Scientists use CRISPR to insert an alligator gene into a catfish
Disease kills off 40% of farmed catfish. This gene protects them.
Neuropsych
How you breathe affects your brain
Your breathing rhythm influences a wide range of behaviors, cognition, and emotion.
Health
What happens when regular porn watchers abstain for a week?
Researchers watched for signs of withdrawal — but didn’t find any.
Up Next
Starts With A Bang
Hubble’s bubble illuminates the interstellar rubble
A shining bauble among a diffuse cloud of stellar debris has a tremendously interesting physics story behind it.“Truth is tough. It will not break, like a bubble, at a touch; nay, […]