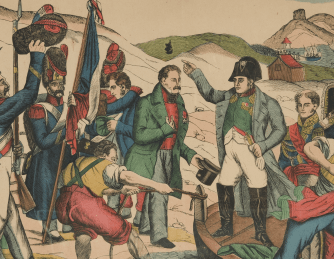 In French history, the period from March 1 to March 20, 1815 is known as Le Vol de l’Aigle: the Flight of the Eagle. The Eagle, of course, is Napoleon – the diminutive Corsican whose political and military genius had propelled him to become Emperor of France, and conqueror of much of Europe.

But at the start of 1815, Napoleon’s glory days were behind him. Defeated by a coalition of European powers, he had been exiled to Elba, a small island off the Italian coast. In France, the monarchy had been restored. On the throne sat a brother of the king who had been executed in 1789. It was almost as if the French Revolution – and the Napoleonic Wars – had never happened.

That state of affairs proved insufferable to Napoleon, who could not content himself with ruling over Elba. On February 26, with a small band of loyal soldiers, he set sail for France in L’Inconstant, a brig disguised as a British ship. Just after noon on March 1, Napoleon landed at Golfe-Juan.

Choosing a route north that avoided the Provence’s most royalist regions, Napoleon and his army reached Grenoble in a mere six days. Having made it this far, Napoleon grew more confident of his gamble: “Before Grenoble, I was an adventurer. After Grenoble, I was a prince.” Known today as the Route Napoléon, the once and future Emperor’s fabled mountain road from the coast to Grenoble is fringed with gilded eagle statues.

As its quick advance proceeded north, the ranks of Napoleon’s army swelled with defectors from the very same royalist forces sent to arrest him – often, these were veterans of Napoleon’s battles across Europe, and their fierce loyalty to their old commander trumped their present duties in service of the king. In Lyon and many other towns, the streets were lined with crowds equally nostalgic for the heydays of Empire.

Riding a wave of popularity and speeding like lightning, Napoleon swept all before him. Without a single shot being fired, he reached Paris on March 20. The king had fled the country. Napoleon was Emperor again… for just about 100 days. On June 18, he suffered his final defeat at Waterloo. Four days later, he abdicated. On July 8, Louis XVIII regained his throne.

Following his failed comeback, recorded in Napoleonic lore as Les Cent-Jours, Napoleon was sent into exile again. This time to a much more isolated island: St Helena, in the middle of the South Atlantic Ocean, where he would die in 1821. 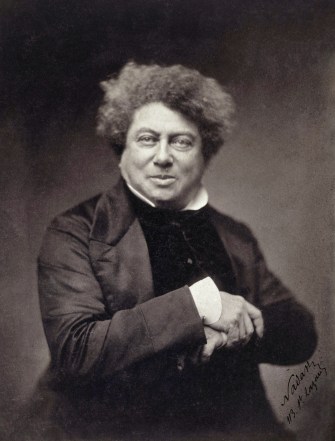 In Une année à Florence (1841), Alexandre Dumas (pictured by Nadar in 1855) took a critical look at the attitudes of the Parisian press to Napoleon’s return.Image: Public Domain

In 1841, Alexandre Dumas père published a travelogue called “Une année à Florence” (‘A year in Florence’). It contained a reflection on the believability of newspaper headlines, based on the reports on Napoleon’s return to power in the Paris-based newspaper Moniteur Universel in March 1815.

As the official journal of the French government, that paper was hostile to Napoleon, at least when he started his campaign. Dumas notes that the attitude shifted as the deposed Emperor approached the seat of power:

“If you want to follow his victory march to Paris, you only have to consult the Moniteur. To guide our readers in this historical research, we will provide a rather curious sample. Step by step, it represents Napoleon’s march towards Paris and shows the change his advance produces in the attitude of the newspaper.”

Dumas then lists ten headlines which prove his point. Below are the original French headlines, plotted on the map are the English translations. For the first time ever, this map provides a spatial dimension to the shifting attitudes of the Moniteur.

Dumas concludes: “This is the ultimate monument to journalism. It need not do anything else, for it won’t do anything better.” 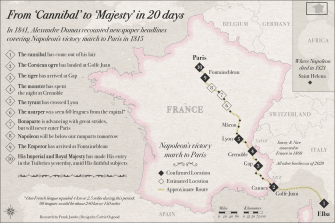 For the first time, a map that shows Napoleon’s lightning march to retake power in Paris, and the headlines that accompanied him there.
Image: Frank Jacobs & Carrie Osgood

The Moniteur Universel was known as le journal de la pensée officielle, i.e. the record of ‘official thought’. Perhaps not so different to the ‘mainstream media’ of today. In fact, some have drawn parallels between the Moniteur‘s initial dismissiveness of Napoleon’s return, and the U.S. media’s inability to comprehend Trump’s march to victory in 2016. For that reason, and to illustrate the larger point that truth and journalism should not be mistaken for each other, the Dumas anecdote is regularly dusted off.

However, the story has another layer – and a two other important lessons about journalism.

Lesson number one: Check your sources. The entire run of the Moniteur Universel can be consulted online via the French National Library, including the relevant daily editions from March 1-20, 1815. They do not contain the titles that Dumas uses. In fact, as the journal of record, the Moniteur mainly published decrees, statutes and ordinances – nothing quite as lurid as the headlines quoted by Dumas.

In Les Cent-Jours: Légende et réalité (1983), French historian George Blond after extensive research is forced to conclude that “although the Emperor was insulted and dismissed as an adventurer or evildoer in some newspaper commentaries, this legendary series of newspaper headlines never did exist.”

Of course, that won’t stop the Dumas anecdote from resurfacing. And that second lesson is perhaps the ultimate one this anecdote can teach us about journalism: that the media – mainstream or otherwise – can’t resist a good story. In the words of newspaperman Maxwell Scott in the John Ford western “The Man who Shot Liberty Vallance: “When the legend becomes fact, print the legend.”

Many thanks to Carrie Osgood, who produced the map to complement Alexandre Dumas’ anecdote. The map is available for purchase on her online store in two versions, the basic map (as shown above) and the map with the story (as shown below). 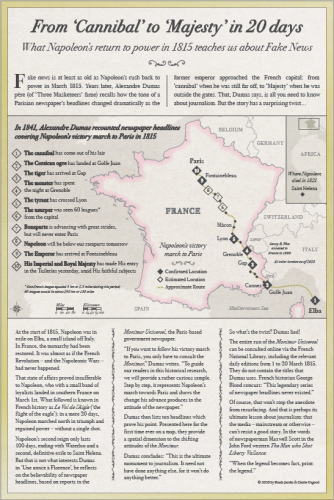 UPDATE: For more on the press landscape in France at the time, check out this episode of The Siècle, an excellent and erudite podcast about France’s stormy century from 1814 to 1914. The episode includes the fascinating story of Le Nain Jaune (‘The Yellow Dwarf’), the satirical magazine that published a joke about Napoleon’s changing nomenclature, which eventually grew into the fake headlines as presented by Dumas.

In the Canaan religion, Yahweh was a lesser god, who was assigned the land of Israel. Here’s how he became “God Almighty.”
Up Next
Starts With A Bang

Is The Matter In Our Universe Fundamentally Stable Or Unstable?

All the matter we know of in our Universe is made of both fundamental and composite particles. However, only a few of the fundamental particles are observed to be stable […]