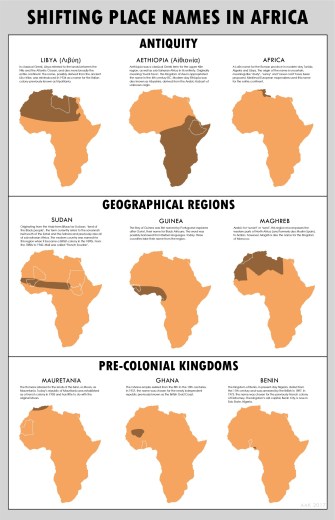 The names of continents are so well-established that we forget how obscure their origins really are. America is named after an Italian explorer, but not the one historically credited with its discovery. Europe and Asia may derive from the Akkadian words for “sunset” and “sunrise,” but there are a host of other etymologies.

And, as these maps show, Africa is just one of the many names that have been used to describe this vast and varied land mass. The maps come in three categories – names of ancient, geographical and pre-colonial origin – and show the areas to which those names apply: dark, for the old version; and outlined, for the current one.

Libya, Ethiopia and Africa are all local names that at one time applied to the entire continent.

Three African countries – and one in Oceania – carry the name Guinea.

Some new African countries adopted the names of kingdoms with ancient pedigree, even if they were located somewhere else entirely.

Tags
africaancient worldhistorymapsstate-building
In this article
africaancient worldhistorymapsstate-building
Related
The Past
The Wild West was lawless and chaotic — and the police helped keep it that way
Lawmen and outlaws were often the same people.
Thinking
6 great philosophers and how they used their political power
Most philosophers merely contemplate the world, but what about the ones who actually tried to change it?
The Past
Ancient migration: Bering Strait land bridge from Asia to North America was not a one-way road
Ancient humans crossed the Bering Strait land bridge from Asia into North America. But some of them went back.
High Culture
Did Paul Cézanne hide an early self-portrait underneath a 160-year-old still life?
To answer that question, we may have to figure out when the famed painter started to go bald.
Strange Maps
Dutch government releases a genuine treasure map from WWII, sparking a hunt for the loot
X marks the spot. The Dutch town of Ommeren has been swamped by detectorists armed with shovels looking for $20-million treasure.
Up Next
Career Development
The unexpected secret to strong leadership? Humility.
One of Socrates’s best-known claims was that “I know that I know nothing.” It’s no fluke that this quote has survived more than 2,000 years or that Socrates is nearly […]