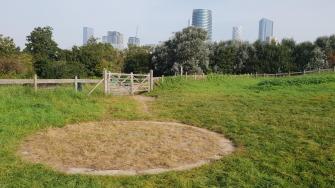 The mysterious stone circle informally known as the Mudchute Omphalos, with the gleaming towers of the Docklands financial district in the background. Credit: Stephen Saleh, reproduced with kind permission.

The British Empire was not founded; it was conjured up by John Dee, Queen Elizabeth the First’s court magician. There are two versions to the tale: either Dee summoned a demon, or he sacrificed Christopher Marlowe, the famous playwright, in a blood ritual.

Obviously, the tale is apocryphal. There is no evidence except the very circumstantial. If the Marlowe version is to be believed, the dark magic ritual must have been performed at the end of May 1593. That is when official history says the playwright met a violent end in a tavern brawl in Deptford, just south of the Thames in the east of London.

That gives us a date. And we also have a place. Stubborn rumor has it that the conjuring was done on the Isle of Dogs, just north of the Thames in the east of London. The exact spot is allegedly marked by a mysterious stone circle, tucked away near an elder grove in the northwest corner of Mudchute Park.

I visited the spot years ago, but going by recent pictures, the location is as unremarkable now as it was then. There is neither a signpost pointing to the circle nor any explanation as to why it is there. It’s just there. Only when you start researching some of the more esoteric aspects of local geography and folklore do the pieces fall into place.

Literally. The stone circle sits on a line that connects a great number of locations with special significance. According to some, that makes it the omphalos, Greek for “navel,” of the British Empire. And that “ley line” – the term for a straight line between prominent landmarks infused with an ‘energy’ of some sort – intersects rather curiously with another one, which links to two major buildings by Sir Christopher Wren.

Does all this add up to proof of John Dee’s ritual? It is a pertinent question, but it gets in the way of a more interesting one: is this a good story? For local writer Stephen Saleh, the answer to the latter is a definite yes. 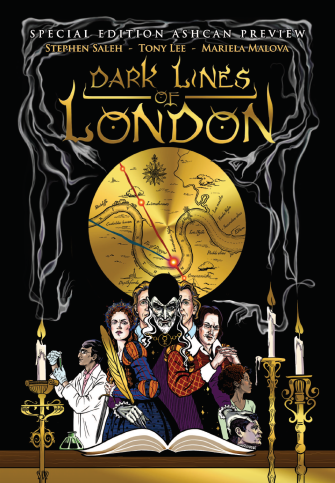 Intrigued by the omphalos rumor, Saleh managed to fit together a whole bunch of puzzle pieces, then neatly sidestepped the first question by using his findings as the basis for a work of fiction. In 2019, he published (with Tony Lee and Mariela Malova) Dark Lines of London, a comic book that turns the omphalos mystery into a time-travelling adventure story that scans like an action-packed Hollywood blockbuster. (Saleh is indeed reworking his story for the screen).

The following is an interview that I conducted with Saleh. It has been lightly edited for clarity, style, and grammar.

Stephen, I found out about the omphalos via an oblique reference in, I think, Fortean Times. How did you find it?

About ten years ago, I stumbled across a story about it on the front page of a local newspaper. I have not seen the article since — if anybody has, let me know — but my interest was piqued. Gradually, I found out more about John Dee, about the omphalos, and about others interested in the same thing.

John Dee is the key figure. What is his significance?

John Dee was Queen Elizabeth’s chief scientist and magician — there was not that much difference between the two roles yet. He was the first to translate Euclid’s works on geometry into English. But he also had an actual crystal ball. You can go see it at the British Museum.

Because he stood on the border between science and magic, Dee was a peculiar and important figure. It was rumored that he had a hand in creating the sudden, violent storm that wrecked the Spanish Armada. Shakespeare, a contemporary, supposedly modelled Prospero from The Tempest on Dee.

Around Dee’s time, there was a secret society called the “School of Night,” which met to discuss science. Known members included Sir Walter Raleigh, Francis Bacon, and Christopher Marlowe. Dee’s name is not mentioned, but I would be very surprised if he was not a member. That society plays a crucial role in our book.

Both in the story and in real life, Dee was an advocate for Britain’s expansion into the New World. He said it was the Queen’s “birthright.” He also was the first to coin the term “British Empire.” Perhaps he took it upon himself to create the psychic conditions for the creation of that empire, establishing the omphalos as its magic center. 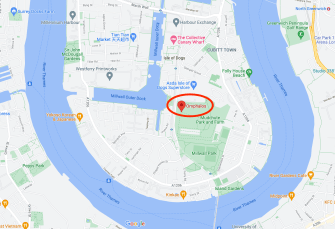 The location of the omphalos on the Isle of Dogs.Credit: Google Maps

And as your research shows, the omphalos is not an isolated point.

There is no official explanation as to who built the circle or why. What is clear, though, is that it is on a ley line that connects a number of significant sites in east London, from Queen Mary’s College at Mile End in the north to All Saints Church at Blackheath in the south.

And if you extend it thousands of miles further north, it passes through the area, now in Canada, where the British were looking for the Northwest Passage. At that time, finding that fabled waterway to Asia was more important to them than actual colonization.

What are those sites, and how are they significant?

To the north, the line passes through St Anne’s Limehouse, one of six churches designed by Nicholas Hawksmoor — and, in fact, right through a mysterious pyramid standing just outside the church building. Its purpose is unknown. It is not a tomb. And it has “Wisdom of Solomon” carved into it.

To the south, the line passes exactly between both wings of the Old Royal Naval College, right on the south bank of the river in Greenwich. It is on the spot where once stood Placentia Palace, the birthplace of Elizabeth I. A bit further south, it passes through the Queen’s House.

The line crosses the Prime Meridian right next to Greenwich Observatory, where that meridian was established. It touches the statue of General Wolfe, who defeated the French at Québec and won Canada for the British.

Also quite remarkable: there were two working nuclear reactors on the line, a few miles apart, on either side of the omphalos. One for research at Queen Mary’s College, which was moved to Stratford in the 1980s — until it had to move from there as well, to make way for the Olympic Park for the 2012 Games.

The other one was at the Old Royal Naval College for training nuclear submarine crews. That one was decommissioned in the mid-1990s. The locals never even knew there was a nuclear reactor beneath their feet. Ironically, that was about the time the local left-wing council had declared Greenwich a nuclear-free zone. 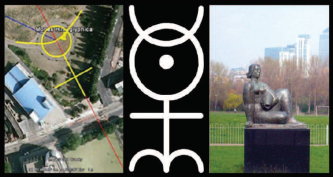 Center: John Dee’s Monas Hieroglyphica. Left: that symbol on the ley line. Right: woman-with-fish statue in the middle of the circle. Credit: Dark Lines of London.

But how does all of that tie into John Dee?

The title of Dee’s key work Monas Hieroglyphica is also the name for a symbol he devised. That symbol can be seen along the ley line.

Also key to Dee’s thinking is the vesica piscis, a symbol from Euclidean mathematics, not unlike the early Christian ichthys sign that stands for both fish and woman. Now, exactly in the circle formed by the Monas Hieroglypica stands a statue of a woman holding a fish. The woman looks straight down the ley line; the fish is looking due south, right at another Hawksmoor church across the river [St. Alphege’s in Greenwich].

The terrain at Mudchute Park is much higher than it was in Dee’s time. So the omphalos is much more recent than Dee’s time.

Back then, that part of the Isle of Dogs was swampland — an excellent place to do magic! As the park’s name suggests, the land here was levelled up with mud dug up a bit further north to create London’s docklands. So the stone circle is actually several meters above the location where Dee supposedly performed his magic ritual.

Which must mean that…

…some people remembered what had happened here and cared enough about it to commemorate the spot. Perhaps the secret society that created the omphalos is still around to guard it. In fact, as you follow the ley line from the omphalos south to the river, you notice that almost the entire stretch is undeveloped: parks, gardens, football pitches.

Did you find any other evidence on the ley line that would indicate recent updates to the line?

Docklands has been completely transformed into a financial district. The biggest building is topped by a pyramid. The southwest corner of that pyramid touches the ley line. The name of that building? Perhaps a coincidence, but it is One Canada Square. Could this be an indication that the actual British Empire has by now been replaced by a financial one?

And on a somewhat smaller scale: near Island Gardens, just before the line reaches the Thames, a road was marked by two triangles on either side, exactly where the line crossed — they have only recently been removed. 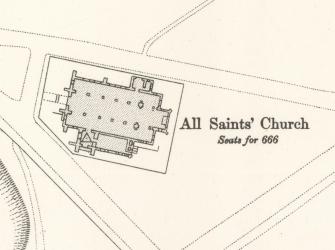 All Saints Church on Blackheath Common, the southern terminus of the leyline, seats exactly… 666.Credit: Dark Lines of London.

What is the significance of the second line, coming in from the west?

Sir Christopher Wren fits the profile of someone who may also have been involved in a secret society like the School of Night. That is why I drew a line between his two most important buildings, St. Paul’s Cathedral and the Monument [a memorial for the Great Fire of 1666]: a dome and a pillar, representing the female and the male principle — as you also find in other world cities, like Rome or Washington DC [which has the Capitol Building and Washington Monument]. Well, if you continue that line further east, it intersects with the omphalos line exactly at the statue of the woman and the fish!

You have unearthed a network of remarkable connections. But what do they mean?

For the uninitiated like us, it is hard to know. And purposely so. Not coincidentally, the very last line of the Monas Hieroglyphica reads: “Here the vulgar eye will see nothing but Obscurity and will despair considerably.”

Will we ever find out?

After we published Dark Lines of London in 2019, a public information sign was put up on Blackheath Common near All Saints Church — by the way, a late-19th century map clearly indicates the church has 666 seats, a curious number for a Christian congregation. The text acknowledges that the church is built on a Grand Axis. To my knowledge, that is the first public acknowledgment of the ley line. I like to think that maybe someone is responding to the publication of our book.

All images from Dark Lines of London reproduced with kind permission. Check out their page here.

A new study suggests that hunting dogs' barks convey emotional information about the animals they see.
Up Next
The Past

The oddly interesting history of boredom

What we can learn from our complicated relationship with boredom.