While they reveal a lot about who mongers weapons to whom, the sequencing on this graph is a bit misleading.

Reader’s instinct nudges us to interpret the maps clockwise from top left, as a series in descending order. But the correct order is anti-clockwise, from bottom left: the top seller is the U.S., followed by Russia, France and China. 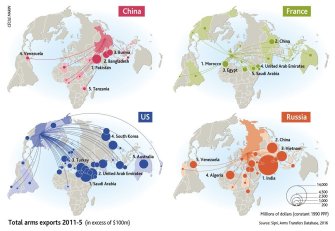 The maps are based on figures for 2011-2015, published by the Stockholm International Peace Research Institute (SIPRI). They exclude weapons trade deals below $100 million. The total volume of arms sales for this period was higher than for any other five-year stretch since the end of the Cold war, in the early 1990s.

The United States not only has the world’s largest defence budget by far (1), it also outsells all other countries by a considerable margin. For the aforementioned period, American weapons exports were worth $46.4 billion, almost a third of the global total (32.8%).

Russia’s amounted to $35,4 billion, representing just over a quarter of the global arms trade (25.3%). The margin between both is more than what numbers three and four each earn on their arms trading: France made $8,1 billion, while China raked in $7,9 billion.

For completeness sake, a quick run-down of the worlds largest arms buyers for the same period: India on one, followed by Saudi Arabia, China, the United Arab Emirates (UAE) and Australia. 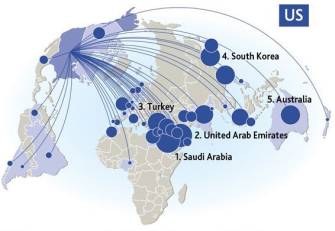 Each of the four maps mentions the five major recipients of that country’s arms exports – providing a peek into each exporter’s geopolitical priorities. As for America, they seem to be in the Middle East, mainly. The five biggest buyers of U.S. military hardware were, in descending order: Saudi Arabia ($4.6 billion), the United Arab Emirates ($4.2 billion), Turkey ($3.1 billion), South Korea ($3.1 billion) and Australia ($2.9 billion).

In all, America sold more than $100 million worth of arms to 42 countries, many of them also in the Middle East, as shown by the graph. For a complete list, see below. 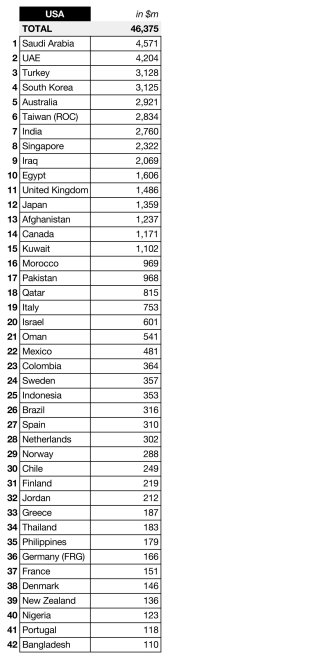 Russia and India have the single-biggest bilateral arms trade relationship in the world, at least for the period described here. From 2011 up to and including 2015, New Delhi bought for $13.4 billion in arms from the Russians. And despite being a major exporter itself, even China acquired a lot of Russian weaponry, to the tune of $3.8 billion. Vietnam stocked up on Russian arms for almost the same amount ($3.7 billion). Other large recipients of Russian weapons were Algeria ($2.6 billion) and Venezuela ($1.9 billion). 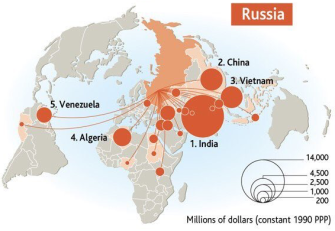 As the complete list of Russian arms sales (>$100 billion) shows, Moscow also supplied arms to India’s rival Pakistan, but a lot more to its neighbour Afghanistan. And a lot more still to Syria. 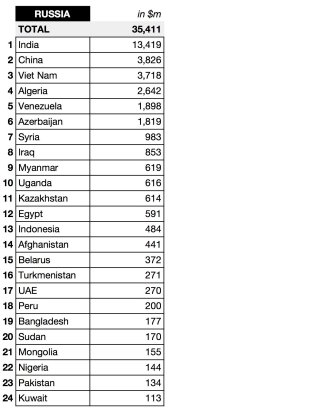 Whereas Russia is a major arms supplier of Algeria, its neighbour and rival Morocco is France’s best weapons client ($1.3 billion). The French also sell a lot of military stuff to the Chinese ($1 billion), and to the Middle East: Egypt ($759 million), UAE ($548 million) and Saudi Arabia ($521 million). 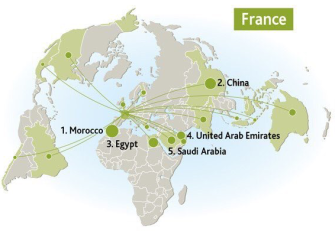 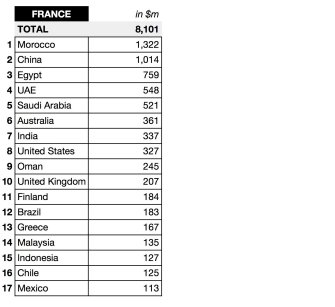 And while Russia arms India, China sells weapons to its neighbours, Pakistan ($3 billion), Bangladesh ($1.4 billion) and Myanmar($971 million). Venezuela is another major recipient ($373 million), as is Tanzania ($323 million). 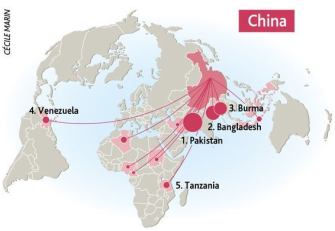 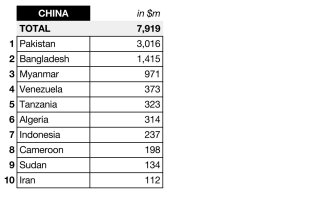 Got a Strange Map? Let me know at[email protected].

Americans are more willing to put the greater good above their own interests today than in the 1950s.
Up Next
Hard Science

NASA scientists discover what two places in the solar system might have favorable conditions for alien life.