On an almost daily basis, Parisians can see rats scurry through the city’s parks, in the metro stations and along its fancy boulevards. When the Seine floods, or when construction work forces them from their underground lairs, the furry creatures roam nearby streets in intimidatingly large gangs. The foreign press regularly features horror stories of Parisian rats attacking tourists (1).

Experts estimate there are 1.5 to 2 rats for each inhabitant of the city, which would mean there could be close to 5 million rats for the 2.3 million people who live within the Paris city limits. Dératisation is a verb every Parisian is familiar with, but the City’s efforts to get rid of the rodents don’t seem equal to the size of the problem.

Geoffroy Boulard has had enough of the half measures. He heads the council of the 17th Arrondissement, one of the 20 administrative subdivisions of Paris, in the northwest of the city.

Work on a new courthouse and a metro line extension has forced a lot of rats to the surface, but his calls to City Hall for sanitation crews to deal with the problem have largely gone unanswered. He accused Paris mayor Anne Hidalgo of not taking the problem seriously. The case of a children’s playground infested with rats was the proverbial straw for him.

Realising that complaining was not enough, Mr Boulard set up signaleunrat.paris (‘report a rat’), a website to collect rat sightings in the 17th Arrondissement. Whenever they spot one or more of the beasties, residents can enter their encounter on a map, where it is marked by a little rat logo (on its back if it’s a dead one).

Collectively, the rat sightings give a good indication of the outline of the 17th Arrondissement. In the bottom right corner: the avatar of Mr Bollard.
Mr Bollard said each sighting would stay on the map until authorities respond, at which point the rats will be replaced by shovels. As of now, the map shows more than a hundred sightings, mostly live ones, and not a single shovel.

Here’s a sample of the sightings reported on signaleunrat.paris.

12 Rue Déodat de Séverac
“A rat running after people and attacking them! Help!”

Rue des Batignolles
“I have it on picture and film if you need it.”

Rue Davy
“Leaving my building, a rat passes suddenly in front of my 2-year-old daughter and me! There are plenty of them in our street. It’s a real problem, especially in the evening”.

25 Rue Cino Del Duca
“Every evening I come across dozens of rats the size of small dogs that run into the buildings!”

42 Rue des Acacias
“A rat enters into 42 rue des Acacias every night! I live at this address and I must admit that I’m fed up with it”.

To be continued – à continuer… 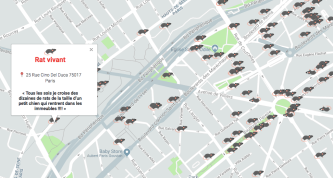 (1) The 2007 Pixar movie Ratatouille shines a more positive light on the rats of Paris, but nevertheless confirms the association between the rodents and the French capital.

(2) When Paris was besieged in 1870 and its population on the verge of starvation, Parisians turned to rats as a source of meat. That didn’t eliminate the problem either.

There is no evidence for God as a “big being.” Is God something else?
▸
4 min
—
with
Bishop Robert Barron
Up Next
Culture & Religion

CDC: Sex and drug rates down among teens, suicidal thoughts up

Health hazards like depression, suicidal ideation, and sexual violence seem to be increasingly prevalent among U.S. teenagers, according to new CDC report.