Russians like a tipple. But some more than others. And quite a few not at all. This annual temperance map, just released by the ‘Sober Russia’ campaign, shows that again this year, Chechnya, Ingushetia and Dagestan (in that order) are the driest parts of Russia.

These majority-Muslim republics in the Caucasus have a ‘sobriety rating’ of 18.75, 19.42 and 20.28, respectively. The rating is a points-based compound of such criteria as alcohol sales, the death rate from alcohol poisoning, the number of crimes committed while drunk, and the number of hospital patients with alcohol poisoning.

The wettest regions are Magadan oblast, in Russia’s Far East; the Nenets autonomous district, in the furthest northeast corner of European Russia; and the republic of Buryatia, bordering Mongolia. Their respective sobriety ratings are 47.89, 46.60 and 43.94.

This map shows the regional distribution of Russia’s alcohol problem. In light green are the ten best-scoring federal subjects of Russia, in dark red the worst performing ones. The legend shows the colour codes for the regions per ten, ranked in between. 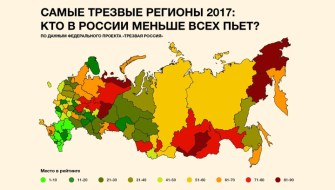 In general, the northern Caucasus and adjacent southern Russia are doing very well: this is the least intoxicated region of the country. Three areas stand out as dangerously drunk: the Far East (including the bit bordering Alaska), the region to the north of Mongolia, and the northeast of European Russia.

Alcohol, or more precisely, alcoholism, is a matter of state in Russia. ‘Sober Russia’ makes the point that sobriety improves the health of the Russian populace, which is the only way to guarantee the continued sovereignty and security of the nation.

The campaign’s annual ratings are meant to prod local authorities into action to better regulate the sale and consumption of alcohol. And indeed, some regions make great progress, points out the Vesti news channel:

“The Kaluga region shot up in the ratings by 21 places, from 37th in 2016 to 16th in 2017. The Yaroslavl region gained 30 places to rank 31st (this year). The Khabarovsk region gained 25 places to achieve 38th. Karela gained 19 places, climbing to 61st, and the Khanty-Mansiysk autonomous district jumped 20 places to 25th. But the Magadan region remains stuck at the bottom of the list, with the worst alcohol problem (of all Russia)”.

The greatest leap forward was made by the Yaroslav oblast, which climbed 30 places to 31st, and a sobriety score of 33.65. The biggest loser was the republic of the Crimea (recently annexed from Ukraine), which dropped 23 places to 52nd, and a score of 36.10.

Map found here at Vesti. See also there for the complete ranking (in Russian only).

Related
Starts With A Bang
The quantum reason why neutral atoms first formed
If it weren’t for the intricate rules of quantum physics, we wouldn’t have formed neutral atoms “only” ~380,000 years after the Big Bang.
Hard Science
Some earthquakes last for seconds, others for minutes — and a few for decades
What do you call it when the Earth shakes for three decades?
Sponsored
What childhood “money story” is shaping your financial behaviors?
Here are the signs that you inherited “money anxiety” from your parents.
The Present
The “maritime Indiana Jones” who salvages shipwrecks now wants to tow icebergs
Simple physics makes hauling vast ice chunks thousands of miles fiendishly difficult — but not impossible.
Neuropsych
Inside the brains of aging dogs
In a citizen science project, thousands of pet dogs are helping scientists to understand what happens to memory and cognition in old age.
Up Next
Health
Does smoking weed make people creative, or do creative people smoke weed?
A new study investigates if pot smokers outperformed nonsmokers in creativity.