There’s something off about this map. And it’s not just the more than 200 pairs of dog’s eyes staring back at you.

It’s a map of the world, but a very peculiar one: some countries and continents are promoted to bigness, while others are deflated and moved, or removed altogether. Why the bizarre re-arrangement?

Could this be the work of a rabid anti-Peters projectionist? German cartographer Arno Peters in the 1970s adapted the traditional world map to counter the Eurocentrism implicit in its Mercator Projection. His map magnified Africa and compressed Europe and North America.

This map not only reverses that process but swings the pendulum way past Mercator. North America appears to be at least twice the size of South America (1) and Britain alone is almost as big as both combined. The rest of the land mass is mostly Europe, with France and Germany taking up a disproportionate amount of space. The Low Countries (2) together are a bit smaller than both, but easily as big as South America. 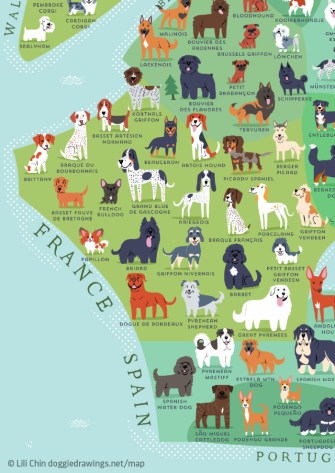 Africa is smaller than Germany and tucked away under Italy’s heel. The Arabian Peninsula is minuscule. In an atrophied Asia, China and India remain the only countries of note, but each would easily fit in France.

Japan, usually twice as big as Britain; and Australia, in reality, a few sizes bigger than Switzerland, are among the many other short-changed localities. The key to the contorted geography: all those doggies on the map. 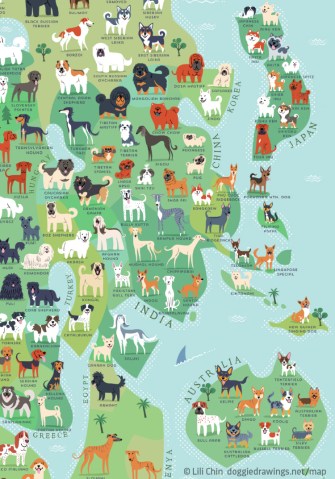 The map concentrates on the source locations of the dog breeds it portrays. And some regions of the world have been more prolific at breeding dogs than others. The World Canine Federation (FCI) recognizes around 350 dog breeds (some are in the ‘waiting room’), not all of which are represented on this map. But that roll call, ranked by country of origin, gives an indication why some of the lands shown are larger than others.

Great Britain and France are the ground zero of dog fancying, with 57 registered breeds each (and yes, they include the bulldog (3) and the poodle, respectively). Germany is not far behind, with 47 breeds, including the German shepherd, but also the Great Dane. These three countries alone represent more than 40% of all dog breeds recognized by the FCI. Add in the rest of Europe, and the figure rises to well over 80%.

Talking about Eurocentrism: the map shows many but not all of the dog breeds recognized by the FCI but has had to resort to non-recognised breeds to fill up other parts of the world. The World Canine Federation acknowledges only 11 breeds from the U.S. (e.g. the Black and Tan Coonhound and the American Cocker Spaniel) but the map shows more than double that number (the Catahoula and the Blue Lacy, for example). 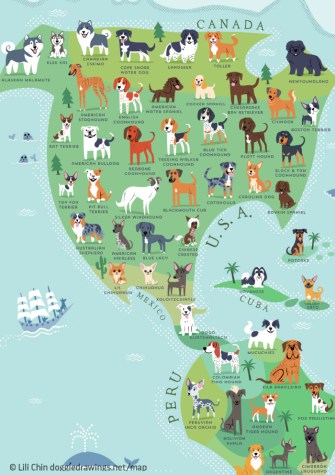 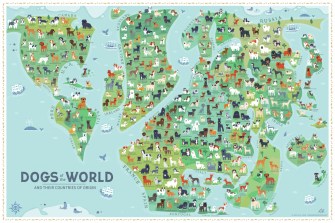 (2) Belgium and the Netherlands; tiny Luxembourg, usually included (hence the modern acronym Benelux), is left off the map here, for reasons which will become apparent.

(3) Next to the “traditional” English bulldog, there’s also a breed of French bulldog.

Related
Starts With A Bang
Ask Ethan: What are white holes, and do they really exist?
In General Relativity, white holes are just as mathematically plausible as black holes. Black holes are real; what about white holes?
Life
Strange life forms create an “alien” ecosystem in an abandoned uranium mine
Slimy biofilms made up of bacterial and eukaryotic life forms have taken over an abandoned, flooded uranium mine in Germany.
Hard Science
Earth has an eerie “sodium glow,” and astronomers use it to image stars
Air currents in our atmosphere limit the resolving power of giant telescopes, but computers and artificial stars can sharpen the blur.
Health
How saliva changes the flavor of food
“It’s a liquid, but it’s not just a liquid.”
High Culture
Why are flood myths so common in stories from ancient cultures around the world?
Could the prevalence of flood myths around the world tell us something about early human migration or even the way our brains work?
Up Next
Culture & Religion
Stay-at-home moms work the equivalent of 2.5 full-time jobs, survey finds
This is no surprise to moms everywhere. Raise glass of wine for all of the caregivers out there! Cheers.