Tip a Japanese waiter, and they’ll be insulted. Don’t tip an American one, and you’ll get the same result.

A gratuity, the amount paid on top of the actual bill, is typically paid directly to restaurant and bar staff, taxi drivers, hotel workers and other service personnel.

Although essentially a voluntary appreciation of the quality of services rendered, tipping has become customary or even expected in some countries. In others, it’s positively frowned upon. So where should you pay – and how much? This map should keep you out of trouble. 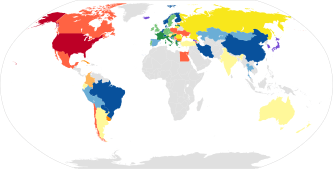 Oh, and remember, in some cases, tipping is illegal: don’t ever try to offer a gratuity to government workers – that’s bribery! (See #863).

UPDATE – whototip.net is a comprehensive guide to gratuities per country and per sector (restaurants, hotels, tour operators, etc.) It also provides information on whether cash payment is preferred. Thanks, David Weintraub!

Evolutionary game theory could tip the advantage to medicine.
Up Next
Technology & Innovation

Researchers develop a next generation technique to control individual neurons in the brain, paving a new road towards curing brain disorders.