Should police officers be able to get away with having sex with detainees? That seems like a no-brainer—no, they shouldn’t. Cops have badges, guns and—at least presumptively—the law on their side. Detainees may have inalienable rights but, because they are being held against their will, often feel powerless and anxious. In those circumstances, there is no way to distinguish consent from coercion.

For prison guards, probation officers and other professions with an inbuilt imbalance of authority, nationwide prohibitions against sexual contact between officials and their captive clients are in place. Not so for police officers. In these 35 states, cops caught having sex with detainees can claim consent was given. Often, the courts agree.

This map, produced by Buzzfeed, was prompted by the story of Anna Chambers. One September night last year, two plainclothes NYPD detectives sniffed out that she and two male friends were smoking weed. The boys were sent off, Anna was handcuffed and led into the back of a police van. She claims she was told to undress and raped by the two officers.

DNA collected at the hospital after the incident matches that of the two detectives, who have since left the NYPD and have been charged with rape. Despite material evidence of sexual intercourse, this is not an open-and-shut case. There is no federal provision against police officers having sex with persons in their custody, nor does the State of New York have any such law on its books.

Considering the evidence, that is a glaring omission. Reports by the Cato Institute indicate that sexual assault is the second-most reported form of police misconduct in the U.S., after excessive use of force.

In 2015, after a year-long investigation, the Associated Press revealed that in the six-year period from 2009 to 2014, about 550 police officers had lost their badges for rape, sodomy and other types of sexual assault; and a further 440 for possession of child pornography and other sex crimes; or sexual misconduct such as propositioning citizens, sexting juveniles, or having consensual but prohibited sex while on duty.

That number was “unquestionably an undercount because it represents only those officers whose licenses to work in law enforcement were revoked”, wrote the AP. “Not all states take such action”.

The perpetrators included state and local police, sheriff’s deputies, prison guards and school resource officers (no federal officers were included in the survey). Victims included motorists, schoolchildren, women in legal trouble, police interns, and prison inmates. About one-third of the de-certifications resulted from incidents with juveniles.

The AP article cited a 2011 report by the International Association of Chiefs of Police, suggesting the job itself creates both the opportunity for sexual misconduct by police officers – given their power, independence, irregular hours and interaction with people deemed less credible – as well as offering them cover after the fact, via the loyalty that impels officers to shield each other from accusations.

Warning that “tolerance at any level will invite more of the same conduct”, the IACP recommended that policies specifically address sexual misconduct by serving police officers, as well as perform more stringent screenings of candidate police officers.

Having recognised the loophole and its deleterious effects, a number of states have taken steps to close it – albeit fairly recently in some cases: Oregon in 2005, Alaska in 2013 and Arizona in 2015). The other 13 are Washington, California, Arizona, Utah, Hawaii, North Dakota, Indiana, Ohio, Connecticut, New Jersey, North Carolina, Georgia and Florida. 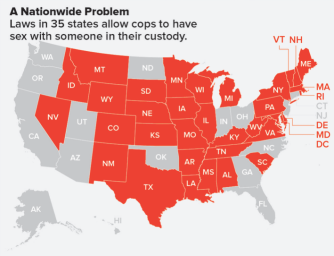 In the other 34 states, plus DC, police officers can claim they were ‘seduced’ into having sex by detainees. It is not unlikely that the defendants in the Anna Chambers case will use that line of defense when the case goes to court in the next few months.

In quite a few previous cases, that strategy has paid off: since 2006, at least 26 officers have been acquitted or have had charges dropped based on the ‘consent defense’.

Meanwhile, the Anna Chambers case is spurring change – no doubt also linked to the outrage and revelations following the Weinstein case. The hashtag #policetoo has started to trend. Nationwide, more than 20 police officers have resigned or were fired because of alleged sexual misconduct. And a New York City councillor is proposing a bill to make sex between a police officer and anyone in their custody illegal in New York City.

None of which changes the fact that the defense attorneys in the Anna Chambers rape case are dredging her past and social media posts for ‘dirt’ and will likely call her testimony in question in cross-examination, in line with the defendants’ current claim that there was “no non-consensual sexual encounter”.

Seen a strange map? Let me know at [email protected].

Related
Life
Strange life forms create an “alien” ecosystem in an abandoned uranium mine
Slimy biofilms made up of bacterial and eukaryotic life forms have taken over an abandoned, flooded uranium mine in Germany.
Hard Science
Earth has an eerie “sodium glow,” and astronomers use it to image stars
Air currents in our atmosphere limit the resolving power of giant telescopes, but computers and artificial stars can sharpen the blur.
Health
How saliva changes the flavor of food
“It’s a liquid, but it’s not just a liquid.”
High Culture
Why are flood myths so common in stories from ancient cultures around the world?
Could the prevalence of flood myths around the world tell us something about early human migration or even the way our brains work?
The Future
Space travel will radically change human psychology and spirituality
We are traveling in a realm that once exclusively belonged to the gods. Space travel will force humanity to rethink everything.
Up Next
Mind & Brain
Confabulation: why telling ourselves stories makes us feel ok
When we don’t know the reasons behind our choices, we confabulate.