All your Christmas presents have been opened, and you haven’t even gotten that perennial staple of seasonal gifts, new socks – let alone any other new clothes. That may be just as you like it. Perhaps you’ve made it abundantly clear to your nearest and dearest that gift certificates are the best way to avoid disappointment.

But according to Norwegian folklore, a lack of sartorial renovation at yuletide sets you up for all kinds of mayhem and mischief. The effects of a no-new-clothes Christmas vary greatly, depending on the region where such an eventuality occurs. None of them, however, are very positive. As this map shows.

Some punishments are fairly mild. On part of the island of Smøla and in a few communities scattered along the Norwegian coast, you must kiss the church’s bell-ringer (light brown). In a few other coastal areas, an area in south central Norway and another on the Swedish border (light blue), you have to sit on the doorstep. And in an area around Oppheim and another one further inland (light green), you’ll have to spend some time alone in the barn. 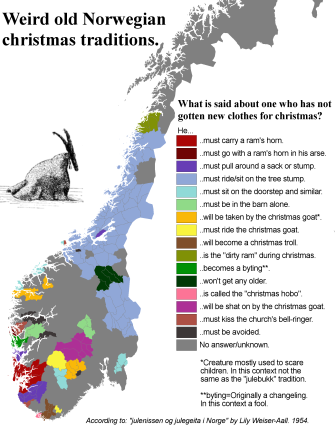 In two large areas in southeastern and mid Norway, you must sit (or ride) on a tree stump, while in a small area in surrounded by stump-sitting territory, but also a larger area in the south, near Stavanger (purple), you have to pull around that stump (or a sack) around. In a small area on the southern coast, appears to be Spangereid and environs (pink), you get called a ‘Christmas hobo’. And in a few small areas scattered across Norway (black), other revellers will avoid you. Like the Christmas hobo you are.

Worse things happen in Vest-Agder county (brown), where you turn into a Christmas troll, and in and around Bergen, where your transmogrify into a byting (a changeling, or a fool). In the northern part of Hedmark county, you won’t get any older – which could be a good thing (if you remain young forever) or a bad thing (if you die).

Some season-appropriate consequences involve what appears to be Norway’s favourite Christmas animals – not reindeer, but goats and rams.

In the southern part of the Salten district, south of the Saltenfjord (olive green), you’ll only have to suffer being called a ‘dirty ram’ during Christmas. Around the Boknafjorden in southern Norway, including Stavanger (red), you’ll have to carry a ram’s horn. As you will in a few isolated islands off the central coast (burgundy), only ‘up your arse’.

Here’s hoping you at least got a scarf, or some gloves.

Related
Hard Science
Some earthquakes last for seconds, others for minutes — and a few for decades
What do you call it when the Earth shakes for three decades?
Sponsored
What childhood “money story” is shaping your financial behaviors?
Here are the signs that you inherited “money anxiety” from your parents.
The Present
The “maritime Indiana Jones” who salvages shipwrecks now wants to tow icebergs
Simple physics makes hauling vast ice chunks thousands of miles fiendishly difficult — but not impossible.
Neuropsych
Inside the brains of aging dogs
In a citizen science project, thousands of pet dogs are helping scientists to understand what happens to memory and cognition in old age.
Neuropsych
The most common source of awe might surprise you
It’s us.
Up Next
Starts With A Bang
Astrophysics Reveals The Origin Of The Human Body
It isn’t the Big Bang or stars like the Sun that gave rise to us. The story is far more… explosive.At the smallest level, the human body is made up […]