Do you enjoy ‘non-traditional sexual relationships’? Then mind where you travel.

Over the last two decades, same-sex marriage and legal protection for the LGBTI community has become commonplace throughout many countries. But that has only widened the gulf with other parts of the world, where homosexuality remains illegal, criminal and in some cases even punishable by death.

This map was published by the Australian company Travel Insurance Direct as a risk guide for lesbian, gay, bisexual, transsexual and intersex tourists and travelers.

Coded in the colors of the rainbow flag, the map ranks countries from places with the broadest legal recognition and protection (purple) to those where the law is used to prosecute rather than protect LGBTI people (red).

Here’s an overview, following the color scheme of the map, going from worst to best. 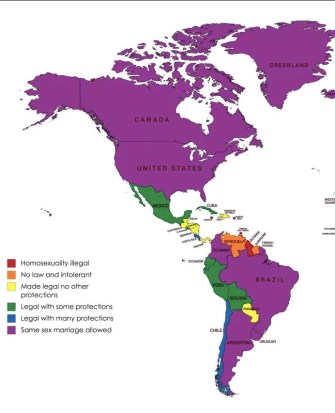 Homosexuality is illegal in ‘red’ countries. There are specific laws against same-sex acts, which can land you in jail. This is the case in the following countries:

‘Orange’ countries have no laws on their books against homosexuality as such but are considered intolerant towards LGBTI people. Here, LGBTI travelers can expect discrimination, prejudice and intolerance both from government officials and in society at large. These countries include popular destinations such as Vietnam and Madagascar, and also:

Yellow means homosexuality is no longer illegal in these countries, but they do not provide any legal protection specifically for LGBTI people either. That lack of official support often signals pervasive hostility in society against LGBTI people. 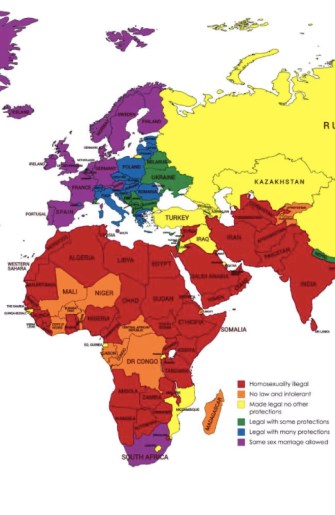 In ‘green’ countries, homosexuality has been legalized and some legal protection for LGBTI people is provided, often by applying general anti-discrimination laws.

‘Blue’ countries have legalized homosexuality and offer a wide range of legal provisions for LGBTI people – but not all. They do not (yet) have same-sex marriage, for example. They are: 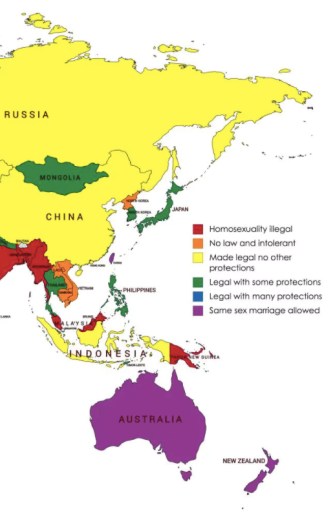 Of course, cultural acceptance of LGBTI people can often be at great variance with the legal situation. For instance, in Russia, lesbian sex has never been illegal and male homosexuality has been legal since 1993. Yet being openly gay in Russia often leads to discrimination and violence. A Russian law against the ‘promotion of non-traditional sexual relationships’ to minors can be used to target LGBTI activists.

But, as plenty of LGBTI people know all too well, they don’t need to travel far to encounter discrimination, or worse. A 2015 report by the UN listed hundreds of hate crimes against LGBTs around the world, concluding that they suffered “pervasive violent abuse, harassment and discrimination” in all regions of the world – including in ‘purple’ countries.

Brazil, for example, reported 310 documented murders in 2012 in which homophobia or transphobia was a motive. The Organization of American States reported 594 hate-related killings of LGBT people in its 25 member states between January 2013 and March 2014. And in the U.S., the report states, bias-motivated crimes based on sexual orientation rank second only to racist incidents in the hate crime category.

Among the report’s recommendations: investigate and prosecute alleged hate crimes, prohibit incitement of hatred and violence on the ground of sexual orientation and gender identity, and change laws to remove offenses relating to consensual same-sex conduct. Or in terms of this map: more purple, and deeper purple.

(1) Only applies to Muslim men.

(2) For a third conviction.

(3) Only in local jurisdictions that have adopted sharia law.

Related
Starts With A Bang
The path forward for astronomers and native Hawaiians
A history of injustice and the greatest natural location for ground-based telescopes have long been at odds. Here’s how the healing begins.
Thinking
“Give a f***, actually”: The surprising benefits of being grateful for things you dislike
Radical Emotional Acceptance calls on you to celebrate all of life’s emotions — even the negative ones.
Thinking
Visual thinking: How to understand the inner lives of animals
Humans are good visual thinkers, too, but we tend to privilege verbal thinking.
Strange Maps
The world’s longest straight line connects Portugal to China
It’s nearly 20,000 miles long.
The Well
This is what the fourth dimension looks like
Left–Right, Back–Forth, Up–Down. What’s the fourth dimension?
▸
3 min
—
with
Brian Greene
Up Next
Starts With A Bang
New Podcast: Hawking’s Greatest Discovery
Ever hear of Hawking radiation? Or the black hole information paradox? Time to get your fix!In memory of Stephen Hawking’s life, I’ve decided to share the physics behind his greatest discovery: […]