Here’s an Indian specialty you’ve never heard of — Human Maps. How do you make one? Gather a lot of humans, arrange them into a map of your country, take their picture from a high vantage point, and presto!

It’s actually quite befitting the world’s biggest democracy that it has a thing for this mass-participation mix of photography and cartography. And subcontinental rivalry being what it is, the phenomenon is also popular in neighboring Pakistan and Bangladesh. But the country of origin for this bizarre pastime is, of course, the United States.

The oldest known example is this Human Map of the U.S.A., produced circa 1925. It shows what must be several thousands of people seated to produce a map of the United States. The outline of the states is formed by women wearing white, with the padding provided by men in dark uniforms. Seating arrangements have been carefully laid out to compensate for the camera’s angle. Even though the field on which the cartographic extras are positioned slopes back, this appears to be a perfectly top-down view of the State of the Union around that time (Alaska and Hawaii would join only in the late 1950s). 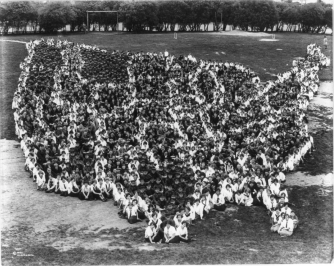 E Pluribus Unum: a Human Map of the U.S.A. (Image: Library of Congress)

It is unknown where or why this picture was taken. The closest indication of origin is the fact that its (expired) copyright was held by Morton & Co. of San Francisco. However, it does seem these crowd-participating, perspective-compensating images were popular at the time. As this article explains, the British-born photographer Arthur Mole (1889-1983) was the pioneer (or at least the populariser) of this technique. 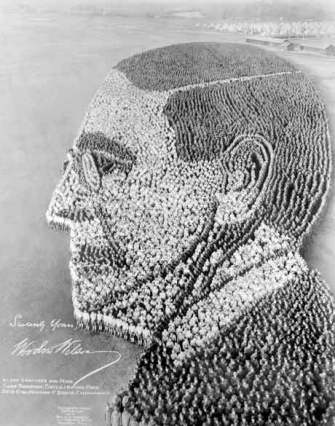 In the late 1910s, Mole produced a number of these so-called “living portraits,” usually depicting American patriotic themes, such as the Statue of Liberty, military insignia or even the face of President Woodrow Wilson. For The Human Liberty Bell, Mole assembled 27,000 troops stationed at Camp Dix in New Jersey in the shape of that national icon. 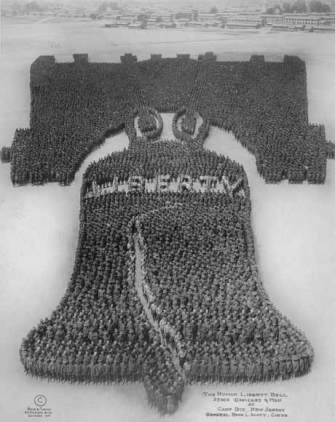 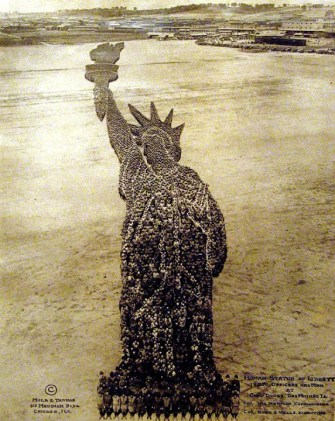 Although there are only 17 men at the base of this Statue of Liberty, it took a total of 18,000 men to compose this image — 12,000 just for the torch, the tip of which is half a mile away from the base. (Image: Punjabi Portal)

However, it is unclear whether the aforementioned Human Map was produced by Arthur Mole himself or by an anonymous imitator. In either case, the 90-year-old cartographic trope has spawned numerous imitations of its own. Like this undated update. 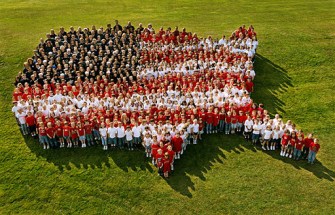 The color image, the liberal use of jeans and T-shirts, the overall whiteness of the crowd: All somehow suggest an early 1980s picture. Note the differences with the previous map. Florida sticks out too far; Maine seems amputated. No attempt has been made to compensate for the skewed perspective. Clearly, Human Maps of America weren’t what they used to be. 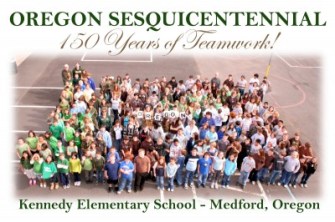 Another example of the dying art is this Living Map of Oregon, produced in 2009 on the occasion of the 150th anniversary of the founding of the state. Boxy, small, expressionless. By that time, America obviously no longer was the world’s Number One Living Map producer. Indeed, the center of gravity for Living Maps had already moved elsewhere. 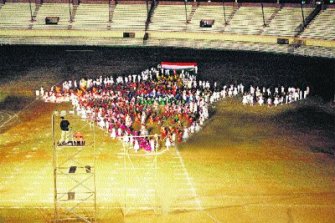 Students from Dayanand Anglo Vedic Public School in Airoli (Mumbai) set a record in 2008: They made the biggest Living Map of India so far, with 870 students and 80 teachers, measuring 52 by 37 meters. 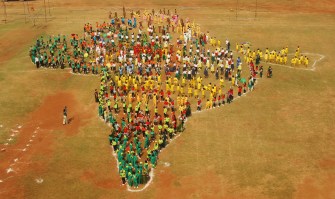 But the record didn’t stand for long. In 2009, 1,100 children of Lokpuram Public School created this Living Map of India, measuring 65 by 45 meters. It made it into the India Book of Records as the Biggest Human Map of India. 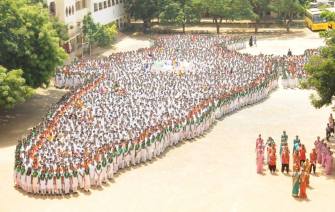 And that record was broken in 2014 by I.H.M. Girls Higher Secondary School in Avadi (Chennai): Just under 4,000 students (and 80 staff) created an even bigger map of India (although the website doesn’t mention its measurements). 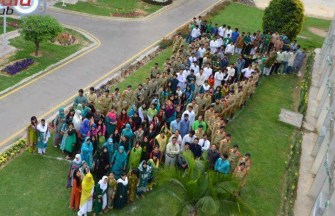 The intense rivalry between India and Pakistan — enemies like only siblings can be —  also extends to the field of Living Maps. Symbolically flanked by soldiers on its eastern border with India and its western one with Afghanistan, this map of Pakistan is still relatively modest in size. 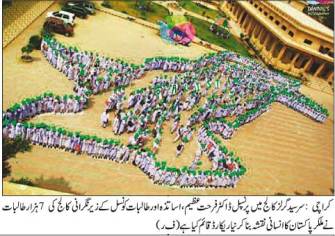 This one, produced by Sir Syed Government Girls College in Nazimabad, was made with the help of what appears to be a few hundred students, dressed in white, holding a green piece of cardboard over their head. Several news outlets ascribed no less than 7,000 students to the map; judging from the picture, that seems a bit much. 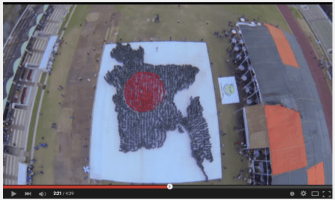 Not to be outdone, Bangladesh, on the other side of the subcontinent, also produced a Living Map of itself, courtesy of Exim Bank. It’s not like they’re not used to similar stuff in Dhaka and environs, as the Bangladeshis last year also produced the world’s biggest flag. 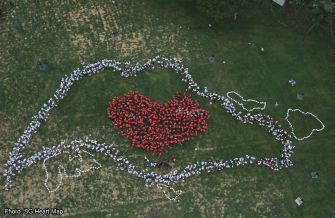 Staying in the area, this Living Map of Singapore is the result of 1,000 Singaporeans coming together in a local park earlier this year, decked out in the country’s national colours, a white outline and a red center. The map was produced as part of Singapore’s 50th anniversary celebrations. 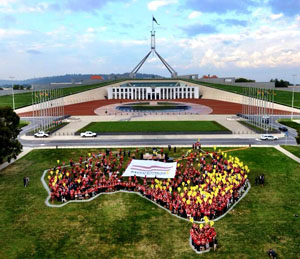 The only Map of Oz featuring humans in the middle. (Image: The University of Sydney)

Moving just a bit farther south, here is a Living Map of Australia, the culmination of a student-driven Roadtrip to End Poverty, back in 2013. If Living Maps seem particularly prevalent in the area between the Hindu Kush and the Tasman Sea, that doesn’t mean other parts of the world don’t partake in the curious practice. 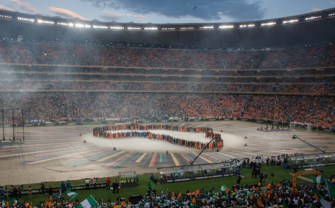 This Living Map of Africa was formed at the closing ceremony of the Africa Cup of Nations (soccer) in South Africa. 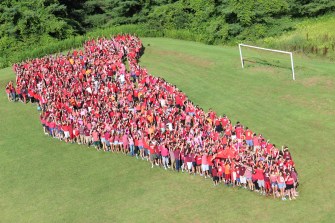 This Land is My Land. (Image: Union of Reform Judaism Blog)

And in July 2014, this Living Map of Israel was formed by participants of Eisner Camp, a youth summer camp organised by the Union for Reformed Judaism in the U.S. The map was meant to demonstrate the participants’ solidarity with the Jewish state, then involved in its most recent military conflict with Gaza, but the inclusion of the Occupied Territories without so much as a line of similarly bloused map participants to indicate the Green Line provoked some criticism. As one commenter noted:

“Are these kids being taught the difference between the State of Israel and the Land of Israel? What right do we have to complain about Palestinian maps that don’t show Israel when we educate using these boundaries and not the state’s?” 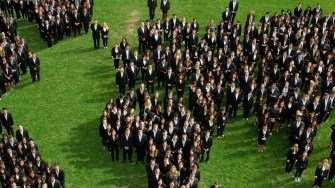 One world, one people. (Image: We Are Les Roches)

One way to avoid contention over the outline of your mass-participation country map would be to zoom out — and zoom out a lot — to create a Living Map of the entire world. No boundaries, only people. Perhaps – one hopes – this is the future of mass-participation mapping.

Related
Neuropsych
Psychology studies that go viral are likelier to be bogus
A new 20-year analysis of over 14,000 psychology studies finds that a study’s media coverage is negatively linked to its replicability.
The Future
How a device transmits radio waves with almost no power
Apart from the energy needed to flip the switch, no other energy is needed to transmit the information.
The Present
Radical idea: Redraw the U.S. map as a nation of city-states
While cities drive national economic growth, their political geography means they cannot effectively deal with inequality, poverty, and other socioeconomic problems.
The Learning Curve
Why do high IQ people stagnate in their careers? Emotional intelligence
Research suggests that emotional intelligence is more vital for success than IQ.
The Present
Even in the age of AI, some problems are just too difficult for computers
Computers are growing more powerful and more capable, but everything has limits
Up Next
Technology & Innovation
Google Neural Network Produces Psychedelic Imagery
A look at the implications of a promising discovery by researchers at Google.