They’re taboo for newsreaders and other public speakers, but the rest of us use filler words whenever our brain needs to catch up with whatever we’re saying. Which at least in my case is, uh, fairly frequently.

Although we use these words thoughtlessly, they’re not without cultural context. They vary widely between languages, for instance. Which is a bit weird for such seemingly automatic interjections. The Danish øh and the Greek εμ may resemble the English uh and um, but that is certainly not the case for wallahi (Arabic), niinku (Finnish), Þúst (Icelandic), znači (Serbian) or paatheenga-na (Tamil).

And of course each language has a range of filler words, often with connotations for region, class or age. If you want to sound intellectual in Hungarian (and let’s face it, who wouldn’t), you’ll fill the pauses in your sentences with ha úgy tetszik instead of the more common asszongya. Using ke’ilu in Hebrew marks you out as a somewhat younger speaker, not unlike like in English.

You would think that the two most common filler words in English – uh and um – would be totally interchangeable, being so short and sounding so similar. But we wouldn’t live in the Information Age if we couldn’t crunch a heap of data that says otherwise. 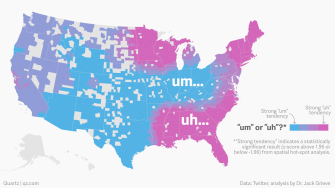 Is that, um, a bulge in your pattern or are you just happy to, uh, see me? (reproduced with kind permission from Quartz)

This remarkable map, the result of a thorough screening of 6 billion words on Twitter, shows that there is, in fact, an um/uh divide running through the United States. Assuming that the twitterverse is sufficiently colloquial for people to write uhs and ums where they would say them, we see Uh Country dominating the Deep South, New England, Minnesota and Wisconsin. Um Land stretches from Ohio and Kentucky in the east to Arizona and Wyoming out west. The West Coast is undecided, except, uh, for the Bay Area and, um, a contiguous coastal zone between California’s north and Oregon’s south (a.k.a. the State of Jefferson, see #458).

Some states are completely torn up between both fillers – neither of which, fortunately, sounds like a plausible rallying cry. The northwestern half of Arkans-uh is decidedly um-minded. Tenn-uh-see is facing an um-vasion from the north and particularly in the northeast. The southern half of Iow-uh is completely um-ified, as is the southern half of Michigan’s Lower Peninsul-uh.

The question, of course, is: what other data does this seemingly trivial divide correspond with? Could it be the Appalachians (if you haven’t tired of the gimmick yet: Uh-palachians) keeping Um Country from reaching the coast? Is the Minnesotan preference for uh a residu of the øh imported by Scandinavian immigrants? Is the West Coast a mix of both or do they simply prefer, like, other filler words? And, finally: who’s winning? Will the um bubble in the Midwest burst, or will it eat into the northern and southern wings of the uh pincer?

The data for these maps was compiled by Dr. Jack Grieve, a forensic linguist at Aston University in Birmingham (UK), and Mark Liberman, a fellow linguist with a long-standing interest in the um/uh divide, who earlier posited that women are more likely than men to use um over uh.

As linguists, the data made more sense to them than to this, uh, mere cartographer. The Midwestern um bulge largely corresponds to the so-called Midland American English dialect, which stretches from central Pennsylvania along the Ohio River valley into the West. In fact, according to Dr. Grieve, this is the first time he’s been able to pin down the elusive Midland dialect on a map.

For more on this subject, see the this article at Quartz. Dig even deeper with this article by Mark Liberman on Language Log. For more on Dr. Grieve’s work, including a map of the recently popularised word thottie, see his homepage and his blog.

The Netflix show about a Birmingham crime family and their personal demons concluded earlier this month.
Up Next
Surprising Science

Indentured Insomnia: Why the Poor Can’t Sleep at Night

Being poor results in sleeping less for a variety of reasons. One major factor is public transportation and the fact that conforming to bus schedules can sometimes take hours out of one’s sleep schedule each day.