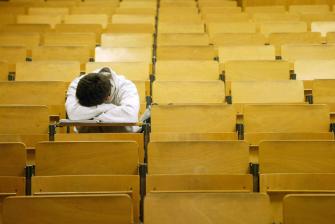 Louisiana’s state bird is the brown pelican. It should be the early bird. High school students in the Bayou State start school on average at 7:30 am. That is much earlier than anywhere else in the United States.

But it is doubtful those Louisiana students will catch the worm. Studies show that early school starts contribute to sleep debt in adolescents, which is detrimental to their health, both physical and mental.

That is why the American Academy of Pediatrics (AAP) recommended in 2014 that school for middle and high school students should start no earlier than 8:30 am. It is good advice that largely goes unheeded. The AAP found that fully 93 percent of American high school bells ring before that time. This map, compiled from data provided by the National Center for Education Statistics for the years 2017 and 2018, supports that finding.

In only three places — Washington DC, Alaska, and South Carolina — did a student’s day start at or after the recommended earliest time of 8:30 (on average, aggregating the starting times from the various school districts). Here is an overview, enough to make all but the most hardcore morning-persons shudder: 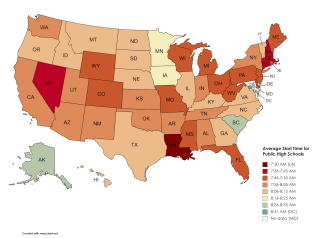 Only in Washington DC, Alaska, and South Carolina does the school day start at or after the recommended earliest time of 8:30 am.Credit: u/1ew via Data is Beautiful

Why do American high schools generally start so early? One large part of the answer: school buses. A lot of school districts re-use the same buses to pick up students from different schools: first the high schoolers, then the middle schoolers, and finally the elementary schoolers. In South Carolina, the order is generally reversed, which is why it is among the “latest” states on this map.

Early school starts are not the only cause of teenage drowsiness, but they are a crucial factor — especially because natural sleep cycles make it difficult for post-puberty teenagers to fall asleep before 11 pm.

A poll by the National Sleep Foundation found that 59 percent of 6th through 8th graders and 87 percent of high school students got less than the recommended amount of sleep (8.5 to 9.5 hours) on school nights. In the words of America’s leading soporific publication Sleep Review, the average American adolescent is “chronically sleep-deprived and pathologically sleepy”.

Chronic sleep loss in adolescents has been linked to a host of negative consequences:

Because of all those reasons, not just the AAP but also the CDC recommends later school start times and urges parents to advocate for them. Fortunately, this has met some success. In 2019, California Governor Gavin Newsom signed into law Bill 328, which requires middle schools to begin no earlier than 8:00 am and high schools no earlier than 8:30 am. It will go into effect in 2022.

If the measure proves successful, other states may consider similar moves. And there is some evidence that starting school later is beneficial. Around 400 school districts around the country have already moved their start time to 8:30 or later, often resulting in dramatically improved test scores, attendance rates, and graduation rates. (One Texas school district reported an 11 percent increase in its graduation rate.)

The map by u/1ewis found here on the Data is Beautiful subreddit.

Want to remember something? Maybe eat some chocolate

How the brain decides what to store and what to forget.