This is England. But not as we know it. Imagine an alternative past, in which the Warsaw Pact successfully invaded Great Britain.

A Polish occupying force is trying to make sense of this strange land, and the strange names of its cities and towns. How would a Polish soldier have asked a local for directions? Not by trying to read Southend-on-Sea off a map. That name trips off a Warsaw tongue much easier in Polish phonetic spelling: Saufend-on-Sji.

This map was produced by and for the army of communist Poland, in our past – the real one – for the aftermath of a military victory that never materialised.

If the time had ever come for the Polish Army to police this corner of England, a map like this would have been handy, rendering the names of the main towns and cities of the area in a phonetic spelling that makes Polish sense out of English topography. Some other examples: 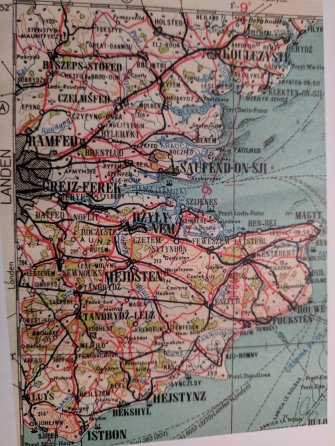 Britain’s island geography has protected it from the invasions that have plagued its European neighbours, stuck together on the European mainland like ferrets fighting in a sack. William the Conqueror was the last European warlord to successfully invade England, and that’s almost a thousand years ago (stick around for the millennial commemoration in 2066).

The Napoleonic wars led to an outbreak of invasion hysteria, as did Britain’s solo confrontation of Nazi Germany at the start of World War II. It is the latter trauma that retrospectively resonates in popular fiction, such as It Happened Here, a film from 1964; and the SS-GB a novel by Len Deighton from 1978, made into a tv series in 2017.

Invasion and occupation by the Soviets and their allies didn’t figure much in the public imagination – if the Cold War turned hot, the expected outcome was nuclear armageddon, not the hammer-and-sickle flag flying over Whitehall.

Nevertheless, it appears the Warsaw Pact planned for just such an outcome. Since the fall of communism, a plethora of military maps of western cities (both in Europe and the U.S.) have been released to the public. Virtually all these were in Russian, i.e. in cyrillic script. Yet it’s somehow weirder to see the stolid names of Home County cities and towns mutated into another tongue using the same latin script as English.

If the Occupation had taken hold, could Chatham over time have changed into Czetem? Margate into Magyt? Canterbury into Kentebery? Perhaps. But only if the occupiers would have gotten wind of the fact that those stubborn locals, when asked to show the way to Saufend-on-Sji, would routinely point to Czelmsfed (Chelmsford) instead.

Image found here on the Twitter feed of Alex White.

Related
Hard Science
Some earthquakes last for seconds, others for minutes — and a few for decades
What do you call it when the Earth shakes for three decades?
Sponsored
What childhood “money story” is shaping your financial behaviors?
Here are the signs that you inherited “money anxiety” from your parents.
The Present
The “maritime Indiana Jones” who salvages shipwrecks now wants to tow icebergs
Simple physics makes hauling vast ice chunks thousands of miles fiendishly difficult — but not impossible.
Neuropsych
Inside the brains of aging dogs
In a citizen science project, thousands of pet dogs are helping scientists to understand what happens to memory and cognition in old age.
Neuropsych
The most common source of awe might surprise you
It’s us.
Up Next
Surprising Science
The Jealousy Brain Circuit Has Been Discovered in Monkeys. Here’s What It Means for Us.
The results of this study could have implications for autism, addiction, and domestic violence.