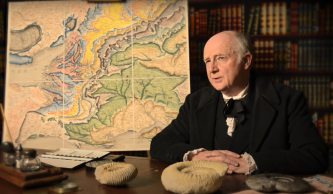 William ‘Strata’ Smith with some of his fossils and part of his map: still from a short video by the British Geological Survey. Credit: YouTube

Here’s one of the worst raps science gets: it has disenchanted the world. Literally dis-enchanted it, by replacing magic with measurement. And so, it has reduced the miracle of life to the banality of being.

There is plenty wrong with that assessment, but nowhere is it more untrue than in the field of geology. Earth scientists have given eloquent voices to the dumb mud and mute rocks beneath our feet. They’ve pieced together the deep history of the subterranean world – more ancient and more violent than anyone imagined. And they’ve produced weirdly beautiful maps like these.

Weird, because those colors and borders resist all identification with subdivisions we’re more familiar with, like political entities, climate zones or land-use types. No, geological maps strip away all those fads and deal only with the non-ephemeral: the origin and nature of the land itself. Arguably the most famous map in the history of geology is this one, published in 1815 by William Smith, showing the stratification of England, Wales and part of Scotland. For the first time ever, this map presented a detailed overview of the geology of an entire country.

It set the standard for all geology maps that have followed. And it turned geology into a ‘practical’ science – helping industrialists locate mineable coal seams, for example. Indeed, this was “The Map that Changed the World,” as described in a bestselling book of that title.

The book, by Simon Winchester, focuses on the mapmaker’s compelling life story. Nicknamed ‘Strata’ Smith, the lowly-born surveyor noticed how fossils occurred in predictable layers in the side of a freshly dug canal. He struck upon the idea of a stratified geological past and spent the first decade and a half of the 19th century surveying most of Britain to prove his theory.

Accompanying Smith’s map was a cross-section of the country, from Snowdon (left) to London, showing how the strata in southern England dip towards the southeast. This was effectively the first ‘block diagram’, now a standard feature of geographical cartography. Credit: Natural History Museum

Smith’s map is remarkably similar to current geological maps of Britain, proving the accuracy of his work. But he had some trouble convincing his contemporaries – which was due at least in part to class differences: London’s Geological Society was a gentleman’s club, not the natural milieu for a blacksmith’s son.

In his fight against social ostracism and professional plagiarism, Smith was forced to sell his fossil collection to the British Museum, lost his house and ended up in debtor’s prison. Free again but still homeless, he worked as an itinerant surveyor, until one of his employers recognised him for his work and appointed him Land Steward at an estate near Scarborough.

Smith later designed the Scarborough Rotunda, one of Britain’s oldest surviving purpose-built museums. Only in 1831 was he acknowledged by the Geological Society as the ‘Father of English Geology.’ His work was an inspiration for Charles Darwin. 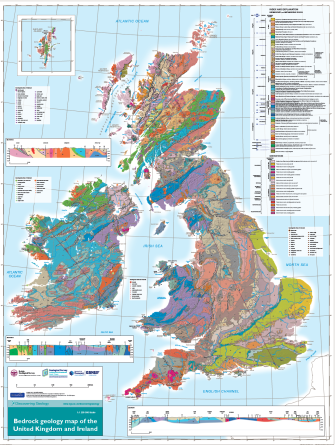 Bedrock Map of the UK and Ireland, showing science’s current understanding of the geology of the islands.Credit: Geological Survey Ireland

Smith’s is an impressive rags-to-fame story, and his accomplishments are now widely acknowledged, thanks in large part by the Simon Winchester book.

However, the brightly shining star of Smith’s celebrity somewhat obscures the work of one of his American colleagues. In 1809, six years before Smith published his map, William Maclure produced a geological map of the United States. Although inevitably dubbed the ‘Father of American Geology’, Maclure has not received the bucketloads of fame (granted, mostly posthumous fame) that Smith did. 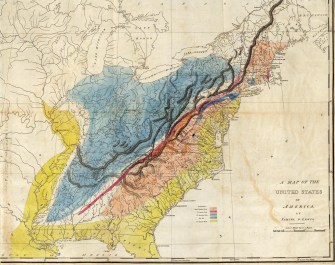 Geological map of the United States, by William Maclure (1809). Maclure used an existing map by Samuel G. Lewis as the base map for his color-coded observations. Image: David Rumsey Map Collection, CC BY-NC-SA 2.0

What a difference a star biographer makes. For Maclure’s life story sounds like page-turner material too. A successful Scottish merchant, Maclure was rich enough to retire at 34. Settling in Virginia but moving back and forth to Europe, he devoted the rest of his life to science and philanthropy – an example of the latter was his introduction to Philadelphia of educational courses based on the principles of the Swiss innovator Pestalozzi. He later also contributed to the establishment of a utopian community in New Harmony, Indiana.

Maclure had been bitten by the geology bug on a trip to France. In 1807, he personally started mapping the geology of the then United States, crossing and recrossing the Allegheny Mountains no less than 50 times. The monumental work took him two years to complete. Although he used a different system of classification than Smith, later surveys have confirmed the general accuracy of Maclure’s observations.

In 1817, he became the president of the newly founded Academy of Natural Sciences of Philadelphia, which he would remain almost until his death. Failing health forced him to abandon the attempt to set up an agricultural college in Indiana. He died in Mexico in 1840. In his will he provided for the establishment of 160 working men’s libraries. 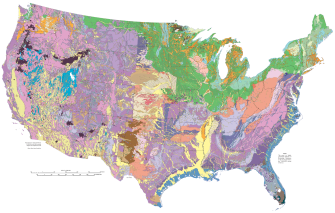 The US is much bigger than in Maclure’s day, and geology is much more advanced; yet the current map still builds on some of the observations he made in the early 19th century.
Image: USGS

Tags
geologymaps
In this article
geologymaps
Related
The Past
Here is the most terrifying pterosaur ever discovered
Meet your new flying nightmare: Thapunngaka shawi.
Strange Maps
Did dark magic conjure up the British Empire?
Esoteric evidence points to a ritual performed by Queen Elizabeth’s court magician John Dee.
Hard Science
Cracking a mystery about Vesta, our solar system’s second largest asteroid
How did the troughs form?
Strange Maps
Europe’s oldest map shows tiny Bronze Age kingdom
Discovered in 1900, the Saint-Bélec slab languished unrecognized in a castle basement for over a century.
Hard Science
Earth’s first puff of oxygen may be thanks to volcanoes
Scientists track down a puzzling early burst of oxygen on Earth.
Up Next
Neuropsych
Depression and suicidal ideation reduced after psychedelic usage
Another study confirms the positive effects of psychedelics on mental health.