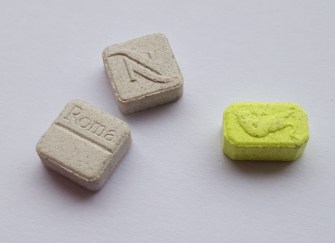 Some examples of MDMA, a.k.a. ecstasy, in pill form.

How to trace illicit drug use

Europe’s drug capitals? Antwerp for cocaine use, Stockholm for amphetamines. Prague tops the list for crystal meth, Amsterdam for ecstasy. So says a study by the EU’s official drug monitory body, analysing sewage samples from 68 cities in 23 European countries. The standardised surveys of urban wastewater, conducted since 2011, are a good indicator of regional preferences in illicit drug use, and their evolution over time.

It’s not easy to establish the size of Europe’s appetite for illicit drugs. Most users would prefer not to discuss their habit, and seizures of drugs shipments provide only a very partial picture. Fortunately for the scientists, urine doesn’t lie.

Since its original use in the 1990s to monitor the environmental impact of liquid household waste, wastewater analysis has rapidly improved, and is now able to provide near real-time data on the quantity, the geography and the evolution over time of illicit drug use.

The most recent study, published earlier this month by the European Monitoring Centre for Drugs and Drug Addiction (EMCDDA), took samples in March 2019 at treatment plants processing sewage for a total of 50 million Europeans, concentrated in the continent’s major urban centers.

The sewage was tested for traces of four illicit drugs: cocaine, MDMA (popularly known as ecstasy), amphetamines and methamphetamines (a.k.a. crystal meth). These leave clearly detectable biomarkers in sewage, unlike cannabis or heroin. 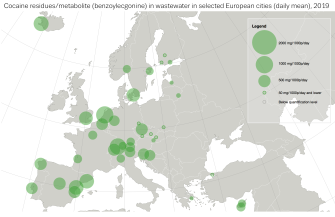 Cocaine: popular in west and south

The Belgian port city of Antwerp – and in particular the district of Antwerp-Zuid – topped the list of European cities with the highest average cocaine use, both on weekdays and at weekends.

The figures – expressing average mg/day of cocaine biomarker per 1,000 persons – show the Belgians out-consuming the runners-up in Amsterdam by a considerable margin. Also remarkable: four of Europe’s top 10 coke cities are Swiss; and London barely makes the list.

As recently as 2015, London was Europe’s cocaine capital, with a wastewater count of 909mg of benzoylecgonine (BE) per 1,000 people. BE is the compound produced by the body when it breaks down cocaine. Other research at that time showed 4% of Londoners between 15 and 34 years of age had taken cocaine in the preceding year.

But recent figures show the BE count in London’s sewage has been dropping for years now, from 895mg in 2016 to 619mg in 2019 – a reduction by nearly a third. Why is that? Wastewater research can’t tell you that. But the three most likely theories are:

The actual answer could be any combination of those three possibilities.

Seen across the whole of Europe, cocaine use is highest in western and southern European cities, particularly in Belgium, the Netherlands, the UK and Spain. Despite some increase, cocaine use remains low in eastern Europe. 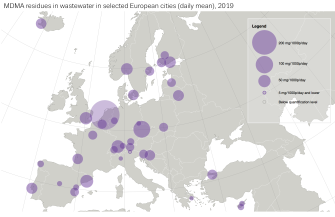 Ecstasy is now being used by a broader range of young people in mainstream nightlife settings.

Ecstasy: from ‘niche’ to mainstream

MDMA, commonly known as ecstasy, is most popular in Belgium, the Netherlands and Germany. Until recently, overall MDMA use seemed to be declining from a peak in the early to mid-2000s; however, more recent data provides a mixed picture, with MDMA consumption falling in London, for example, but remaining high in some cities. Sharp increases were noted in particular for Antwerp, Amsterdam and Eindhoven.

In fact, the study reports an increase in MDMA use for more than half of the 42 cities with comparable data for 2018 and 2019 – leading the researchers to conclude that ecstasy no longer is a ‘niche’ drug, linked to the sub-culture of dance clubs. It’s now being used by a broader range of young people in mainstream nightlife settings, like bars and house parties. 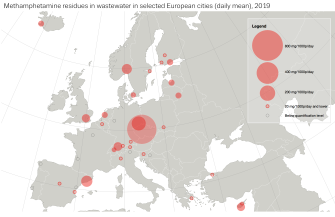 Meth: breaking out of its Czech heartland

For years, methamphetamine was popular particularly in the Czech Republic. In recent years, the drug has made inroads in surrounding countries – Slovakia and eastern Germany – but also further afield, in various Nordic cities, in Cyprus and Spain.

Overall 21 of the 41 cities with data on meth use for both 2018 and 2019 showed an increase. Despite this, meth use remained negligible outside the established hotspots.

In 2015, Oslo and Dresden topped the meth league tables, in 2016, Slovakia’s capital Bratislava took the crown. In 2019, Prague was Europe’s meth capital. 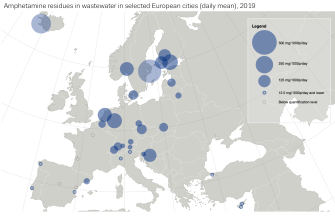 Germany, Belgium and Sweden occupy all but two spots in the amphetamine top 10.

Amphetamines: popular in the north

Antwerp was Europe’s amphetamine capital back in 2016, but the city has to content itself with its top spot in the cocaine ranking, having gone down a few places in this league table. Sweden rules the roost, occupying first and second place; with Belgium and Germany occupying three spots each.

No wonder then that the highest levels of amphetamine use were reported in northern European cities, with much lower levels in southern Europe.

Wastewater analysis has its limits when trying to establish quantities or patterns of illicit drug use, but it offers support to other indicators of drug consumption, for instance the amounts of drugs seized by the authorities, and it confirms the picture of a remarkably divergent market across Europe.

For more, go to EMCDDA‘s latest wastewater analysis cited here, which contains an interactive feature delving into the details of the survey.

Tags
addictionforensicsmapmedical researchpublic healthwater
In this article
addictionforensicsmapmedical researchpublic healthwater
Related
Health
Food expiration dates don’t have much science behind them
A food safety researcher explains another way to know what’s too old to eat.
The Present
Five key findings from the 2022 UN Population Prospects
Explore the key highlights from the UN’s latest release of its world population estimates.
Health
Sepsis still kills 1 in 5 people worldwide
Two ICU physicians offer a new approach to stopping it.
The Learning Curve
What is technology addiction? (And how you can better manage it)
To reap the benefits of digital technologies, we must contend with their addictive designs.
Neuropsych
The life-long psychological effects your first love has on you
If love is an addiction, your first love is the first dose.
Up Next
Life
This 103-year-old philosopher’s to-do list will get you through self-isolation
Need to isolate? No problem! This philosopher is keeping the world posted on his isolation routine by Facebook.