Edinburgh is the “grey metropolis in the North.” It has been for centuries, and thanks to Unesco, the capital of Scotland will keep its dour exterior for the foreseeable future. But couleur locale is all in the mind. This map, by Scottish artist Claire Murray, adds the joyful hues of personal experience to the city.

Everyone who’s ever visited the city will agree that Edinburgh is a spectacular city, or even, in the words of Benjamin Disraeli: “The most beautiful city in the world.” Well, almost everyone. Thomas Carlyle called it: “This accursed, stinking, reeky mass of stones and lime and dung.”

One of the city’s nicknames, Auld Reekie, derives from the peculiar attachment of the vapors emitted by Edinburgh’s forest of chimneys to the undulating surface of the city: “The houses stand so one above another that none of the smoke wastes itself upon the desert air before the inhabitants have derived all the advantages of its odour and its smuts. You might smoke bacon by hanging it out of the window,” suggested Robert Southey in 1819.

Two decades earlier, Sydney Smith had written: “No smells were ever equal to Scotch smells. It is the School of Physic; walk the streets and you would imagine that every medical man had been administering cathartics to every man, woman and child in town. Yet the place is uncommonly beautiful and I am in constant balance between admiration and trepidation.”

In today’s parlance: it’s a love-hate thing. Although most observers err on the side of the former. Daniel Defoe, in A Tour Through the Whole Island of Great Britain, finds Edinburgh’s Royal Mile “perhaps the largest, longest, and finest street for buildings and number of inhabitants not in Britain only, but in the World”. John Betjeman, in First and Last Loves, called it “the most beautiful of all the capitals of Europe”, while Peter Ustinov suggested that “Edinburgh seems like a Scandinavian capital. It’s very different from England and very refreshing.”

Perhaps this is because Edinburgh, ever since the Scottish Enlightenment in the 18th century, has presumed to Hellenic standards of importance, fancying itself an “Athens of the North.” Hence the abundance of classicist architecture, sprouting up in the century roughly from 1750 to 1850.

“Travellers have generally agreed that Edinburgh has a strong resemblance to Athens”, wrote James Bone in The Perambulator in Edinburgh (1926), “and the inhabitants have apparently been willing to humour them by planting happy adaptations and variations of Athenian buildings on prominent places.” 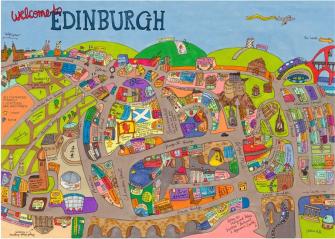 H.R. Hitchcock called Edinburgh “the most extensive example of a Romantic Classical city in the world”, and that charm certainly did not miss its mark with Charlotte Brontë. In a letter dated 1850, she wrote: “My dear Sir, do not think that I blaspheme when I tell you that your great London, as compared to Dun-Edin, ‘mine own romantic town’, is as prose compared to poetry, or as a great rumbling, rambling, heavy Epic compared to a Lyric, brief, bright, clear, and vital as a flash of lightning.”

Rather more chilling praise came from Joseph Goebbels, Hitler’s propaganda minister, who in 1938 thought that Edinburgh “will make a delightful summer capital when we invade Britain.”

Both its lovers and haters agree on one thing, though: Edinburgh’s dominant color. “It is a fine place,” Karel Capek admitted in his Letters from England (sic): “Stonily grey and strange of aspect”. Less charitably, Alfred Noyes thought is a “[c]ity of mist and rain and blown grey places.”

“Scotland’s history is in her every grey stone,” said E. Sillar, while Tennyson called Edinburgh “[the] grey metropolis of the North.”

Going around the city, grey is indeed the ubiquitous, inescapable color, lending Edinburgh, when daylight and bright weather are in short supply, a gloomy atmosphere, or to use the appropriately Scots term, a certain dourness. 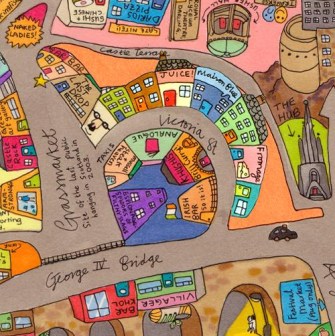 Edinburgh is built on ancient rock – the Early Carboniferous volcano of Arthur’s Seat sits under the city. Edinburgh Castle is built on top of Castle Rock, a hard, volcanic basalt plug. Edinburgh is also built of ancient rock. Within the Castle walls is St. Margaret’s Chapel, the oldest surviving building in town. The grey aspect of this 12th-century stone pile set the standard for centuries of buildings, especially after 1425, when the Scottish Parliament mandated that all new houses be built in stone to reduce the risk of city-wide fires.

Stones for new buildings were sometimes quarried within the city itself, with the result varying from pink coarse-grained Devonian sandstones to Carboniferous blonde sandstones. In the 18th century, when Edinburgh burst out of its medieval core, the New Town was filled with houses built from locally mined sandstone. That local stone remained the most prominent building material all through the 19th century, when Edinburgh more than doubled in size. Building Edinburgh in the same stone on which it stood gave the city a very ‘organic’ look. Robert Louis Stevenson called it “a dream in masonry and living rock.”

The preference for sandstone declined after the First World War. Even so, stone-clad surfaces or, from the 1960s onwards, office blocks with concrete facades, kept Edinburgh’s aspect largely intact, so much so that in 1995, the city’s Old and New Towns were added to Unesco’s list of World Heritage sites, in recognition of their outstanding architectural, historical and cultural importance. Meaning that Edinburgh’s stony greyness is now “set in stone.”

Fortunately, there are other ways to look at Edinburgh. Like Claire Murray’s colorful map of Edinburgh. The splashes of Technicolor feel like an intentional antidote to the city’s grey reputation, and perhaps also a reflection of the fact that a city is more than its buildings.

The map zooms in on the center of town, and although perhaps not as practical, precise and panoptical as your standard tourist map, it looks like a delightful companion on a dérive through the Scottish capital. The Royal Mile, Grassmarket and other well-known Edinburgh locales are indicated, but also stuff you won’t see on Google Maps, like where you can get the bestest cheapest curry in town, or the location of the stairs o’ death.

This highly personal piece of psychogeography [1] is reminiscent of some earlier maps featured on this blog, notably Russell Richards’s Inaccurate Map of Charlottesville (#36), Elmer Simms Campbell’s Night-club Map of Harlem (#476) and even This Isn’t F***ing Dalston! (#551), Euan Mills’s attempt to pinpoint the ephemeral London neighborhood.

Map reproduced with kind permission of Claire Murray. Unfortunately, the map is no longer available on her website.

[1] The visualisation of psychological currents in relation to various social anchorages. Or: The practice of exploring the urban environment while being led by curiosity and a paused sense of time and place. But basically: Just about anything that takes pedestrians off their predictable paths and jolts them into a new awareness of the urban landscape.

What If Food Labels Spelled Out Calories in Practical Terms?

Some health advocates believe the public would eat healthier if they were informed just how much they’d have to exercise to work off a bowl of sugary cereal or a liter of cola.