The Dutch still call it their Golden Age: in the 17th century, they built a trading empire that spanned the globe and propelled them to the pinnacle of power and influence in Europe. World cities as far apart as New York, Cape Town and Jakarta are all built on Dutch foundations.

But the Dutch Golden Age wasn’t all that Dutch. As these maps show, the crews manning the ships of the VOC, the Dutch East India Company, came from all over Europe, and indeed from all over the world.

The maps were prepared by Jelle van Lottum, Senior Researcher at the Huygens Institute for the History of the Netherlands in Amsterdam. Specialising in maritime and migration history, Mr. van Lottum traced the places of origin of the soldiers, sailors, and officers crewing VOC ships on a map.

The records span the Company’s entire history, from the early 1600s to the late 1700s. “The VOC relied on a highly international labour force, the composition of which changed strongly over time”, Mr van Lottum says. 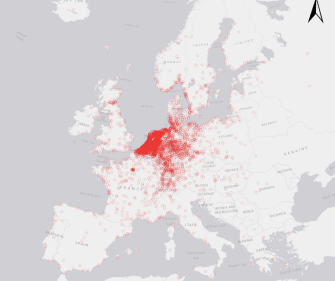 This map shows all traceable places of origin of VOC crews throughout the centuries. Obviously, the Netherlands themselves figure strongly; but almost every other present-day country in Europe contributed manpower to the Dutch maritime effort: from Iceland to Turkey, and from Portugal to Finland. 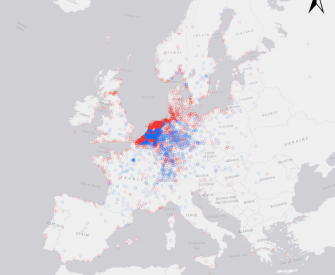 As the years went on, crews came from further inland, throughout the 18th century especially from the West German states.

On this map, places of origin 20 km or less from a major river are marked in blue. It shows how important inland waterways were as a means of transportation, and as conduits for information and migration.

On its ships, which travelled between Europe and Asia, the VOC carried mainly European crews. But there were also men born in Asia and the Americas on board, as the following maps show. 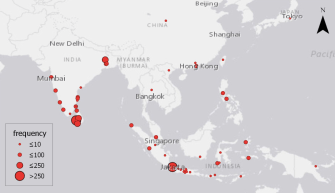 In Asia, present-day Sri Lanka, Indonesia and India were major sources of VOC personnel, but the Dutch East India ships were also crewed by Japanese, Taiwanese, Thai, Chinese and Vietnamese soldiers and sailors. 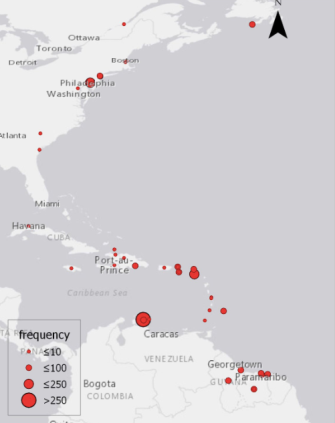 From the Americas, Dutch possessions (in the Caribbean and on the South American mainland) served as major sources for VOC crews, but VOC ships also featured Haitians, Jamaicans – and not a few Philadelphians.

Even from the start, VOC crews were very international. The graph below shows a big dip from 1680 to 1720 – the only period when foreign-born VOC soldiers made up less than half of the total. 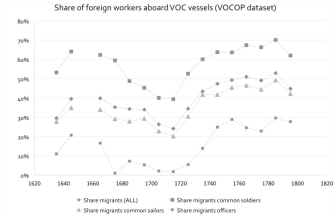 The high point came near the end, around 1790, when no less than 70% of the common soldiery on board VOC ships came from outside the Netherlands, as well as close to half of all common sailors, and even nearly 30% of the ships’ officers.

Mr van Lottum’s research provides a useful reminder that labor migration in previous centuries was as common – and as economically important – as it is today.

Even if we traveled at the speed of light, we'd never catch up to these galaxies.
Up Next
Technology & Innovation

The mission to remove 1.8 trillion pieces of plastic from the ocean is about to launch

Swirling in the Pacific Ocean is a loose patch of garbage that measures 1 million square miles—about three times the size of France. Now, one organization is beginning to clean it up.