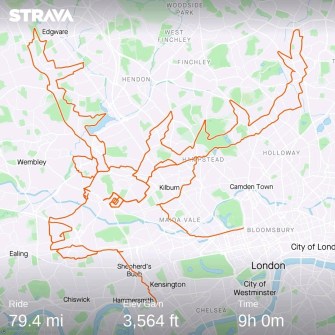 That time of the year

On 9 December, Anthony Hoyte tweeted: “It’s that time of the year again when I cycle round congested streets in the rain looking for some festive cheer!”

The accompanying picture shows the result: a giant reindeer drawn across the map of London. Mr Hoyte (51) from Cheltenham, an avid cyclist, spices up his hobby by making what he calls ‘Strava art’.

The fitness app tracks the routes of the joggers and cyclists who use it. With a bit of advance planning, Mr Hoyte uses that function to create city-sized drawings. He’s done about a dozen, including a flock of birds in Bristol, a Yorkshire terrier in Leeds and two elephants in Birmingham. 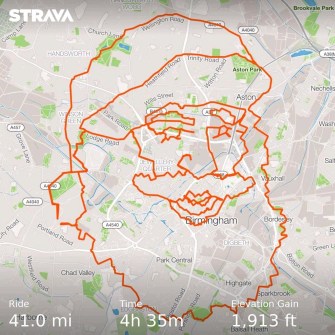 Two years ago, he produced his first Christmas-themed image – a snowman, also in London. In 2018, he followed up with a picture of Santa Claus splashed over the map of Birmingham. Mr Hoyte thinks this year’s effort is his best yet.

Starting in Hammersmith, he cycled north to Ealing (first antler), then south again and east (second antler), before returning to central London via Hampstead and Maida Vale, ending near Bloomsbury.

Cycling in London is not for the faint-hearted. “Particularly around Neasden and Wembley, it’s not the most pleasant cycling.” But art – including Strava art – requires sacrifices. 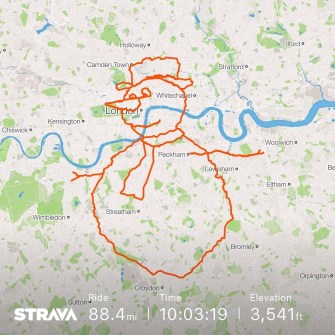 The ride was just under 80 miles (129 km) long and took nine hours to complete. Everything went as planned, except for a short interruption in the GPS signal near Shepherd’s Bush (notice the notch in the reindeer’s neck). How does he find his routes? He spends a lot of time looking at maps, waiting for things to “jump out” at him: “It’s like looking at patterns in clouds and seeing pictures.”

It’s a phenomenon also known as pareidolia – seeing meaningful patterns where there aren’t any. The classic example is seeing the face of Jesus in burnt toast. There are two map-related variants. One is called cartocacoethes: seeing maps where there aren’t any. See here for more. The other is cartozoology, and it describes Mr Hoyte’s hobby: the discovery and study of animals outlined paradigmatically by street layouts as they appear on maps. More on that here.

For more of Anthony Hoyte’s Strava art, check out his Twitter.

One of the best-known allegorical depictions of love has a rather pessimistic male twin.
Up Next
Starts With A Bang