How to lie with statistics

This video, posted on Twitter on 22 February, shows how the coronavirus (COVID-19) epidemic compares to that of other recent outbreaks. Terrifyingly, the line for the coronavirus skyrockets, leaving those for SARS, MERS, ebola and swine flu far behind.

Alarming? Yes. But not the whole story. As Mark Twain once said: There are three kinds of untruths: “Lies, damned lies and statistics.” If he were around today, he might add a fourth: video edits. The 30-second clip is part of a 10-minute video with exactly the opposite message: Do not panic!

When the video was posted, the coronavirus was less than two months old, and had already travelled from its ground zero—a so-called ‘wet market’ in the Chinese city of Wuhan—across several continents, infecting more than 40,000 people. It had just killed its 1,000th victim.

The no-panicking message still holds, even half a month and more than double the number of cases later. As of 1 March, we’ve passed 86,900 people infected, with just under 3,000 deaths reported. Why? Because context is everything. 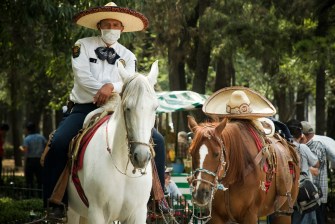 Mexican police officer wearing a face mask during the swine flu outbreak of 2009.

First, the standalone clip, which has been seen more than two million times. It compares the speed of the coronavirus outbreak to that of a few other recent ones:

For the sake of comparison, the graphs for each epidemic are aligned so they all start together on Day One of each outbreak. 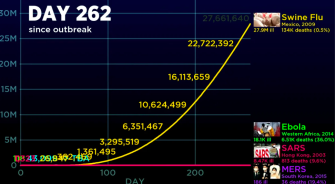 About here, the clip cuts out. The editing aims to focus the attention on the exponential rise in coronavirus cases. But as the longer version goes on, the story changes.

Swine flu was caused by the H1N1 virus, which also caused the Spanish flu. That outbreak, in 1918/19, infected about 500 million people, or 1 in 3 people alive at that time. It killed at least 50 million people. It was the combination of extreme infectiousness and high fatality that made the Spanish flu such a global, lethal pandemic.

None of the other infectious diseases comes close to that combination. The swine flu, although more infectious than other diseases, was less infectious than the Spanish flu, and also less deadly (0.5%). Unlike COVID-19 or its fellow coronaviruses SARS and MERS, Ebola is not spread via airborne particles, but via contact with infected blood. That makes it hard to spread. Ironically, it may also be too lethal (39.6%) to spread very far. And COVID-19 itself, while relatively lethal (2.4%), is well below the deadliness of the Spanish flu, and does not seem to spread with the same ease. 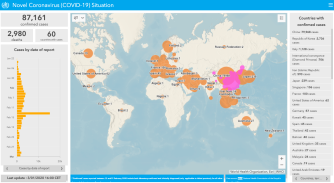 WHO dashboard on the spread of COVID-19.

Providing further context to the relatively small danger that the coronavirus poses to your personal health, the video ends by comparing the virus’s most deadly day so far (108 people killed on 10 February) to the average causes of death worldwide for that day.

On average 151,600 people die every day. On 10 February, the coronavirus killed a lot less than people were killed by

In short: yes, the coronavirus is spreading faster than other epidemics did in their first two months, but it does not seem to be spreading with the speed of the swine flu, let alone the Spanish flu; and it is much less lethal than the latter (if more so than the former). The video concludes that the best strategy for your health is to:

Video produced by Abacaba and foundhereon YouTube. See also Snopes.com for more on the veracity of the shorter clip.

Tags
coronavirusdisease outbreaksebolaepidemiologymappandemicpublic health
In this article
coronavirusdisease outbreaksebolaepidemiologymappandemicpublic health
Related
Health
Food expiration dates don’t have much science behind them
A food safety researcher explains another way to know what’s too old to eat.
The Present
Five key findings from the 2022 UN Population Prospects
Explore the key highlights from the UN’s latest release of its world population estimates.
Health
Sepsis still kills 1 in 5 people worldwide
Two ICU physicians offer a new approach to stopping it.
The Learning Curve
What is technology addiction? (And how you can better manage it)
To reap the benefits of digital technologies, we must contend with their addictive designs.
Surprising Science
What happens when two different respiratory viruses infect the same cell?
A new study looks at what happens when you get infected with two viruses at the same time.
Up Next
The Present
5 in-demand tech skills, and how you can start learning them today
Break into the lucrative world of tech with training you can do anywhere.