No prizes for guessing that English is the world’s lingua franca. But how good are the world’s other languages at spreading information? As these maps show, size isn’t the only thing that matters.

Spanish, for example, is more influential than Mandarin. Although it has less than half the number of speakers, it is better at ‘co-expression’ with other languages, via translations and multilingual speakers. That degree of interconnectedness is more telling of a language’s global importance than the number or the GDP of its speakers, both of which are often very limited geographically.

The structure of those co-expressions is captured by three maps, each describing a different global language network (GLN). The maps illustrate a recently published paper [1] on the role of multilingualism in the worldwide transmission of information and ideas. Multilingual people are the Chinese whisperers of knowledge: they pass on memes from their native language to other ones they’re fluent in (and back again).

The first map shows the links in a GLN based on 2.2 million book translations in more than 1,000 languages [2]. If a book is translated from, say, French to English and Russian, the map will show lines linking the French dot to the English and Russian ones. The more translations between a language-pair, the thicker the line connecting the dots. 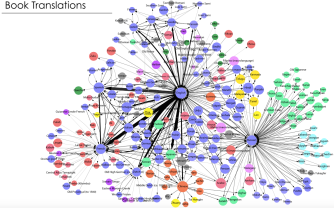 The second map is based on 550 million tweets, fired off by 17 million users in a total of 73 different languages. If a user tweeted in two (or more) languates, the relevant dots will be connected.

The third map shows the connections between languages in Wikipedia, based on 382 million edits in 238 languages by 2.5 million unique editors. If a user edited articles in more than one language, the lines on the map will reflect that link between them.

On all three maps, English is the central hub of the network, not so much because of its size [3] as due to the number of transmissions to and from other languages – more than any others, including the bigger ones. The same phenomenon occurs on the intermediate level: there may be languages more widely spoken than German, French or Russian, but no nodes in that size category are busier transmitting information to others than they are.

This “halo of intermediate hubs” is in stark contrast to some of the larger languages that are nonetheless more isolated, notably Hindi, Arabic and Mandarin. The difference between both is the degree to which the speakers of languages in either category are themselves ‘connected’,  by a combination of multilingualism and participation in global online communication.

In their paper, the researchers point out an interesting rule of thumb: if the number of famous people born into a certain language is high, it will be relatively better connected than others. Or, put another way: “[I]t will be easier for an English speaker than for a Nepali speaker to become globally famous”. 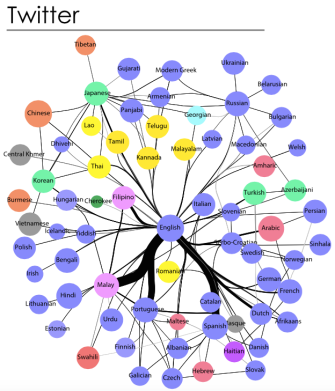 An interesting revelation is the way interconnectedness between consecutive languages can facilitate a chain of knowledge transfer. In its review [4] of the paper, Science cites the example of Malay as the intermediate facilitator for contact between the Korean and Filipino languages. In most cases, though, it will be English that fulfils the role of mediator between languages that don’t communicate directly.

The relative importance of languages (rather than their absolute size) determines more than just transmission of objective facts; it also reflects how more subjective and intangible assets like influence, bias and rumour spread – for example the reporting on conflicts in the Ukraine, in Syria, etc.

Policy makers can draw two main lessons from the role of language in knowledge dissemination, says Shahar Ronen, co-author of the paper: “If you want your language to be more prominent, invest in translating more documents, encourage more people to tweet in the national language. If you want your ideas to spread, pick a second language that’s very well connected”.

For English speakers, the research suggests that a smaller but better-connected language like Spanish is more advantageous than Chinese – bigger, but more isolated. At least as far as spreading ideas through book translation, Twitter and Wikipedia is concerned. The most obvious choice for everybody else is… English.

And yet, the internet is becoming less anglophone. By some estimates, the amount of online content written in English has fallen from about 80% in 1996 to less than 40% in 2013 [5]. 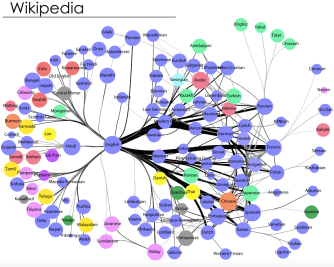 As the authors of the paper on GLNs conclude: “Future assessments of GLNs can identify whether English is gaining or losing influence with respect to the languages of rising powers such as India or China. Such changes may help predict a language’s likelihood of global importance, marginalization, and, perhaps in the long term, extinction”.

Many thanks to François Arnould for sending in the link to the article in Science. Images reproduced with kind permission of the authors. For more information, see their Global Language Network website.

[2] Compiled by the Index Translationum project at UNESCO.

Cold War meets Star Wars in this cut-away of a 1950 “rubber bubble,” the first line of defense against nuclear sneak attack.
Neuropsych

Drugs that stifle acute inflammation may prevent the body from healing properly.
Neuropsych

Are psychopaths cold-blooded murderers? Not usually.
The Future

Augmented reality will give us superpowers

AR promises us a magical world.
Up Next
Culture & Religion

The Importance of Infrastructure Investment, with Larry Summers

Economist Larry Summers explains that there’s no better time than now for the U.S. to reinvest in its crumbling infrastructure.