These sober maps have a chilling topic: the prevalence of lynchings throughout the U.S. from 1930 to 1938. They were published by the Association of Southern Women for the Prevention of Lynching (ASWPL), an organization that sought to eradicate the practice by changing attitudes rather than laws.

Between 1882 and 1964, 4,745 people were lynched in the United States (1). Most of the lynchings took place in the Deep South. Most of the mobs were white, most of the victims (72.7%) were black (2). As terrifying a practice as ‘death by mob’ in itself must have been—often involving prolonged torture—it thus also served to affirm the racial hierarchy of white power and black powerlessness.

A curious silence surrounded the practice of lynching. Often attended by large crowds, and even commemorated by postcards, these extrajudicial killings had a terrorizing effect on black populations. Yet they rarely provoked the outraged attention of the wider public or action by the authorities.

In the 1890s, the ground-breaking work of investigative journalist Ida B. Wells—born a slave in 1862—was instrumental in exposing the mechanism behind the systematic lynching of black men. (She’s one of the women in The NY Times’ series on Overlooked Obituaries).

Lynchings peaked in the late 19th century but continued well into the 20th century. The ASWPL was founded in 1930 to combat a renewed rise in lynchings of blacks (3) across the South (4).

The ASWPL sought to counter the frequent excuse that the extralegal executions were carried out to ‘protect white women’, pointing out—as Wells had done—that the alleged rapes seldom occurred, and that the true rationale for the lynchings was racial hatred. As an ironic (or infuriating) sign of the times, the ASWPL fought racism along segregated lines. The organization only accepted white women as members, believing that “only white women could influence other white women.” 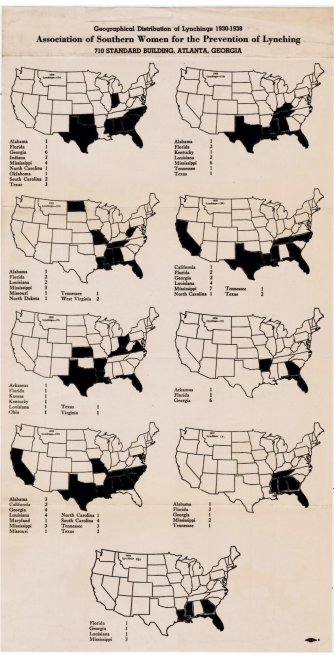 The ASWPL established groups in all southern states, which by the early 1940s had a combined membership of 4 million. In May 1940, the organization was able to mark ’12 months without a lynching’. In 1942, judging is purpose achieved, the ASWPL disbanded.

Lynchings did continue, however sporadically. The last recorded one occurred in 1981 in Mobile, Alabama. Michael Donald, a young black man, was beaten to death by KKK members. One of the perpetrators was sentenced to death and executed in 1997, the first execution for a white-on-black crime in Alabama since 1913 (5).

(1) According to data collected by the Tuskegee Institute (now Tuskegee University)
(2) Between 1882 and 1903, 125 lynchings of blacks by blacks were recorded, and 4 lynchings of whites by blacks.
(3) Blacks were the victims of 20 of the 21 lynchings reported for 1930.
(4) From the 1890s to the 1940s, more than 90% of the lynchings in the U.S. occurred in the South.
(5) Michael Donald’s mother sued the United Klans of America for damages and was rewarded $7 million dollars, bankrupting the UKA and setting a precedent for civil action against hate groups.

Related
Thinking
Finding your essential self: the ancient philosophy of Zhuangzi explained
Adopting a healthy scepticism towards inherited ideas means “emptying the container of the Self.”
The Future
Startup’s bladeless flying car is designed to reach Mach 0.8
One of Jetoptera’s VTOLs is expected to reach speeds of around 614 mph, about as fast as a commercial jet airliner.
Health
New blood types are often discovered following medical disasters
New blood types are regularly discovered by an unusual absence or an unusual presence — both of which can result in tragedy.
The neuroscience of loving music
Humans are musical animals four million years in the making, explained by music expert Michael Spitzer.
▸
8 min
—
with
Michael Spitzer
Life
Scientists use CRISPR to insert an alligator gene into a catfish
Disease kills off 40% of farmed catfish. This gene protects them.
Up Next
Starts With A Bang
This Is What It Looks Like When Solar Systems Form
After generations of speculations, we’ve finally got the images that tell us the full story.Some 4.5 billion years ago, our Sun and Solar System were born from a collapsing cloud of […]