New York is famous for the grid pattern of its city blocks. Lego is famous for the interlocking bricks that are the foundation stones of its worldwide toy empire. The two were destined to meet, as they do in the art of J.R. Schmidt.

In 2012, the 3D artist and motion designer computer-generated this psychedelic interpretation of Manhattan and surrounding boroughs, using Lego-like bricks to give his map the look and feel of a “real” scale model. It helps that Lego, probably Denmark’s most successful single export product, is the real-world equivalent of the pixels that make up a computer graphic. 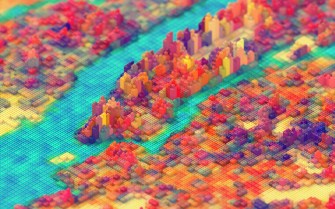 Schmidt based his work on various maps and satellite images depicting the elevation level in NYC. He translated that data into the height, color, and opacity of his bricks — which therefore don’t correspond with individual buildings, but represent an abstract, statistical average of the city’s topography.

Many thanks to J.R. Schmidt for allowing me to use his work. Grab a wallpaper version of the image here on Dribble. For more exclusive delectation, buy a print here on Curioos.

Related
Thinking
Finding your essential self: the ancient philosophy of Zhuangzi explained
Adopting a healthy scepticism towards inherited ideas means “emptying the container of the Self.”
The Future
Startup’s bladeless flying car is designed to reach Mach 0.8
One of Jetoptera’s VTOLs is expected to reach speeds of around 614 mph, about as fast as a commercial jet airliner.
Health
New blood types are often discovered following medical disasters
New blood types are regularly discovered by an unusual absence or an unusual presence — both of which can result in tragedy.
The neuroscience of loving music
Humans are musical animals four million years in the making, explained by music expert Michael Spitzer.
▸
8 min
—
with
Michael Spitzer
Life
Scientists use CRISPR to insert an alligator gene into a catfish
Disease kills off 40% of farmed catfish. This gene protects them.
Up Next
Politics & Current Affairs
In Defence of Dismaland: The Value of Banksy’s Dystopian Nightmare
Why Banksy’s dystopian vision of the future might be the kind of shock we need to realize the problems humanity faces.