Here’s a question that can turn any pub quiz into a pub brawl: Which is the world’s largest island? In the left corner, those who favour Greenland. In the right, the pro-Australians. Fighting it out is as good a way to settle the dispute as any, because there is no correct answer.

That makes Australia almost exactly as big as the contiguous U.S. (1), and Greenland a bit smaller than Algeria, Africa’s largest country. If you thought Greenland was almost exactly as big as Africa, you fell for the Mercator projection, which helps sailors get from port A to port B in a straight line on the map (2), but only at the cost of increasing the distortion of the land masses towards the poles. In actual fact, Africa is 14 times the size of Greenland. Like so: 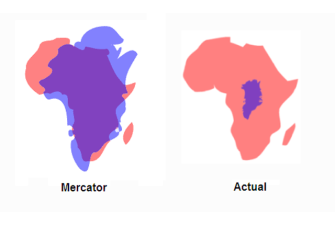 But back to the geographical fisticuffs.

Quite arbitrary indeed, and easily brushed aside by Australia’s teachers, who can’t resist imparting to their students the beautiful symmetry of a questionable fact: that their country is the world’s smallest continent, as well as its largest island.

To the rest of the world, that’s a clear case of wanting to have your cake and eat it too. So Greenland gets the green light: most observers agree that it is the world’s biggest island.

Now that that is settled, do you know which is the world’s second-biggest island? If your a geo-nerd, you may know that it’s New Guinea, the island split between Indonesia and the independent state of Papua New Guinea (4). Extra points if you know that numbers three and four are Borneo and Madagascar.

But that is about where our own heady mix of knowledge, luck and intuition would run out. For future reference (and highly specialised pub quizzes), memorise this roster of the world’s 26 biggest islands. Peek all you want, but look away after a minute or so. Now, how many can you name?

They sure are a collection of strange bedfellows. Number five is Baffin Island, in Canada’s Arctic, frozen and desolate (population: 11,000). Number six is Sumatra, another pearl in the string of tropical islands that is Indonesia (population: 50 million). Filling out the second row are Japan’s main island Honshu (pop: 103 million) and another one of Canada’s northern islands, Victoria (pop: 2,000).

Great Britain, at #9, is the  first European entry. With 61 million inhabitants, it is the third most populated island in the world (Honshu is the second). At #10, Ellesmere Island is Canada’s northernmost and most desolate island (population: about 100 shivering souls). It bears a strange resemblance to Westeros, the main continent in the Game of Thrones universe. Sulawesi, at #11, is another Indonesian island, and also has a shape reminiscent of elsewhere (see #675). New Zealand’s South Island (#12) shares the prize for most generic name with its North Island (#14). Combined, they are home to 4.5 million kiwis (5). That is less than 1/30th of the population of Java, the island separating them in the size ranking. With 145 million inhabitants, Java is the world’s most populous island (density: over 1,100 people per km2), representing almost 60% of Indonesia’s total.

Not Indonesian but from around there, Luzon (#15) is the main island of the Philippines. Newfoundland (#16) is one of five Canadian islands on this map, but could have been an independent nation of its own, had that 1948 referendum gone the other way (see also #31). Cuba (#17) and Iceland (#18) are two of the four islands on this map that are also independent nations (6). Mindanao (#19) is the other large Filipino island on the map. Its neighbour Ireland (#20) is used to having Great Britain next door, but probably won’t mind the change.

Hokkaido (#21) and Sakhalin (#23) are also geographical neighbours, separated by a size sibling, Hispaniola (#22). Banks Island (#24) is probably the least familiar name of the bunch. Frozen and treeless, this Canadian island is home to no more than 112 people – all in the ‘capital’, Sachs Harbour – and two-thirds of the world’s population of lesser snow geese. Bringing up the rear are Sri Lanka (#25) and Tasmania (#26).

Nice about this map is not just that it’s a handy cheat sheet for that island/continent-themed pub quiz that will probably never happen, but also that the islands are brought together in the same scale (eat that, Mercator!). So it’s obvious at a glance how much bigger Madagascar is than Britain, for example. Or that Hispaniola and Hokkaido are virtually the same size (world maps tend to stretch the latter, making it appear much bigger). 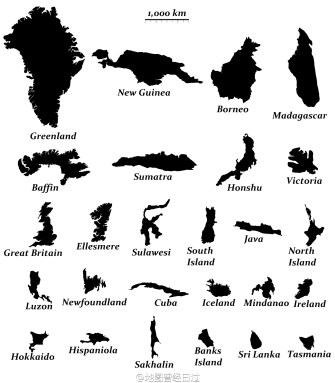 (3) the vagueness of that definition explains the different counts. The minimalist option is three continents (America, Afro-Eurasia, Australia). The four-continent model adds Antarctica. The five-model one counts Africa and Eurasia separately. There are two six-continent models: one separating Europe and Asia, the other splitting North from South America. Subtracting Antarctica from either leads to an alternative five-continent model. The seven-continent model includes all aforementioned parts separately.

(4) One of only four islands on this map divided between two (or more) sovereign states. The others are Borneo (Malaysia, Brunei, Indonesia), Ireland (the republic of Ireland and the UK), Hispaniola (Haiti and the Dominican Republic).

(5) Common nickname for the inhabitants of New Zealand. Not to be confused with the fruit or the various bird species of the same name. For more info, go to Kiwipedia.

(6) The other two are Madagascar and Sri Lanka.

Sooner or later, Earth is going to be hit by a large enough space object to cause significant damage to humanity. Stopping them isn’t easy.
Up Next
Technology & Innovation

WhatsApp has joined Telegram, TextSecure, and many other secure messaging apps, enabling end-to-end encryption when sending texts and multimedia messages. An encrypted messenger has become the one of the most popular ways to communicate.