This map is slightly disconcerting. Cartophilia is a form of voyeurism; a benign form, I’d like to think — but all the same, it would be nice if the map didn’t stare back at its reader (1). And yet here we have a map of Europe reflecting our impertinent glances more than two dozen times over.

What makes these 29 pairs of eyes even more unsettling is the fact that these are not real people. Each face is a composite, assembled from the mugshots of between 10 to 24 male athletes from each of the 29 European countries represented here. This gallery of facial averages is like a collection of artist’s sketches of usual suspects pinned to the bulletin board of a police station.

Who are these imaginary men? What are their faces trying to tell us? As averages of random but comparable samples by country, these faces are uniquely “national.” The French face is the Frenchest face possible, and the German face couldn’t be any more German, et cetera. Does that mean these faces are merely average? Or are they in some way “ideal”? Or — and this is even more disconcerting — could it perhaps be that to be facially average is ideal?

This map was produced by Dienekes Pontikos, who runs an anthropological blog dedicated to human population genetics, physical anthropology, archaeology, and history. Genetics is fascinating but complex, and general knowledge of the field is superficial and anecdotal — hands up anyone who knows what the acronym DNA stands for (2). Hence this mugshot map of Europe, a clever and simple way to demonstrate the principle of genetic variation. 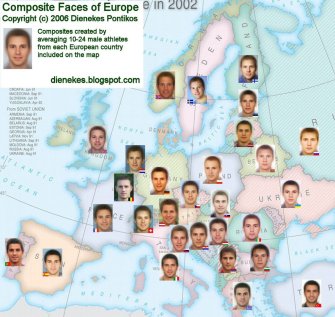 Unfortunately, Mr. Pontikos does not reveal exactly how he went about assembling the portraits for this map. It would be interesting to know why these nearly 30 men, despite each being put together from apparently different national databases, look so eerily alike.

It casts the mind back to The Seven Daughters of Eve, the book in which genetics professor Bryan Sykes posits the theory that almost all native Europeans are descended from no more than seven prehistorical women. Are these their “Twenty-Nine Average Descendants”?

Beyond the obvious resemblance, there are equally noticeable differences. Although none of these guys is as blonde as suggested by the Blonde Map of Europe (#214), the northern fellows are generally lighter-skinned and -haired than their southern cousins. But not by all that much.

And yet… looking at each of their faces, it’s hard to escape the subconscious conclusion: But of course, look at those eyebrows, that nose: That’s what a typical (insert nationality here) looks like.

That’s how insidiously our brain confuses “average” with “ideal.” Perhaps it’s just as well that this map stares back at us, giving us pause to consider the automatism of our facial feature-based prejudices. Because when it comes to looks, nobody is average.

Not all of Europe’s countries are represented on the map, by the way. There’s no average Andorran, no median Monégasque. The Vatican, Liechtenstein, San Marino, and Malta apparently also don’t field enough male athletes to produce a composite mugshot (3). But it’s not just the mini-states that are missing. Some medium-sized nations also lack representation: Ireland, Denmark, Moldova, Albania and Macedonia. Also missing are Kosovo and Montenegro, not yet independent at the time this map was produced, in early 2006.

Mr. Pontikos offered to complement the map: “If your country is not listed here, and you know of a good source of facial athlete pictures, e.g., the website of soccer team(s), drop me a line.” But of course, that was nine years ago. It would be interesting to update the map in its entirety, though: The faces staring back at us would probably be less white than back then.

(2) Deoxyribonucleic acid. But what does that mean? And so on.

Gravitation, all on its own, can reveal what's present in the cosmos like nothing else.
Up Next
Technology & Innovation