Making the most of a test flight over Germany and Denmark earlier this week, an Airbus A380 drew a giant Christmas tree on the map – ornaments included.

The five and a half hour flight started and ended at Hamburg Finkenwerder airport. The A380 flew in a straight line towards the southwest, making a loop just south of Bremen.

The base of the tree is a line running from Karlsruhe to the east. After zig-zagging past Brunswick and Wolfsburg, the plane set course back for Hamburg, only to continue north towards Denmark.

Its long straight trajectory ended over Aalborg, where the plane made a few more loops to finish off the tree-topper, after which the plane returned to Hamburg.

The giant Christmas tree over Germany and Denmark was not the result of a rogue pilot’s actions (like the giant penis that recently appeared over the U.S.), but was an intentional season’s greeting by Airbus to planespotters everywhere.

“This was a standard test flight for internal purposes at Airbus, prior to our delivery of a new aircraft to one of our customers. Its curious pattern was made possible thanks to the friendly and cooperative spirit of Deutsche Flugsicherung (the company in charge of air traffic control for Germany) and Eurocontrol (the international organisation monitoring air traffic management across Europe)”. 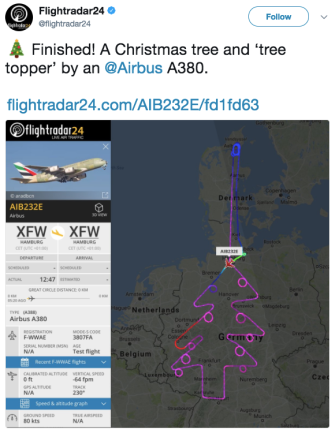 The curious trajectory can be spotted here on Flightradar24.com.

The poisoned candy legend is just one way that American fears manifested: as an easily understood threat to innocence.
Starts With A Bang

No, we probably didn’t detect our first planet in another galaxy

Named M51-ULS-1b, it's certainly a curious astronomical event. But the evidence is far too weak to conclude "planet."
Neuropsych

Intrapreneurs tap into the spirit of entrepreneurialism to innovate and find personal meaning at work, but organizations need to celebrate their efforts more.
Up Next
Big Think+

With the new year fast approaching, people often start brainstorming some personal goals to improve themselves and their lives. However, these “New Year’s Resolutions” aren’t exclusive to individuals. Organizations can […]