What if the Black Plague had killed off almost all Europeans? Then the Reconquista never happens. Spain and Portugal don’t kickstart Europe’s colonization of other continents. And this is what Africa might have looked like.

The map – upside down, to skew our traditional eurocentric point of view – shows an Africa dominated by Islamic states, and native kingdoms and federations. All have at least some basis in history, linguistics or ethnography. None of their borders is concurrent with any of the straight lines imposed on the continent by European powers, during the 1884-85 Berlin Conference and in the subsequent Scramble for Africa. By 1914, Europeans controlled 90% of Africa’s land mass. Only the Abyssinian Empire (modern-day Ethiopia) and Liberia (founded in 1847 as a haven for freed African-American slaves) remained independent. 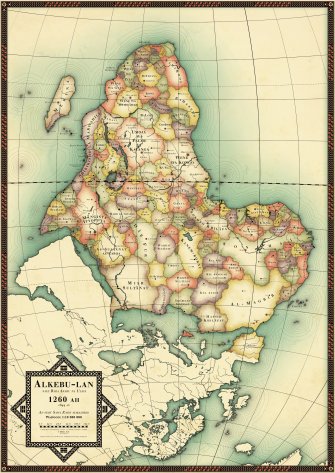 This map is the result of an entirely different course of history. The continent depicted here isn’t even called Africa [1] but Alkebu-Lan, supposedly Arabic for ‘Land of the Blacks’ [2]. That name is sometimes used by those who reject even the name ‘Africa’ as a European imposition. It is therefore an ideal title for this thought experiment by Swedish artist Nikolaj Cyon. Essentially, it formulates a cartographic answer to the question: What would Africa have looked like if Europe hadn’t become a colonizing power?

To arrive at this map, Cyon constructed an alternative timeline. Its difference from our own starts in the mid-14th century. The point of divergence: the deadliness of the Plague. In our own timeline, over the course of the half dozen years from 1346 to 1353, the Black Death [3] wiped out between 30 and 60% of Europe’s population. It would take the continent more than a century to reach pre-Plague population levels. That was terrible enough. But what if Europe had suffered an even more catastrophic extermination – one from which it could not recover? 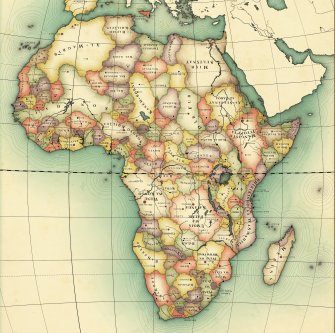 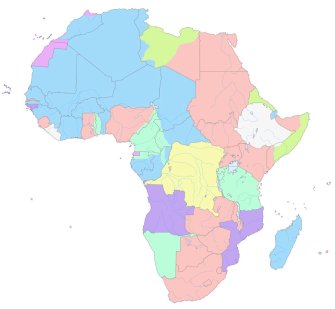 Cyon focuses on Africa – or rather, Alkebu-Lan – which in his version of events doesn’t suffer the ignomy and injustice of the European slave trade and subsequent colonization. In our timeline, Europe’s domination of Africa obscured the latter continent’s rich history and many cultural achievements. On the map of Cyon’s Africa, a many-splendored landscape of nations and empires, all native to the continent itself, gives the lie to the 19th- and 20th-century European presumption that Africa merely was a ‘dark continent’ to be enlightened, or a ‘blank page’ for someone else to write upon.

Basing himself on Unesco’s General History of Africa, Cyon built his map around historical empires, linguistic regions and natural boundaries. His snapshot is taken in 1844 (or 1260 Anno Hegirae), also the date of a map of tribal and political units in Unesco’s multi-volume General History. 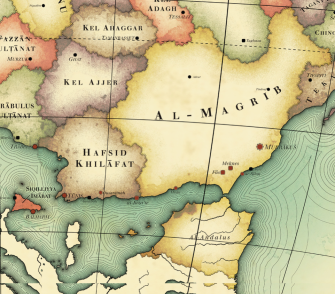 Zooming in on the northern (bottom) part of the map, we see an ironic reversal of the present situation: in our timeline, Spain is still holding on to Ceuta, Melilla and other plazas de soberania in Northern Africa. In Cyon’s world, most of the Iberian peninsula still called Al-Andalus, and is an overseas part of Al-Maghrib, a counterfactual Moroccan superstate covering a huge swathe of northwestern Africa. Sicily, which we consider to be part of Europe, is colored in as African, and goes by the name of Siqilliyya Imārat (Emirate of Sicily).

A Sultan is an independent Islamic ruler who does not claim spiritual leadership. Five states in the greater Somalia region are Sultanates, for example: Majerteen, Hiraab, Geledi, Adāl and Warsangele. Others include Az-Zarqa (in present-day Sudan), Misr (Egypt, but also virtually all of today’s Israel), and Tarābulus (capital: Tripoli, in our Libya).

An Emir is a prince or a governor of a province, implying some suzerainity to a higher power. There’s a cluster of them in West Africa: Trarza, Tagant, Brakna, all south of Al-Maghrib. But they are elsewhere too: Kano and Katsina, just north of Sokoto.

Neither European nor Arab influence is in evidence in the southern part of Africa – although some toponyms relate directly to states in our timeline: BaTswana is Botswana, Wene wa Kongo refers to the two countries bearing that name. Umoja wa Falme za Katanga is echoed in the name of the DR Congo’s giant inland province, Katanga. Rundi, Banyarwanda and Buganda, squeezed in between the Great Lakes, are alternative versions of ‘our’ Burundi, Rwanda and Uganda. 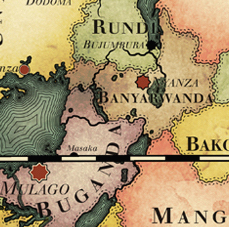 The name was taken up by European cartographers and the territory it covered eventually reached deep inland. But because of its long association with colonialism, and also to fix his own imprint on the country, Congo’s dictator Mobutu in 1971 changed the name of the country and the stream to Zaïre. The name-change was part of a campaign for local authenticity which also entailed the Africanisation of the names of persons and cities [5], and the introduction of the abacos [6] – a local alternative to European formal and businesswear.

Curiously for a campaign trying to rid the country of European influences, the name Zaïre actually was a Portuguese corruption of Nzadi o Nzere, a local term meaning ‘River that Swallows Rivers’. Zaïre was the Portuguese name for the Congo stream in the 16th and 17th centuries, but gradually lost ground to Congo before being picked up again by Mobutu. 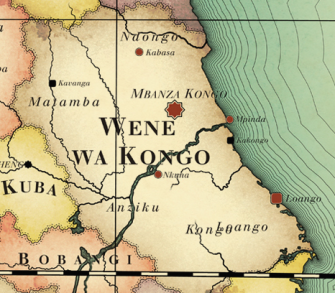 Kongo – a coastal superstate in the alternative timeline.

[1] A name popularized by the Romans. It is of uncertain origin, possibly meaning ‘sunny’, ‘dusty’ or ‘cave-y’.

[2] The origin and meaning of the toponym are disputed. The Arabic for ‘Land of the Blacks’ would be Bilad as-Sudan, which is how the present-day country of Sudan got its name.Other translations offered for Alkebu-Lan (also rendered as Al-Kebulan or Alkebulan) are ‘Garden of Life’, ‘Cradle of Life’, or simply ‘the Motherland’. Although supposedly of ancient origin, the term was popularized by the academic Yosef A.A. Ben-Jochannan (b. 1918). The term is not a 20th-century invention, however. Its first traceable use is in La Iberiada (1813), an epic poem from 1813 by Ramón Valvidares y Longo. In the index, where the origin of ‘Africa’ is explained, it reads: “Han dado las naciones á este pais diversos nombres, llamándole Ephrikia los Turcos, Alkebulan los Arabes, Besecath los Indios, y los pueblos del territorio Iphrikia ó Aphrikia: los Griegos, en fin, le apellidaron Libia, y despues Africa, cuyo nombre han adoptado los Españoles, Italianos, Latinos, Ingleses y algunos otros pueblos de la Europa”.

[5] The ‘founder-president’ himself changed his name from Joseph-Désiré Mobutu to Mobutu Sese Seko Kuku Ngbendu wa za Banga. The capital Léopoldville was renamed Kinshasa, after an ancient village on the same site.

[6] Despite the African-sounding name, abacos is an acronym of à bas costumes, or: ‘Down with (Western) suits’.

Related
Empowering growth
7 essential management training topics for every team leader
From emotional intelligence to problem solving, these management training topics will set team leaders up for success.
Thinking
What if you could rewire your brain to conquer suffering? Buddhism says you can
For Buddhists, the “Four Noble Truths” offer a path to lasting happiness.
Hard Science
Solved: 500-year-old mystery about bubbles that puzzled Leonardo da Vinci
The solution involves the infamous Navier-Stokes equations, which are so difficult, there is a $1-million prize for solving them.
3 game theory tactics, explained
How to maximize wins and minimize losses, explained by four experts on game theory.
▸
7 min
—
with
Kevin Zollman
Health
When’s the best time to consume caffeine? Hint: Not right after you wake
Get the most out of your coffee.
Up Next
Personal Growth
Google’s Algorithm for Happiness at Work and in Life
We all want to be happy. Some have even said that achieving happiness is the goal of life. But we wouldn’t look to a technology company for such wisdom, would we?