Brits have a knack for pet-naming bad weather phenomena. The cold snap that blew in from Siberia a few months ago was “The Beast from the East”. The rough patch that swept over the country past weekend has been dubbed “The Mother of all Thunderstorms”.

The south of England was lashed by heavy rains and struck by lightning up to 20,000 times. The dramatic wave of lightning bolts sweeping across London and the south elicited superlatives from usually more reserved professionals. “This (is) utterly insane (…) I’ve never seen a storm with such frequent lightning in my life I don’t think”, tweeted BBC weatherman Tomasz Schafernaker.

The shock and awe of last weekend’s light show across southern Britain may be down to the fact that the UK is not particularly prone to lightning strikes per se.

As these maps show, lightning strikes are not spread out evenly across the globe. What was exceptional in southern England would have seemed less so in large parts of the U.S., Southeast Asia and Africa – but then again, in other parts of the world, lightning is conspicuous only by its absence. It seems like it never strikes in Egypt, for instance.

Lightning is one of nature’s superlative spectacles. A bolt of lightning is about six times hotter than the surface of the sun (1). Every second, an average of 100 lightning bolts strike the Earth. That’s about 8 million per day, 3 billion each year.

This map was compiled by Vaisala, operator of the global lightning detection network GLD360. It tracks nearly 8.8 million lightning strikes between 2013 and 2017. While the company points out that lightning distribution patterns differ annually due to weather variations, it is clear that there are lightning ‘hot spots’ and ‘not spots’.

The hot spots generally occur where masses of air frequently collide, often (but not necessarily) near mountains.

Lightning occurs when the hot ground heats the air above. As the warm air rises, water vapours cool and clouds form. As the air continues to rise, the vapour in the top of the clouds turns into ice.

Most lightning occurs within the clouds, but positive charges on the ground can be attracted to the negative charges at the bottom of clouds. That’s when lightning hits the ground, often on things poking up out of the ground: tall buildings, trees, or even people.

According to the British Medical Journal, the chance of being hit by lightning in your lifetime is about 1 in 10 million (the same as dying from a nuclear power accident, or from a new variant of Creutzfeldt-Jakob disease, a.k.a. Mad Cow disease). To put that in context: the risk of being hit in your home by a crashing aeroplane is 1 in 250,000, of being murdered is 1 in 100,000, by driving (over a period of 50 years) 1 in 85.

As astronomically small as the chance of death by lightning may seem, no less than 24,000 people die as a result of lightning strikes each year (this includes both direct hits and death by indirect consequences, e.g. by fires caused by lightning). That being said, 90% of people struck by lightning live to tell the tale (2). 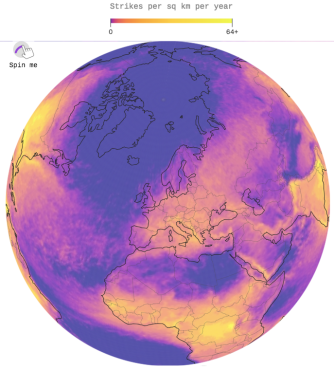 As this map of Europe shows, the UK suffers significantly less lightning strikes than much of continental Europe, where the Alps seem to be a lightning hot spot. Indeed, the Royal Society for the Prevention of Accidents has calculated that no more than three people on average are killed each year by lightning strike in the UK. Considering the appropriate variables, that is 66 times less than the global average. 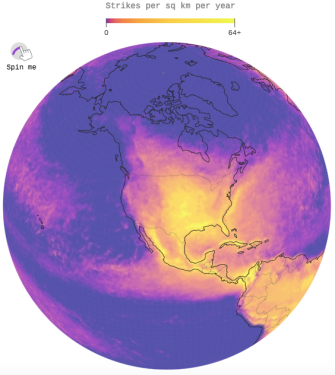 North America is much more prone to lightning strikes than Europe, and certainly the UK. The Great Plains, a.k.a. the ‘Tornado Belt’, and the Gulf Coast are particularly lightning-heavy. California and the Pacific Northwest suffer less. The bolts peter out further north into Canada. Mexico’s Pacific coast is particularly sensitive to strikes. 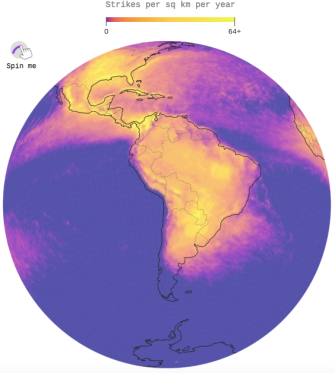 In South America, the hottest spots are in the north of Colombia, followed by Paraguay and northern Argentina, the interior of Brazil and the mountainous areas of Peru and Bolivia. Patagonia, at the bottom of the continent, is virtually lightning-free. 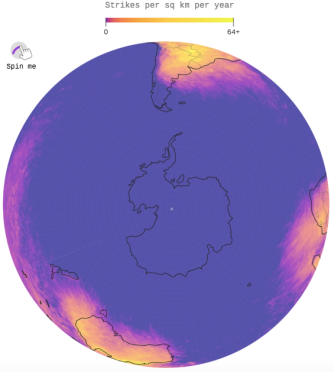 If you suffer from astraphobia (3), consider seeking an assignment in Antarctica. The entire continent is free of lightning. 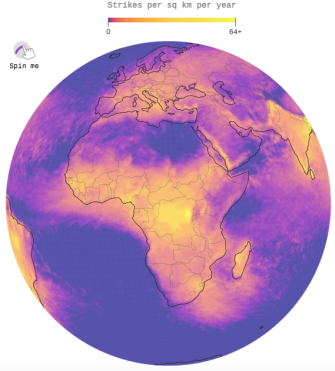 A peculiar dichotomy in Africa: the Democratic Republic of Congo is its a massive lightning hot spot, while the hot, dry Sahara in the north is a ‘not spot’. 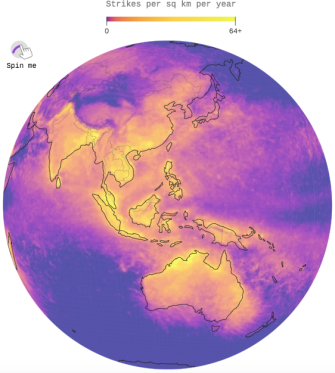 In Asia, the northeast and southern parts of India (and Sri Lanka) are high-risk areas for lightning strikes, as are the Indonesian islands of Sumatra and Java, as well as the Malaysian peninsula. Australia’s northern coast also gets plenty of hits. Lightning is much rarer in Asia’s interior (and in New Zealand).

Climate change seems to be affecting the pattern of lightning strikes, with higher than usual numbers being recorded in Alaska over the past few summers.

Maps found here at Axios. Many thanks to Mark Feldman for sending this in.

(2) U.S. park ranger Roy Cleveland Sullivan survived seven separate lightning strikes between 1942 and 1977, more than any other person ever recorded.

The way you are advertised and marketed to is about to change, in a very big way.