Biblical literalists claim the world was created in six days. More scientifically minded folk say it took around 4 billion years. Either way, they’re all talk and no action. Unlike Søren Poulsen, the Danish farmer who single-handedly built his own version of the world, in exactly a quarter century. Completed in 1969, Verdenskortet (“The World Map”) is the main tourist draw in Klejtrup, a small village 10 km southwest of Hobro in Jutland, the mainland of Denmark. 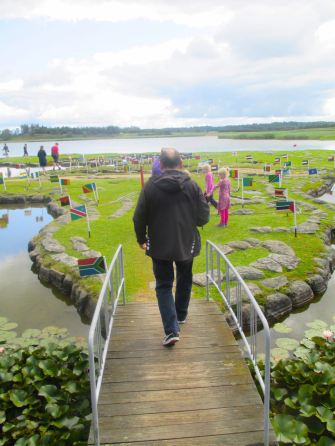 Taking the footbridge from Denmark to Africa.

Poulsen got the idea for his world map in 1943. While draining his fields next to Klejtrup Sø, the local lake, he found a rock shaped just like Jutland. As other entertainment was hard to come by in Nazi-occupied Denmark, Poulsen started laying out big rocks in the shape of continents on a frozen inlet of the lake, helping them settle in the right place when spring came and they sank to the harbor’s shallow bottom. 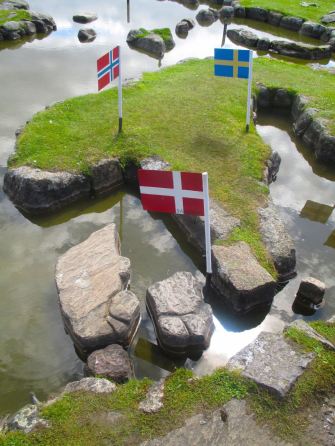 Is this the original Jutland Stone?

Over the course of many years, the World Map took shape. In that time, Poulsen devised his own solution to that fundamental problem of cartography: How do you represent a three-dimensional globe on a two-dimensional surface? The Mercator projection solved this by way of a cylindrical projection, which keeps parallels and meridians straight and perpendicular to each other. Mercator’s solution was good news for sea captains — lines of constant bearing (or loxodromes) can be represented by straight lines on the map — but bad news for land lubbers: The cylindrical projection distorts the actual size of things, especially closer to the poles. 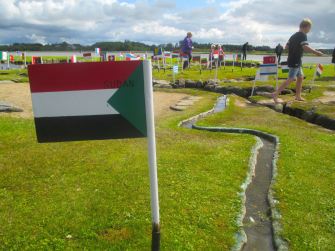 Mercator’s Greenland is about the same size as his Africa, while in fact Africa is 14 times bigger. Poulsen wanted to avoid those distortions, and he did this by leaving out the South Pole and by representing some areas of the Northern Hemisphere twice. Greenland is the exact size, but there are two of them. Ditto for parts of North America and Europe. Perhaps not an ideal solution, as map purists will baulk at these duplications. But they can just stay in the cafeteria and have an ice cream, all by their insufferable selves. 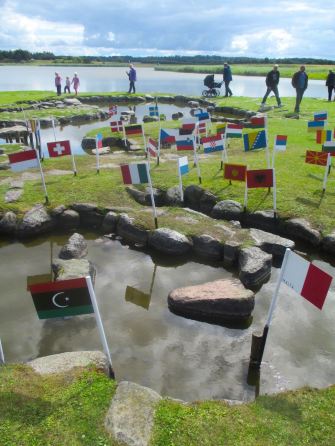 The short hop from North Africa to Italy, of late a popular, but deadly route into Europe for African migrants.

All other map fans will be thrilled when crossing the bridge into southern Africa, skipping across the Mediterranean to Europe, wandering through the vast expanses of Asia and walking up and down the Americas. The map measures 45 by 90 metres (49 by 98 yards) and one degree of latitude (111 km, 69 mi) corresponds to 27 centimetres (11 in) on the map. In all, it covers 5,000 m2 (just under 54,000 sq. ft). The continents and some countries are marked by their names in the grass. 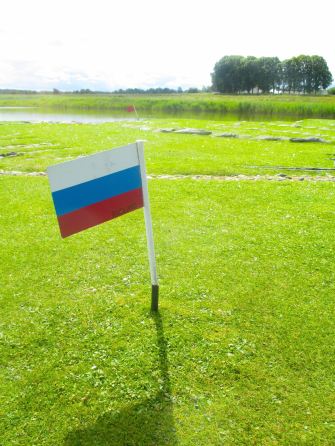 Even in miniature, Russia is huge. That little red flag in the distance, that’s China.

The fact that U.S. states are outlined in yellow bricks may be due to the fact that Poulsen had emigrated to the U.S., returning to his hometown 20 years later. Perhaps the emigration also triggered Poulsen’s interest in geography. The outline of Verdenskortet has remained unchanged since 1969, the year in which Poulsen died at the age of 81, a few months after completing the map. 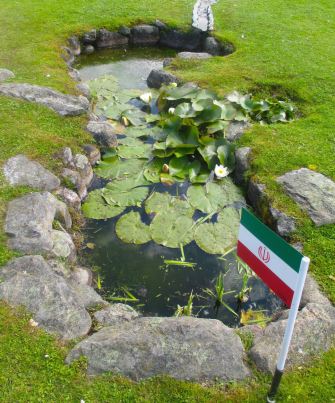 Fifty years may indeed be a bit short for the continents to perceptibly shift shape or change place, but long enough for a lot of countries to have left and entered the geopolitical stage. Every year, the park’s team updates the flags that dot the map. They were quite busy in the 1990s, when the fall of communism upended the status quo in Central and Eastern Europe. This new century, they have only had to add East Timor (2002), Montenegro (2006), and South Sudan (2011). 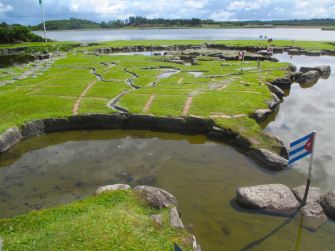 Communism is only three feet away: mini Cuba and mini U.S.

Poulsen’s Map of the World invites comparison to the similar project still taking shape off the coast of Dubai. That project, The World, is on a much grander scale, aimed at the super-rich, and as yet mostly still a collection of shapeless sand banks (see#686). For a more inspiring, human-sized and egalitarian model of the world, where anyone who can pay the 70 Danish crowns admission fee (DKK 50 for kids between 2 and 12) gets to continent-hop, go find this very Danish Map of the World on your map of Denmark. 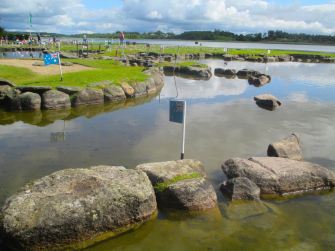 New Zealand, off Australia, with Asia in the distance.

More on the park at www.verdenskortet.dk (scroll down to Sprog to choose English). Many thanks to Per Wiberg for showing me around.

A vertical map might better represent a world dominated by China and determined by shipping routes across the iceless Arctic.
Up Next
Culture & Religion

A vaccine that did not exist a year ago has proven 100 percent effective at preventing people who are at extremely high risk of infection from contracting the Ebola virus.