What unites the many, varied countries of Southeast Asia? Their railways suck. For reasons historical, geographical and accidental, the region is underserved by rail. Not that there haven’t been plans aplenty to fix the problem. Here’s a map of what a Southeast Asian integrated regional rail network would look like, if all those plans were to be realised.

In black: lines currently in use. In red: proposals for future lines. These lines were either proposed at some point as an election promise, are undergoing a feasibility study, or are currently under construction. In blue: additional proposals by James Clark, who produced this map. A Melbourne native, James is a digital nomad, currently based in Vietnam and travelling a lot around the region. Although not a lot by train.

Because of the lack of modern rail infrastructure in the region, “the time it takes to travel relatively short distances on roads and old railways is a major inconvenience”, says James. “Often, it’s faster to get a bus than the train, which should never be the case. The fact that roads are overcrowded makes delivering goods much slower, which is an inconvenience for the local economy”.

There are several reasons why Southeast Asia remains underserved by rail. One is the fact that many of the railways in the region, especially in India, Bangladesh and Indochina, were built in colonial times on a metre-gauge single track, and most countries have been getting by with that system ever since.

Metre-gauge (1,000 mm or 3 ft 3 3/8 in) is not just the narrowest, but also the least used of the five main gauges, covering just 7% of the world’s total track. In contrast, standard gauge (1,435 mm or 4 ft 8 ½ in) covers 55%. In short, while the single track makes two-way traffic within the system difficult, the non-standard gauge makes connecting with neighbouring systems impractical.

Also: “The railways of Vietnam and Cambodia were built during colonial times, and then fell into disrepair during the war years”, says James. And “in Maritime Southeast Asia (i.e. Indonesia and Philippines), money for infrastructure has to be spread out over hundreds of islands, so developing a railway on the biggest islands is harder”.

And indeed, the contrast between rail reality and train utopia is widest in Indonesia and the Philippines.

The island of Java, Indonesia’s most densely populated island, is well served by rail: you can take the train all the way from Merak on the western edge of the island to Banyuwangi, in the very east of Java. The only proposals for additional track (in red) here are a relatively short connection between Bandung in the south to Keratjati in the north, and from the capital Jakarta to the airport. The small, unserved island to the east of Java (inset left) is Bali, by the way.

But Sumatra, Java’s neighbour to the west, is not so blessed. Four disjointed bits of rail connect Medan to Rantau Prapat, Padang Panjang to Muara Kalaban, Pariaman to Pagang and Palembang to Bandar Lampung. Wouldn’t it be nice if Sumatra too had a rail terminus on either side of the island, so the furthest west you could get from Bandar Lampung wasn’t Lubuk Linggau but Bandar Aceh? 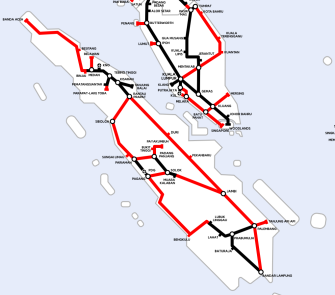 And yet the Sumatrans are lucky: at least they have some rail. No such luck for inhabitants of Indonesia’s other big islands where all the lines are red – i.e. fictional.

A similar picture in the Philippines: you can get by train from Manila to Calamba, and from Naga to Legazpi, but apart from those two short stretches on the main island of Luzon, the country is entirely unserved by rail. So forget about taking the train in Zamboanga in the west of Mindanao all the way to Surigao in the northeast. And perhaps one day Tarlac will be the hub where the lines from Laoag, Tuguegarao and Batangas meet. But not today, and probably not tomorrow either. 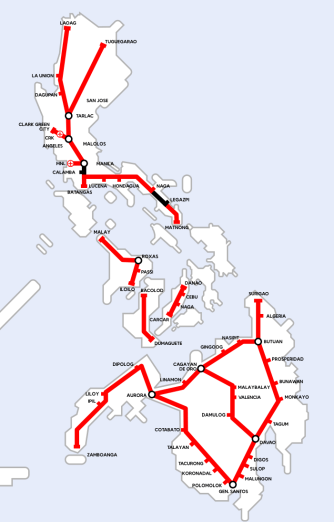 Trainspotters are in better luck on the southern tip of the Malay peninsula, where they can take the train from Woodlands in Singapore north into Malaysia; the line splits at Gemas, with the eastern branch continuing to Tumpat on the Thai border, and the western branch going to the capital Kuala Lumpur, and actually connecting up with the Thai rail system, beyond Padang Besar. Not that there isn’t room for improvement: connecting Pasir Mas on the eastern branch to Su-Ngai Kolok in Thailand, for example. There could be more connections and spurs throughout the rest of the peninsula. 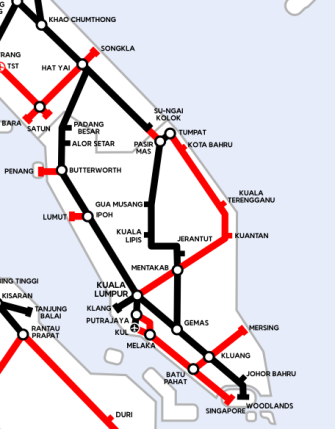 And connecting up the lonely bit of black rail in the Malaysian part of Borneo, between Tenom and Kota Kinabalu via Beaufort, to an as yet wholly imaginary Borneo circular railroad. 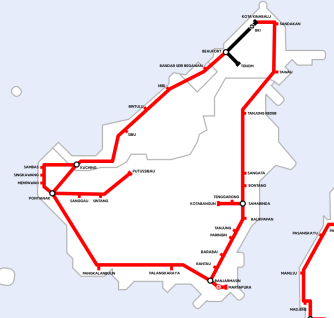 The Thai railway system is relatively dense, and allows for train travel up and down the country. But the system is almost entirely unconnected to its neighbours. Except for that connection to Malaysia, the only other border crossing by rail is towards Vientiane, the Laotian capital. Which means Thai Rail entirely manages to avoid crossing over into Burma/Myanmar and Cambodia; and which also means that there are no connections to nearby China via the northern bits of Laos or Burma/Myanmar.

Additional red lines would provide for a denser network in southern Thailand (with a blue line linking up Ranong to Myeik in Burma/Myanmar). Two red lines (and a blue one) would connect to Cambodia. Three extra links, including over the famous Three Pagodas Pass, would provide access to southern Burma/Myanmar. In the north, Chiang Rai would become a hub for lines crossing into northern Burma and Laos, and eventually joining again at Xishuangbanna in China, to continue all the way to the (existing) Chinese rail station at Kunming.

The most impressive line cutting through Thailand would in its totality cross four countries, going from Thaton in Burma over Lom Sak in Thailand and Savannakhet in Laos to terminate and Dong Ha in Vietnam. 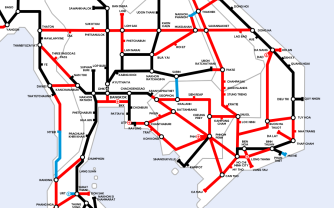 Laos is the opposite of an island, but the entirely landlocked country is as rail-starved as Bali or Sulawesi. In the optimal scenario, it becomes a transit country for rail traffic to and from China, Vietnam, Cambodia, Thailand and Burma. Take the Vientiane to Phnom Penh train with stops at Pakse, 4,000 Islands and Cheung Prey? Not yet, but perhaps one day.

Vietnam has a decent rail network, connected to the Chinese one at Dong Dang. But it lacks links to its neighbours, and would benefit from an obvious second connection to China, between Lao Cai and Hekou. Plus, there are some big gaps in the south. As the map shows, you can get quite far south from Hanoi, but the train stops at Tuy Hoa and doesn’t take you all the way to Ho Chi Minh City – let alone Ca Mau.

In Cambodia, the train takes you from the capital to Sihanoukville on the coast, but nowhere else (unless you want to stop on the way, at Kampot). In an ideal scenario, Phnom Penh is a hub for international traffic, and a stop for travellers from Bangkok to Vietnam.

Burma, finally, has a decent central network, but no connection to its neighbours. In the red scenario, the network would be linked to India, with one line going to Kolkata, the other connecting to the Delhi line. Further connections to China, Thailand and (a blue one) to Malaysia would integrate the formerly reclusive country into its neighbourhood. 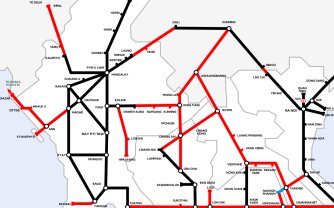 A transnational railway system for Southeast Asia could be an incredible boost to the region’s economy. However, of the many lines marked red on this map, only five projects are actually under way at present. “That doesn’t sound like much”, says James, “but two of those are mega-projects: Laos from the Chinese to Thai border, and the East Coast Rail Link in Malaysia which is over 600km long”.

So, what are the obstacles to turning the rest of the red lines on this map black? “Lack of space for new railways is one factor. Cities have been built up without any plan to make a clearway for future railways, so acquiring land is a costly and time-consuming process. Most of the railways are built on a one-metre gauge, while China and Europe use the wider standard gauge. With China looking to connect their rail network to Mainland Southeast Asia, railways in Thailand, Vietnam, and Myanmar will need to be converted. Terrain is another factor, with mountainous regions being a natural obstacle”.

That sounds like a tall order, but obstacles – natural and otherwise – can be overcome: “Now that China is pouring money into the region, the proposals are at least becoming attainable. It’s hard to predict when a railway network that resembles this map would be built. I have archived news articles where the same promises are made every year going back over a decade”.

“What I can see happening is that once a big project is completed, it may hasten the construction of other lines. With the line from China being built through Laos, Thailand now have to start their new railway from Bangkok to the Laos border. and if the Singapore-Kuala Lumpur high-speed rail goes ahead this year, then there is more incentive to build a Bangkok-Kuala Lumpur high-speed train to meet that train”. 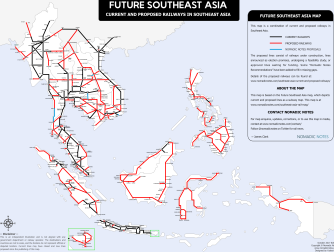 Many thanks to James Clark for sending in this map. More on that here, on his blog Nomadic Notes.

Related
13.8
The weirdness of quantum mechanics forces scientists to confront philosophy
Though quantum mechanics is an incredibly successful theory, nobody knows what it means. Scientists now must confront its philosophical implications.
Neuropsych
Why is a Starbucks loyalty rewards program making customers so angry?
The rewards price to get a free cup of hot coffee at Starbucks is going up.
Empowering growth
7 essential management training topics for every team leader
From emotional intelligence to problem solving, these management training topics will set team leaders up for success.
Thinking
What if you could rewire your brain to conquer suffering? Buddhism says you can
For Buddhists, the “Four Noble Truths” offer a path to lasting happiness.
Hard Science
Solved: 500-year-old mystery about bubbles that puzzled Leonardo da Vinci
The solution involves the infamous Navier-Stokes equations, which are so difficult, there is a $1-million prize for solving them.
Up Next
Politics & Current Affairs
314 Action Is on the Forefront in The “War Against Science”
Scientists feel under attack. This is how they’re fighting back.