A unified Germany is both too big to be a ‘normal’ European country, and too small to conquer the entire continent. Its power must be dissolved in a supranational structure – which will be all the more powerful by having Germany at its centre.

That’s solving a problem by turning it into a paradox. It could be a shorthand definition of the European Union. But the EU, which grew out of the European Coal and Steel Community (°1951), was not the first such proposal.

Here’s an extraordinary suggestion to prevent future conflict in Europe, proposed shortly after the end of the First World War. The 1920 map, in German, envisions a new Europe with lasting peace (Das neue Europa mit dem daurenden Frieden), via the means of political unification of Central Europe (Die Unionisierung Mitteleuropas).

The bulk of the European mainland would be united in a unitary state, governed from Vienna, renamed Unionshauptstadt Sankt Stephan (Union Capital St. Stephen). In this Union, there would be no place for ‘traditional’ member states as they had emerged from history, or could be construed by linguistic, ethnic or religious affiliation. It would do away with the traditional states of Europe. Instead, it would be sliced as a pie into 24 straight-bordered cantons radiating from the capital, all purposely ignoring the continent’s variety of languages, religions and peoples. 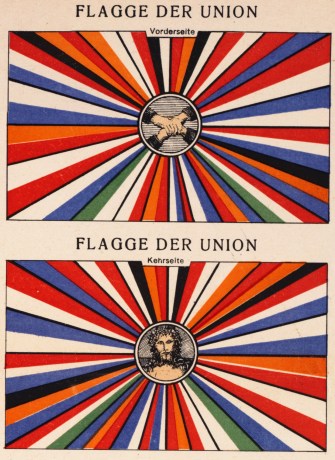 This European Union would exclude Scandinavia, Ireland and the UK, Spain and Portugal, most of Italy (to be transformed into a Papal State) and the Russian Empire. Also independent: Bulgaria, Greece (including Sicily and the southern tip of Italy) and a Serbian-Albanian Empire. The three entry points to the Mediterranean would be turned into neutral zones: Suez, Gibraltar-Ceuta and Constantinople (including the Dardanelles). Palestine would be turned into a Hebrew Empire.

So, where does this fantastic map come from? The author is a P.A.M., tentatively identified as P.A. Maas, the son of Otto Maas, the Vienna-based printer of the 24-page pamphlet in which the map appears.

The pamphlet offers a critique of the recently-concluded Treaty of Versailles, which it sees as an obstacle to lasting peace. In my project, the author says,

“the nation states are definitely torn apart, but they are as it were joined together under one roof, by creating sub-regions in which all nations are fused (…), in which racial hatred does not prevail as before, but the love of the people wins out, thus bestowing happiness and blessings on all in that unitary nation”.

The arbitrariness of the 24 cantons, each named after their capital, was meant to “solve and bury forever” the traditional disputes between the peoples of Europe. All the cantons would meet at St Stephen’s Cathedral in Vienna. The inset on the lower left hand side of the map seems to suggest that the authority of the cantons would not reach that far. 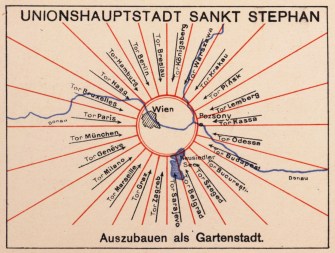 The cantons (almost) meeting up at the Union Capital of St Stephen (formerly known as Vienna).

The Union Capital formerly known as Vienna would form a circular capital territory, perhaps similar to the District of Columbia in the U.S., but conceived as a Gartenstadt (‘Garden City’). On the circular border of the Union Capital would be built 24 gates, each corresponding to the canton to which it gave access (Tor Bruxelles, Tor München, Tor Budapest, etc).

Despite the deliberate division into 24 cantons, the Union would recognise four constituent Nations: Romans, Germans, Slavs and Magyars. The first three of these are to be further subdivided into different peoples. Each canton includes people from at least two Nations. Further in the pamphlet, it is proposed that the colonies of the former states now composing the Union should be jointly administered; that the Union president serve a term of no more than three years; and that the presidency rotate between the four Nations recognised by the Union. All persons over 20 would have the vote, except married women. Esperanto was to be the common language of the Union, and used in classes throughout the Union for half of the available teaching time.

Some proposals for cantonal flags.

P.A. Maas – if he really is the author of the pamphlet – had great hopes for his vision, though not in the immediate future:

“Someday, though late, the knowledge of truth will gain the upper hand, and perhaps many things which have been stimulated by me here will be realised. This would be the most beautiful reward of my quite selfless, long, and elaborate intellectual work”.

If that fine day yet arrives, we will finally be sure of P.A.M.’s identity:

“I have informed a Notary of my name, profession and role as author and editor of this work of peace, and it will be announced only when the four principal Nations in the Union have expressed their judgment publicly”. 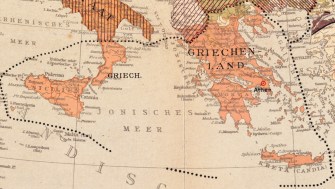 Greece without a trace of Thrace, but with the whole of Sicily, and a slice of Italy.

Image found here at the PJ Mode Collection of Persuasive Maps at the Cornell University Library.

Running to catch the bus might help you live longer.
Up Next
Starts With A Bang

Universe’s Largest Black Hole May Have An Explanation At Last

Black holes shouldn’t be this big, much less this big so many billions of years ago. Yet here we are.“Ultramassive black holes — that is, black holes with masses exceeding 10 billion solar […]