What would Europe have looked like, had Imperial Germany won World War One? This image is taken off a French magazine at the start of the war, painting an exaggerated picture of German (and Austro-Hungarian) land-grabs in a Europe dominated by the victorious Central powers.

In this Europe, ‘grande Allemagne’ has gobbled up all of Luxembourg and Belgium, most of France (leaving only a mini-French state around Biarritz) and extends far into Eastern Europe. Great Britain is a German colony, Ireland a dependency of Austro-Hungary, which rules most of southern and eastern Europe. 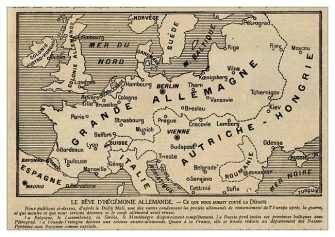