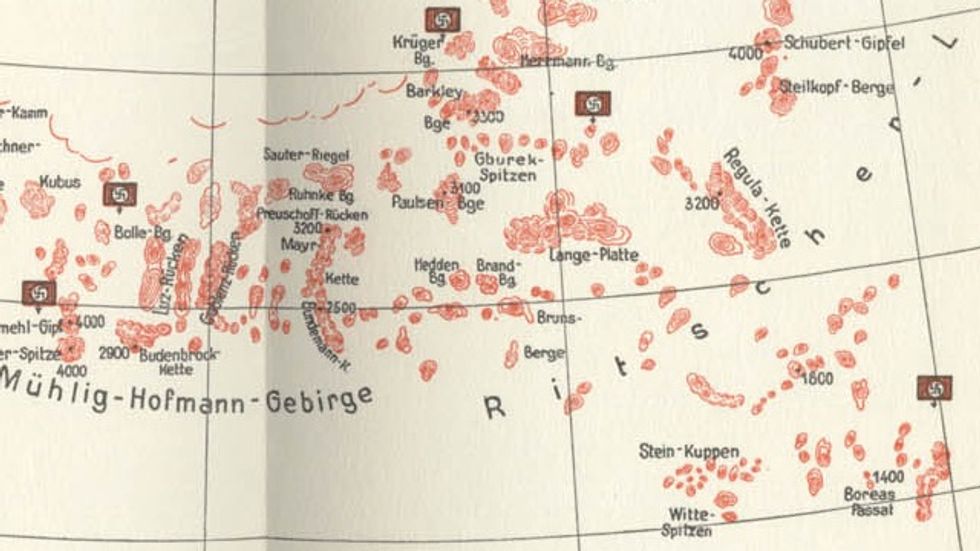 Ever since it achieved unification in 1871, Germany craved colonies as a matter of national pride. But by the late nineteenth century, most of the ‘uncivilised world’ was already carved up by established European powers. In an eleventh-hour effort, the German Empire acquired a few scraps of Africa and Asia – mainly wild or empty lands nobody else wanted. And even this colonial empire, with the bits few and far between, was taken away after Germany’s defeat in the First World War.

The revanchist mood that swept the Nazis into power in the early nineteen thirties also revived Germany’s by now totally outdated colonial ambitions. Those were turned to the last great area of the globe that was not yet colonized: Antarctica – big, cold and empty. At the beginning of 1939, a Nazi expedition explored a hitherto uncharted area of the Antarctic. By foot and plane, the Nazis surveyed an area between latitudes 69°10’ S and 76°30’ S and longitudes 11°30 W and 20°00’ E, totaling 600.000 sq. km. They called it Neuschwabenland, or New Swabia.

At first glance, Neuschwabenland doesn’t warrant much enthusiasm. Most of it is covered in eternal snow and ice, with only a few places ice-free, mainly around a few hot springs. Yet annexation was an express purpose of the expedition, led by captain Alfred Ritscher, ordered by Hermann Göring himself. Before leaving, the expedition members received practical advice from Richard E. Byrd, an American admiral and experienced polar explorer.

The German airline Lufthansa lent one of its ships, the ‘Schwabenland’ for the expedition – hence the name that was given to the territory. The vessel was a so-called ‘catapult ship’, having before proved itself as a transporter and postal carrier in the South Atlantic. The ‘Schwabenland’ had two Dornier aircraft on board, named Boreas and Passat. A steam catapult was used in flinging the planes, each weighing 10 tonnes, off the ship.

The planes were used for reconnaissance flights over the impassable hinterland of the heretofore unexplored part of Antarctica, and were thus instrumental in the German Antarctic Expedition. Each plane could stay in the air for a maximum of nine hours and no inland airfields were constructed, so this provided the outer limit for the area to be explored.

In total, 350.000 sq. km were overflown and more than 11.000 photographs taken during 15 flights. These pictures were used in drawing up a map of the territory. During the flights and expeditions on foot, hundreds of Nazi German flags were dropped to symbolize Germany’s possession of the territory. Additionally, the expedition established a provisory base camp and reported that around the so-called Schirmacher See there existed some vegetation, due to the hot springs near the lake.

Capt. Schirmer was prevented from mounting a second, improved expedition by the outbreak of World War Two. During the war, no official activities were registered in the whole of Antarctica. After the war, Norway assumed a protectorate over the area, annexing it to Queen Maud Land. Following the 1957 Antarctic Treaty (the one ‘freezing’ all territorial claims), Norway named its new acquisition after princesses Martha, Raghnild and Astrid.

In 1952, the government of the new Federal Republic of Germany exercised its right, based on the Nazi exploration, to name geographical features in the area.  The German polar research station ‘Georg von Neumayer’ is located in what was formerly known as Neuschwabenland. Thus endeth the official version.

A plethora of rumours maintains that Neuschwabenland wasn’t abandoned by the Nazis after the first expedition. In fact, a few crew members of the ‘Schwabenland’ stated that they made several trips to the Nazis’ Antarctic colony, transporting military equipment and heavy tools for mining and tunneling. This must be the origin of the legend that several submarines filled with top-level Nazis fled Europe as the war was ending, finding refuge in a secret network of underground bunkers in Neuschwabenland.

Some stories even maintain that this little Nazi hideaway is the real origin of UFOs (or rather Reichsflugscheiben) – as they really are a German invention rather than an extraterrestrial one.

This map is taken from this page at www.hi-story.de, a German-language history website.