Nobody today would mistake California for an island. It is firmly attached to the rest of mainland North America. Yet for centuries, off and on, California was shown on maps as an island. The origin of that misconception was… a Spanish romantic novel.

“on the right hand of the Indies there is an island called California very close to the side of the Terrestrial Paradise; and it is peopled by black women, without any man among them, for they live in the manner of the Amazons.”

When a mutineer from Hernan Cortez’s expedition into Mexico in 1533 discovered the peninsula that today is known as Baja California, followed by a visit to the southern tip of the peninsula by Cortez himself, the Spanish conquistadores thought they had stumbled on the legendary California described in Montalvo’s novel – not quite comprehending that the literary creation was entirely fictional.

Expeditions in 1539 and later seemed to indicate that this California was a peninsula, and at first it was thus shown on maps, including some by Mercator and Ortelius. However, the fictional accounts of Juan de Fuca, who claimed to have found a large opening in the western coast of North America, possibly the legendary Northwest Passage, were conflated with the older misconception of an insular California, and kept that cartographic persona on life support.

Further inspiration was provided by the overland expedition by Juan de Oñate who descended the Colorado River (1604-1605) and believed he saw the Gulf of California continuing off to the northwest.

California reappeared on the map as an island for the first time in 1622 in a map by Michiel Colijn of Amsterdam. This image would endure far into the 18th century. Only after an expedition by Father Eusebio Kino, from 1698 to 1701, did it become apparent that Baja California is indeed connected to the mainland in the north.

Some cartographers, following a by now old cartographic tradition, and perhaps wishing to preserve some of the edge-of-the-world magic first proposed by Montalvo, kept the image of California as an island alive on their maps. The issue was finally laid to rest by the expeditions of Juan Bautista de Anza (1774-1776). 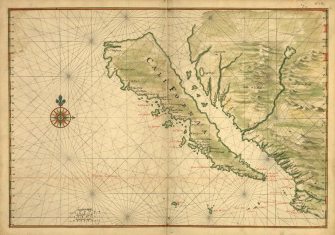 This map by Johannes Vingboons (1639) taken from this page at the Library of Congress.

As Rectangular as Kansas: the Land of Oz

Is the Land of Oz located on a retrograde planet?