No, this is not an illustrated guide to basket weaving. This is indeed a map. Or to be precise, a cartogram: statistical data presented in a geographic context. Even if in this case that geographic context is very abstract.

This circle graph shows the import and export of electricity between 35 European countries for May 2014. With its overlapping and interconnecting strands of different colours and varying width, the circle looks like a beautiful mess, not really like a practical source of information. But there is system to the chaos. And the map’s interactivity helps untangle the many layers of information. 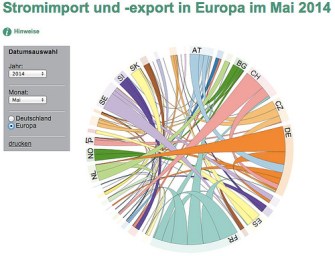 The countries are lined up alphabetically along the outer edge of the circle, with less than half of the wedges big enough to show a two-letter abbreviation.

Hover over any of the 35 edges to isolate a particular country’s cross-border flow of electricity, shown as strands connecting it to other countries. If a strand’s colour matches the country of origin, that country is the net importer, and vice versa. The varying width of each strand at origin and destination is a further indication of the size of the export and import of electrictity.

For the exact figure, hover over each strand individually and a pop-up box tells you just how many gigawatts and terawatts flow either way. Hover over the edge, and you’ll get the total export figure for each country. 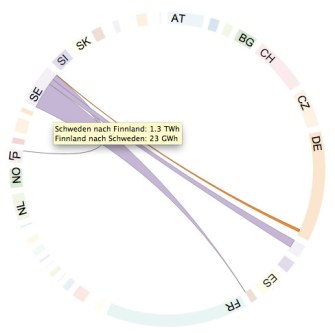 To pick your dataset, go to the drop-down menu on the left. It lets you choose any month between January 2011 and May 2014 (the most recent month for which data is available). You can opt for a Europe-wide graph, or isolate the flow of electricity in and out of Germany.

This map cleverly combines abstraction and interaction, managing to present a wide range of ‘boring’ data in an easily graspable context. The colourfulness and interactivity make you want to learn more about the European energy landscape than you ever considered – if you even considered it at all.

Take the fascinating world of German electricity exports and imports, for instance. 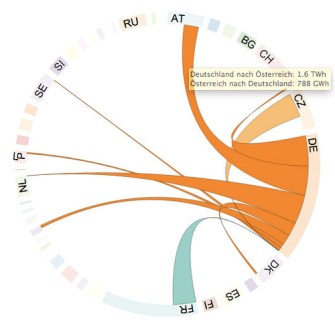 In January 2011, Germany is the biggest exporter of electricity in Europe, with a total of 6.5 TWh. One terawatt hour (TWh), the equivalent of 1 billion kilowatt hour (kWh), represents enough energy to power 100,000 homes for a year. Germany is a net exporter to 6 of its neighbours, pumping out 1.6 TWh each to Switzerland, Austria and the Netherlands. Smaller amounts go to Denmark, Luxembourg, Poland and Sweden. Of all those countries, only Austria sends back a significant amount of electricity (788 Gwh). Germany is a net importer from two further neighbours: it gets 1.3 TWh from the Czech Republic and 1.2 TWh from France.

By May 2014, the situation has changed dramatically. 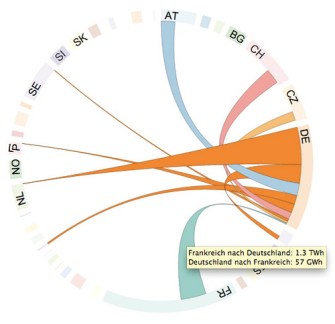 Germany’s electricity exports have dropped to 5.5 TWh, and the country has been overtaken as the continent’s main electricity exporter by France (its figures rising from 4.9 to 6.6 TWh). Exports to the Netherlands have gone up (to 1.9 TWh), but the two other main markets have collapsed. In fact, Switzerland and Austria are now net exporters of electricity to Germany (if not by much). France and the Czech Republic also export more than they get back from Germany. Denmark, Luxembourg, Poland and Sweden still buy relatively small quantities of German Strom.

All of which leads us to a few questions:

* Are the politics of electricity at all similar to those of the gas and petrol markets? If so, how do the top dogs – Germany and France – make their power felt on Europe’s electricity market?

* How has France overtaken Germany as the continent’s main electricity exporter? Or is pole position a seasonal effect, evening out over the year?

* Russia, a giant on the gas and petrol markets, is a dwarf on the electricity market. A few other countries, though mid-sized at best, are much more important players, for example the Swiss, the Czech and the Austrians, all exporting around 2 TWh (at least in May 2014).

* Countries seem to have electricity relations only with their neighbours. Doesn’t electricity ‘carry’ over longer distances?

We’ll leave the rest of the map for you to explore. Have fun!

The atmosphere’s habitable zone is so small, several mountain ranges extend beyond it.
Up Next

Environmental Fashion? Your Next Pair of Jeans Might Be Made of Recycled Ocean Plastic.

A start up in New York called Bionic Yarn makes an innovative new fabric out of recycled ocean plastic. With Pharrell Williams and G-Star RAW on board, Bionic Yarn wants to start a environmentally-responsible fashion revolution.