As any Bible reader, numerologist or Iron Maiden fan worth their salt knows, 666 is the Number of the Beast. It says so in Revelation 13:17-18, in wording enigmatic enough to keep conspiracy theologians guessing as to the Beast’s true identity: Nero, the Pope, Mussolini, Obama?

And by stupid perseverance – I’ve kept numbering blog entries ever since #1 back in September 2006 – 666 is also the Number of this Post.

For once, the serial number isn’t just incidental context. A number this special has to be the starting point of a blog post of its own. But in what cartographical setting? The Beast, whether it be the Antichrist or the Devil himself, clearly belongs in hell. So… welcome to New Jersey. 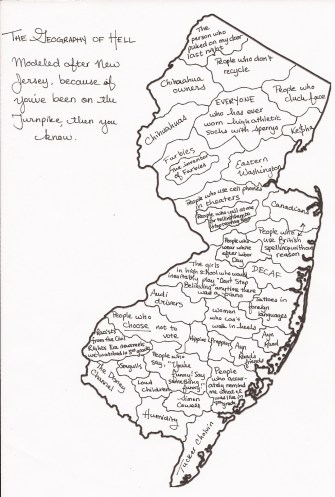 The unknown author of this fine map improves on Sartre’s dictum that ‘hell is other people’ by presuming that everybody who has ever annoyed him/her lives in the Garden State, from the person who puked on my door last night over people who wear white after Labor Day via hippies and preppies to the girls in high school who would inevitably play ‘Don’t Stop Believing’ anytime there was a piano, not to forget Simon Cowell. And even seagulls, poor things.

But of course hell isn’t in New Jersey! It’s actually in Norway (and yes, it does freeze over). There’s another one on Grand Cayman Island (that one doesn’t) and a third one inMichigan. To even things out, there also is a Paradise, Michigan. Apparently, a round trip between both is exactly… 666 miles. 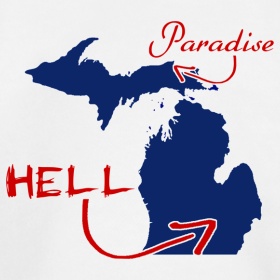 If Dante is to be believed, hell exists underneath Jerusalem, and is a literal Underworld: an inverted cone created by the Fall of Satan, descending into ever increasing agony to reach Hell Central at Earth’s core, where the Devil is held in bondage. The Italian poet’s Divina Commedia describes a journey from hell through purgatory to heaven – each divided into nine levels.

At the risk of doing the ornate architecture of Dante’s Inferno an injustice, here’s a brief description:

In the Vestibule, or hell’s antechamber, Dante finds the indifferent: those who, when faced with the choice between good and evil, did nothing. Hello, Pontius Pilate!

After crossing hell’s border river the Acheron on Charon’s ferry, we enter the First Circle, or Limbo: home to virtuous pagans like Virgil and Avicenna. Unlike all on lower levels, they have not actively sinned. It’s rather pleasant, with green fields and a nice castle. But of course it’s not Heaven: only for Christians!

The other circles are bunched in three main categories of increasing wickedness: Incontinence (2 to 5), Violence (7) and Fraud (8 and 9).

The Second Circle houses the Lustful. Look here for Helen of Troy, Cleopatra, Tristan and others led astray by their carnal desires. In the Third Circle, the Gluttonous suffer for their overindulgence in food and drink. In the Fourth, the Avaricious (i.e. greedy) and Prodigal (i.e. wasteful), while including many cardinals and popes, form an amorphous, unrecognisable mass of people, guarded by Pluto, the pagan god of the Underworld. The Fifth Circle is bounded by another famous underworld river, the Styx. In it, the Wrathful fight each other. 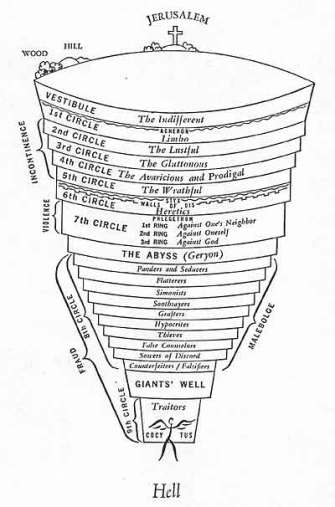 Up til now, the sins punished were passive ones. All lower circles are contained within the walls of the Underworld city of Dis. Beyond here lie punishments for active sins. Heretics populate the Sixth Circle. They include the philosopher Epicurus, and the epicurean Emperor Frederick II Hohenstaufen. Guarded by a Minotaur, the Seventh Circle is divided in three rings, each containing a separate class of violent sinners: against their neighbours, against themselves (suicides e.a.) and against God (blasphemers, sodomites and usurers).

To reach the last two circles, Dante crosses the Abyss on the back of Geryon, a three-natured monster. The Eighth Circle is divided in 10 ‘evil pockets’ (Malebolge), each successive one for a worse type of fraudster: Panderers and Seducers, Flatterers, Simonists (i.e. those who sell or buy church offices; Dante includes three Popes), Soothsayers, Grafters (i.e. corrupt politicians), Hypocrites, Thieves, False Counselors (Ulysses is here for that trick he pulled with the Trojan Horse), Sources of Discord (Muhammad’s presence here may indicate Dante’s view of Islam as heretical Christianity)and Counterfeiters and Falsifiers.

Guarded by mythical Giants, the Ninth Circle holds the Traitors – the worst kind of sinners – stuck in the frozen lake called Cocytus. Dante then encounters the worst traitor of all: Satan, a winged monster with three heads, chewing on other traitors: Brutus and Cassius, the assassins of Julius Caesar, and Judas, who betrayed Jesus. Crawling over Satan, Dante escapes to the other side of the world, where the ground displaced by Satan’s fall has created a nine-circled hill – Purgatory.

Phew, what a long slog. And that’s just the briefest of summaries. Attention spans aren’t what they used to be. My guess is that nobody with a smartphone will ever be able to read the Divina Commedia to the finish. Then again, maybe reading is overrated as a means to an end. What if you could game Dante’s masterpiece? It already has all those levels. This map has the right idea: a pixel-poor, colour-rich version of the Inferno, looking like each Circle is a game stage to be played through. What Circle of Hell would Mario be stuck at, I wonder? 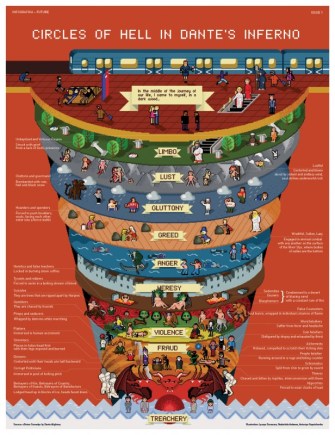 Dante’s rich imagination has impressed itself on our concept of hell, but there are many other such maps, some based on the imagination of other literary greats, like John Milton, who described the Awful Place in his Paradise Lost – famous quotes: “The mind is its own place, and in itself can make a heaven of hell, a hell of heaven.” and: “Better to reign in Hell, than to serve in Heaven.”

Milton’s infernal topography, though less well known than Dante’s, contains at least one familiar-sounding place: Pandemonium, the Capital of Hell.

But concepts of hell is not limited to Abrahamic theology. The English word itself predates the great monotheisms, and in pagan times denoted not so much the deplorable fate of wrongdoers, but a more morally neutral destination of the dead in general. This map shows Das Reich der Hel (loosely translatable as ‘The Empire of Hell’ – although the contemporary German word is Hölle). It attempts to show that, for pagan Germans, Hell was located somewhere in the North Sea. 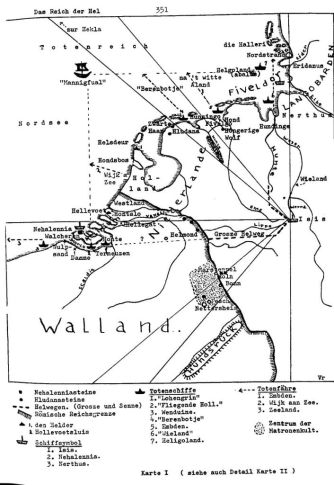 As far as I can decipher the map, it posits a central point of Isis worship somewhere in in the Teutoburger Forest, close to the source of several rivers (the Lippe and Ems, among others), and from there several corridors towards the North Sea, often via places with names that seem to refer to the Underworld, most notably Helmond, Hellegat, Hellevoet along the Grosse Helweg (‘Great Hell Way’) due west from the Isis shrine. Others further north include Helsdeur, Helgoland and Halleri.

Several ship symbols on the coast show where ferries would take the dead to hell. The ship identified as Mannigfual is the mythological ship of the giants, so huge that its sides had to be soaped in to pass through the Dover Straits, and even then it just managed to scrape through (accounting for the whiteness of the cliffs on either side).

But where exactly is hell? The legend just above Mannigfual reads Totenreich (‘Empire of the Dead’). Was hell just anywhere in (or under) the North Sea? Or was it perhaps at Hekla, outside the map? Hekla is a fearsome Icelandic volcano, which has erupted over a dozen times over the last thousand years. It was considered the gateway to hell – not a giant leap of the imagination about a mountain that breathes fire and spews sulphur. Yeah, that does sound like New Jersey.

Burn A Dollar and Find Out Who Your Friends Are

I contributed to Bang for Your Buck over at The Morning News with how to best invest a dollar. They needed something a little more succinct so I’m including my […]