Political cartooning, curious cartography and questionable punning all rolled into one: what’s not to love about an artwork like Crimea River? The photorealist painting shows a pouting Putin, shedding a crocodile tear in the shape of Crimea, the Ukrainian region illegally annexed by Russia last March. 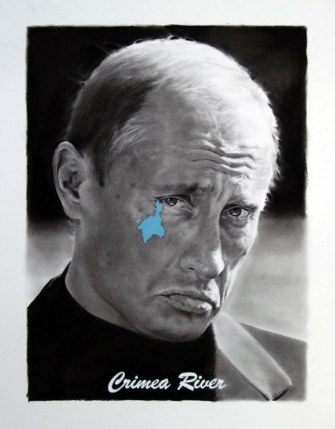 For those unfamiliar with the idiom, cry me a river is a common response to somebody whining about something they’re powerless to stop (like Ukraine, unable to prevent Russia taking over its territory), or unjustified to complain about (like the US, which itself illegally invaded Iraq in 2003).

It’s one of the works by the L.A.-based artist Eric Yahnker now on show at the Paradise Row Gallery in London. The exhibit is called Sticks and Drones. Another work at the gallery, consisting of wooden cutouts of Texas draped in cock-and-ball fishnet thongs, is called Don’t Mesh with Texas. 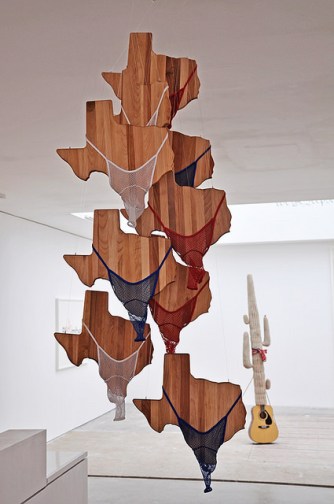 Don’t Mesh with Texas, by Eric Yahnker. Taken here from the artist’s website.

One sees where the criticism of Yahnker’s work as one-linerism comes from. Not that this blog objects to awful, geography-based puns – quite the contrary. In fact, here are a few suggestions for Mr. Yahnker:

The artist of course didn’t invent the Crimea River meme [1]. It’s been popping up online ever since the Ukrainian region was taken over by Russia. It’s been the punch line of a knock-knock joke… 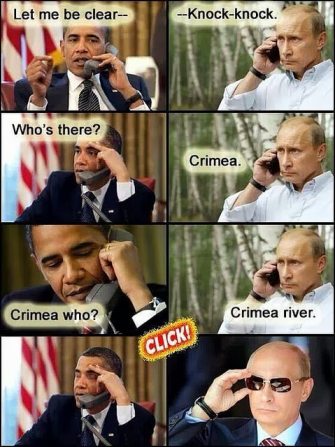 …  and is available on t-shirts. 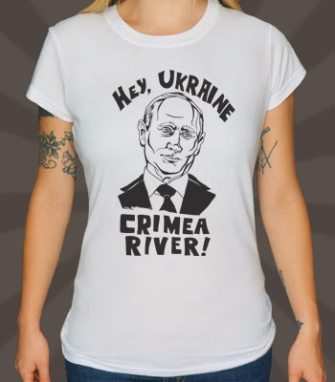 My uncle went Yalta and all I got was this lousy t-shirt. Image taken here from Six Dollar Shirts.

It’s so widespread that even the anti-message has gone viral. 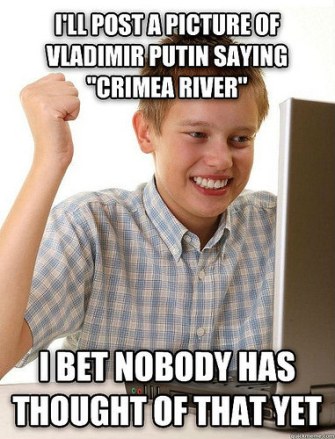 So this is where original ideas on the internet come from. Image taken here from Live Meme.

This particular image – the pouting Putin – in combination with the ubiquitous pun finds its origin with that font of geopolitical analysis, I Can Has Cheezburger? 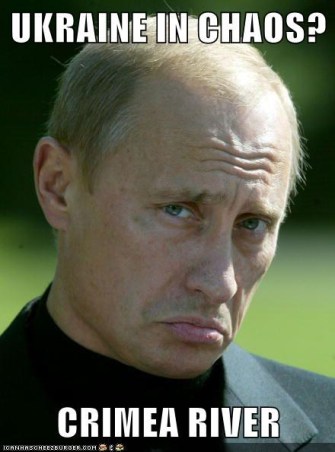 I wonder if he has a funny cat. Image taken here from I Can Has Cheezburger?

Mr. Yahnker’s artful adaptation consists of adding that Crimea-shaped tear. Which is an interesting comment on the strength of the region’s cartographic persona. Crimea is instantly recognisable, even out of its immediate geographic context.

For a reason, look no further than its most popular tourist attraction – its beaches. Being a peninsula just two narrow land bridges short of an island, Crimea’s map appearance is defined almost entirely by its coastline. So even though the diamond-shaped territory [2]  changes hands often, its shape is as iconic as that of island nations like Great Britain, Madagascar or Japan.

Iconic meaning: fixed and instantly recognisable. Although the conflict in Ukraine has now moved on to the east of the country, where it has claimed a lot more casualties, and seems on the brink of a much wider war, almost nobody would recognise a blind map of the so-called People’s Republic of Donetsk. 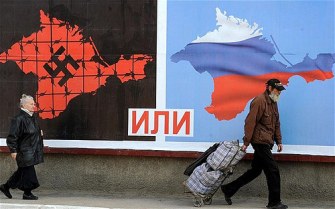 The map as propaganda: the choice laid out to Crimeans before the referendum legitimising their secession from Ukraine. Image taken here from the Daily Telegraph.

Crimea, on the other hand, is so recognisable that its very shape can be used as communicative tool. One of the enduring images of the run-up to the referendum that led to the region’s secession from Ukraine was a propaganda poster showing two Crimeas: one in grim black and red, the map of the peninsula overlaid with barbed wire and a swastika, representing the fascist threat emanating from the new government in Kiev; the other showing Crimea perked up by the cheerful Russian tricolour, against an optimistically blue background. The only word needed on the poster was или (‘or’), presenting Crimeans with a clear choice between the armies of darkness and the forces of light.

Which makes one think: Does the newsworthiness of a conflict have any relation to the cartographic attractiveness of the region involved (not to mention its ‘punnability’)? In spite of the heavier toll and the greater geopolitical risk of the current conflict in the Donetsk area, it is unlikely to spark an internet meme like Crimea River, or an artwork by Mr. Yahnker…

Many thanks to Jeremy Hoogmartens, who spotted this work in the Paradise Row Gallery.

[1] Although there are rivers in Crimea, none is called the Crimea River. The longest is the Salhir River, 232 km (144 mi) from source to estuary. ↩

Will Starbucks’ Free Tuition Perk Catch on with Other Employers?

Starbucks has partnered with Arizona State University to provide thousands of its employees free college educations through the latter’s online program. The unusual perk is expected to improve the quality of Starbucks’ workforce. Other companies would be wise to emulate the coffee giant.