Pakistan was born on the top deck of a London bus. Or on a walk along the Thames – different witnesses, different stories. What’s more certain, is the time: the early 1930s; and the place where that place-name was first committed to paper: a modest boarding house at 3 Humberstone Road [1] in Cambridge.

That was the correspondence address on Chaudhari Rahmat Ali’s first and best-known pamphlet. In Now or Never: Are We to Live or Perish Forever?, he first commits that fateful toponym to paper. The neologism, entirely of his own making, becomes a runaway success, and the basis for a‘Pakistan Movement’.

If Rahmat Ali [2] himself is now largely forgotten, it is perhaps because of the querulant passion of the purist with which he propagated his plan for the post-independence future of Muslims in British India. His vision of a commonwealth of faith-based homelands, which he called Dinia, now has the ring of fantastic fiction to it.

As so often with purists, he ended up the sole defender of his ideas, even as the name ‘Pakistan’ became the rallying cry for a slightly different cause. Broke and alone, Rahmat Ali died in Cambridge on 3 February 1951, during an influenza epidemic.

His obituary in the Emmanuel College Magazine later that year reads: “[T]his obscure and single-handed undergraduate of Emmanuel College […] has influenced world events, and may yet influence the future, more than falls to the lot of most men […] By mere accident, we may have made the College a place of pilgrimage to the faithful or the curious, and have added another name to be misunderstood by the guide books. This College was the College of the founder of Pakistan – If a guide were to be overheard in such a story it would be a much truer one than many which are heard today in our Front Court about John Harvard [3]”.

Rahmat Ali was born in 1895 in the Punjabi town of Balachaur, graduated from Islamia College in Lahore in 1918 before teaching at that city’s Aitchison College, moving to Punjab University to study law and then to Cambridge to join Emmanuel College. He came from a devout family: his father only gave him permission to go to England if he promised he would refrain from dancing. Throughout his life, Rahmat Ali performed the five daily prayers required of Muslims.

In 1933, he obtained his BA and in 1940 his MA from Cambridge. Rahmat Ali was called to the bar from Middle Temple in London in 1943. But the passionate young man’s ambition lay not with the law, but with nation-building. As the aforementioned obituary would later note, “the subject which he had […] made his life” was “the defence of Islam against Hindu nationalism”.

In his pamphlets, Rahmat Ali waged a “grim and fateful struggle against political crucifixion and national annihilation” on behalf of his co-religionists. He was convinced that “Our brave but voiceless nation [was] being sacrificed on the altar of Hindu Nationalism not only by the non-Muslims, but also, to their lasting shame, by our own so-called leaders with a reckless disregard of our protests and in utter contempt of the warnings of history”.

By which he referred to an agreement at the so-called Round Table Conference, where campaigners against British rule in India had agreed to an All-India Federation. This would have maintained the territorial integrity of the British Raj post independence, but – Rahmat Ali feared – would fatally minoritise Muslims in a Hindu-dominated state.

Being a devout Muslim, he sought inspiration in early Islamic history. Rahmat Ali believed that, after the example of the Prophet Muhammad’s success in uniting various Arab tribes under the banner of Islam, Muslim Indians had to reform and regroup to become an independent entity within India – to adopt their religion as their nationality, irrespective of the multitude of their languages and cultures.

In Now or Never, which was published on 28 January 1933, Rahmat Ali proposed a separate territorial entity for the Indian subcontinent’s Muslim population. Originally spelled Pakstan, the name for that entity has a double meaning. Literally, it is the ‘Land of the Pure’ (‘pak’ in both Persian and Urdu). It is also an acronym for the 5 majority-Muslim areas that it would comprise: P for Punjab, A for the North-West Frontier Province (often called Afghania), K for Kashmir, S for Sindh, and -tan from Baluchistan. The -i- was later interposed to facilitate pronunciation.

In the same year, Rahmat Ali also founded the Pakistan National Movement. But the high point of this revolutionary career was the coining of the future country’s name. Pakistan became the rallying cry of other, more successful groups – most notably the Muslim League of Ali Jinnah, who would lead Pakistan to independence and is still revered as the country’s Quaid-i-Azam (‘Great Leader’).

In contrast, the Pakistan National Movement was a one-man operation: Rahmat Ali continued to draft and meticulously redraft his pamphlets, distributing them from a string of Cambridge boarding houses to intellectuals and newspapers in India and England, often quarrelling with correspondents and eventually falling out with his landladies and secretary.

Rahmat Ali had a great sense of honour and duty, but was also quarrelsome and paranoid – he was always afraid of being robbed or murdered, and was convinced someone had tried to poison him while visiting Pakistan. He also believed he possessed healing powers, and could cure chickenpox by reciting a few lines of the Quran over the patient.

The coiner of Pakistan had few good things to say about its founding, which he called the ‘Great Betrayal’. Its founder Jinnah he called Quisling-e-Azam [4]. No doubt Rahmat Ali was traumatised by the violence and bloodshed at Partition. In a darkly ironic twist of fate, he also lost his ancestral lands and the associated income in the chaos that gave birth to Pakistan. And he was bitter that he wasn’t acknowledged as the progenitor of the country’s name. Quite the contrary: in April 1948, Rahmat Ali returned home to Pakistan, but Prime Minister Liaqat Ali Khan expelled him from the country that bore his name.

But mainly, Rahmat Ali opposed Pakistan as a twisted, reduced version of his maximalist dream (even though at its inception it also included what is now Bangladesh, then an exclaved East Pakistan). In his book Pakistan: the Fatherland of the Pak Nation, he outlined (and mapped) other Muslim-majority areas in the subcontinent as candidates for self-determination. Not content with fathering Pakistan, he also provided these with names of his own coinage. 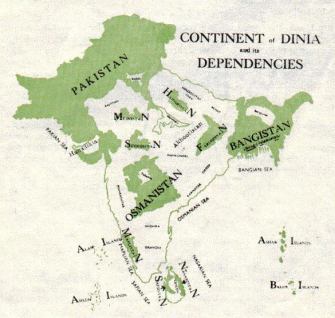 These Muslim islands in the Hindu sea included Bangistan (almost contiguous with what was later to become Bangladesh), Osmanistan (in the Deccan) and smaller autonomous Muslim homelands which he named Haideristan, Siddiqistan, Faruqistan, Muinistan, Maplistan, Safiistan and Nasaristan (the latter two on Sri Lanka), among others.

Even the oceans were to be renamed: the Bay of Bengal was to become the Bangian Sea, that part of the Arabian Sea that laps the Pakistani coast was to be called the Pakian Sea and the Laccadive Sea the Safian Sea.

The map also shows how Rahmat Ali envisioned Pakistan’s borders: not only including all of Kashmir, but also, as great and ancient centres of Muslim civilisation, Delhi and Agra.

The overarching federation Rahmat Ali called Pakasia, but more often Dinia – again, a name with a double meaning: not just a reconfiguration of the word India, but also a reference to the Arab concept of Deen, ‘religion’.

Rahmat Ali conceived of this Muslim/non-Muslim configuration not as a Western-style federation of totally independent states, but saw it through the prism of the Muslim millet system, whereby each confessional community would have legal autonomy for matters pertaining to personal law (i.e. Sharia courts for Muslims, and parallel systems for Hindus, Christians, Sikhs, etc.)

Ironically, the millet system implies a single, overarching political system for the entire subcontinent for all matters transcending the personal and/or spiritual. If Rahmat Ali’s entire message had been heard instead of just that single word, he might not have been the obscure inventor of Pakistan, but the celebrated father of an All-India Federation, with religious autonomy for Muslims, Hindus and other faiths.

But no. Rahmat Ali died estranged from all his friends but one, the elusive Dr. Ezzat Abu Hindia of the Royal Geographic Society (India), who reportedly was with him when he passed away.

He was buried at Newmarket Road cemetery in Cambridge, at the expense of Emmanuel College; perhaps as a tribute to its spiritual father, or in recognition of its debt to the man, the government of Pakistan later reimbursed the College for its expenses.

More information on Chaudhary Rahmat Ali in this article from the Pakistani paper The News on Sunday, and this page of the Shelley Family website. Image taken here from Wikipedia.

[1] The house is the object of a small but steady trickle of Pakistani pilgrims, curious to see the address associated with the pamphlet, which became known as the Pakistan Declaration. Humberstone Road has another claim to fame. Not only is it the birthplace of a nation, it also has the shortest double yellow (no parking) lines in the UK – just over a foot long.

[2] Chaudhari, also spelled in various other ways, including Chaudri, Chowdhury, and Caudhari, is a hereditary honorific, now also used as a common surname, first conferred by the Delhi Sultanate on local nobility required to collect taxes and allowed to retain a quarter of the revenue instead of the usual 10%. (The name literally means ‘holder of [a] four[th]’).

[3] John Harvard (1607-1638) is both one of the most famous and one of the most obscure graduates of Emmanuel College. His stained-glass portrait in Emmanuel’s chapel is a longer-haired likeness of Milton. He is famous only for giving his name to the eponymous university in America – and not, as often erroneously reported, by founding it, but by bequeathing it with his library of 400 books, and half of his estate: £1,700, back then a considerable sum, and one that allowed the college to survive.

[4] After the Norwegian Nazi leader Quisling, whose name became a byword for traitor.

A new study says the reason cave paintings are in such remote caverns was the artists’ search for transcendence.
Up Next

Can We Learn to See How Artists See?