Hippiedom was dealt a devastating double blow in 1979. The Soviet invasion of Afghanistan and the Islamist revolution in Iran closed off large segments of the so-called Hippie Trail. Bereft of its major route of pilgrimage, the once-dominant counterculture of the West fizzled out, its remnants ridiculed by a new wave of youth rebellions replacing it.

Using older trade routes as a template, the Hippie Trail had been the favoured grand tour for members of the beat and hippie subculture from the 1950s onwards. It consisted of several starting points in Europe (often London, Athens or Istanbul) and a handful of termini in the Indian subcontinent (Goa, Delhi, Kathmandu) or beyond (Bangkok). From Istanbul, a northern route branched out via Tehran, Kabul and Lahore into India, a southern route passed through Syria, Jordan, Iraq, Iran and southern Pakistan.

In 1957, the pioneering Indiaman bus made the first of many round trips between London and Calcutta (image taken here from the AEC Gazette, as quoted by The Hippie Trail)

A network of hostels, cafes and shops frequented by like-minded travellers was essential to keep the trip as cheap and as ‘real’ as possible. That network was irreparably breached in 1979.

The hippie philosophy that embraces peace, love and an understanding of various types of hallucinogenics hasn’t completely gone out of fashion. Nor has its taste for the exotic. But for today’s bohemians, it’s all about the destination, not the journey. The sensual and the spiritual dimensions of destinations like Goa, Thailand or Bali are just a plane ride away.

What sounds exotic now is that the Hippie Trail, a.k.a. the Overland, once existed at all: given the current state of the world, it’s hard to imagine a constant stream of hedonistic twentysomethings hitching rides from London to Kathmandu, scoring dope in Tehran and Kabul, and generally exhibiting lascivious behaviour with the wild abandon that gets you in trouble with the locals faster than you can say ‘angry flash mob’. 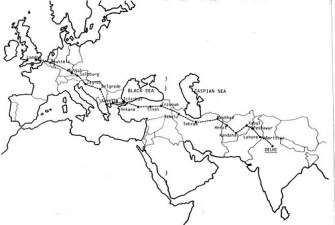 London to Delhi via Istanbul and Tehran. With time to spare for a short walk in the Hindu Kush. (taken here from The Hippie Trail)

Attitudes have hardened, with permissiveness and tolerance towards alternative lifestyles increasingly rare, in East and West. To quote The Big Lebowski, a film about the frustrations of a group of Sixties holdouts marooned in the Nineties: “Your revolution is over, Mr. Lebowski! The bums lost!”

Even more of a problem is the fact that at no point since 1979 has the entire trail been safe to travel.Turkey, Syria, Iraq, Iran, Afghanistan, Pakistan and India have all been suffering from varying degrees of violence, from simmering rebellions through civil strife to outright war.

Add to that the deleterious effects of cannabis on memory, and these reasons might explain why, to quote Nick Danforth, “[i]t’s proved surprisingly hard to find good maps of the hippie trail, which I’m sure must have existed”. On The Afternoon Map (his excellent cartography blog), he offers a few options, some of which we reproduce here. 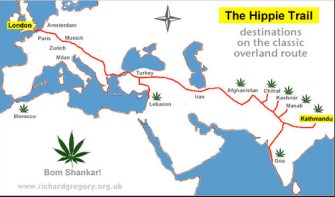 His post also quotes from Head East!, a 1973 travel guide covering the Istanbul to Kathmandu part of the Hippie Trail. For insight into the strange lost world travelled by these hippies, below are some quotes from the book (which is partially reproduced in Mr. Danforth’s post).

“People of the East, for the most part, have a much better perspective on life, time, people, drugs and living in general than do those of us who come from the West.”

“You might think that backsheeshing the policeman who finds your dope stash is not going to work. But if you’re cool, it does.”

“When you ‘split’ from this ‘civilized’ and constrained Western thought which has not taught you to seize the time, to live each moment, to let yourself feel the real world going on around you and despite you, you will surely draw your first real breath of life.”

“The cost of living [in Europe] is almost as high as it is in the States, so every day spent in Europe means about five lost in the East.” 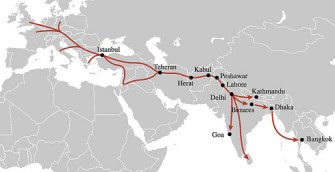 “You’ll be following in the footprints of Marco Polo on what is now known as the ‘pot trail’ and whether you like it or not you are going to see a lot of good, cheap dope around. And it’s going to get better and cheaper as you travel. Just one word of warning, be cool and careful, especially in Iran and turkey. Here the police are heavy and the jails are terrible. In very country of the East except Nepal and parts of India dope is illegal. But, east of Iran it is so widely used that there is little or no law enforcement by the authorities. So don’t be paranoid, just cool!”

On crossing into Turkey:

“Beware of the head customs officer at the Greco/Turkish border. He loves to throw a black rubber snake into the laps of unsuspecting females.”

“As soon as you get a room [in Istanbul], locate the Pudding Shop. The food is overpriced; it’s the bulletin board you want to see, not the menu. On [it] are notices for rides and riders wanted, overland buses, [etc.] Put up a notice if you are looking for a ride East.” 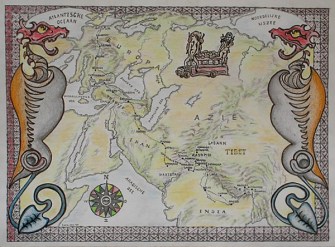 “Turkish food is good and cheap. Stuff yourself. The food is going to get progressively worse as you go East – or at least until you reach Kabul.”

On hotels in Tabriz:

“A good hotel is right on the main circle – the bus stops in front of it – but the name eludes us. (At least we are honest).”

“The people of Islam, or Moslems, believe that they are the ‘chosen people’ of Allah (God). In keeping with their tenets and customs, the women are considered the property of their men-folk. This chattel is subject to prearranged marriages and other such non-liberated customs.”

“The highway [into Teheran] is fairly narrow and with the shoulder a four foot drop and you doing upwards of 90 kms/hr., if you go off for any reason you will surely be injured. V.W. buses beware! Your center of gravity is very high, so carry your load lower and don’t make any high-speed sharp turns or swerves.”

On the modernity of Tehran:

“Tehran is a gigantic new city with all the traffic congestion and high-rises of the West. The driving in the city is absolutely absurd. The people of the city are very much into becoming modernized, consequently they are rather standoffisch and at times can be very uptight.”

On homes away from home:

“The manager [of the Amir Kabir hotel in Teheran] is a very cantankerous guy, but he appreciates freaks.”

On crossing into Pakistan:

“In Tai-bad [the first Pakistani town past the border] there is a definite change. Things get even more wild-looking and pushed back in time. This border town is funky.”

On crossing into Afghanistan:

“As you are leaving the border station area [at Islam Qala] the guard will probably try to sell you some hash. Don’t get paranoid; he is only trying to make a buck. (However, dope is illegal in Afghanistan). If you can’t wait until Herat where the hash will be better and cheaper, buy only enough for a couple of joints and don’t pay the guard more than 1/3 of what he asks.”

On buying camels (not the cigarettes):

“Three German guys, thinking it would be a romantic way of travelling, bought four camels, three to ride and one pack camel. The first night they camped, they hobbled the camels, so they wouldn’t wander during the night. In the morning the camels were gone. They had dragged themselves 20 miles, through the desert with their legs tied, back to their former Afghani owner. It turned out that it wasn’t the first time that these loyal creatures had returned to their master; he must have sold them many times.”

On ladylike behaviour in Afghanistan:

“Ladies, take special notice. Afghanistan is a heavy duty male chauvinist trip, so try to remember what your dear old Grandmother said about acting like a lady. Don’t go wandering the back streets at night unescorted. If you are invited to an Afghan home, go only if you are escorted by one or two western males, preferably with one of them claiming he is your husband or brother. […] Above all NEVER call an Afghan a pig no matter how much he might piss you off.”

Why tough hippies are yellow hippies:

“DO NOT DRINK THE WATER in Afghanistan unless it has been chemically purified or boiled. You’ll meet some ‘tough’ hippies who will say that they drink the water everywhere. Six weeks later, in Kathmandu, you’ll meet the same hippies frantically swallowing iodide tablets rapidly turning a rich shade of yellow, wondering where and how they got infectious hepatitis.”

“Small brass water pipes at 15-20 Afs. and bigger hubbly-bubblies are better and cheaper here than in Kabul. Don’t buy shirts in Herat. Wait until Kandahar […] the shirt capital of Afghanistan.”

How to collect hashish in Herat:

“Herat features a pancake style hashish. It is hand pressed (often with a little water added), locally grown and unusually grey-green to grey-brown in color. […] A more romantic – but slightly less practical – method for collecting the pollen is to run in a loincloth through the fields and then scrape the pollen from your body and press it, preferably against the warm sweating body of a fellow field nymph or satyr.”

What constitutes exotic cuisine in Kabul:

“There are also several German restaurants in Kabul: Siggi’s is the cheapest at 30 Afgs. for a dinner.”

Jean Harlow in the bazaar:

“The Nixon Bazaar (Old Clothes market) with outrageous thirties to fifties Western clothes is in the main bazaar behind the Mosque. Such items as a 1930’s flesh-colored Jean Harlow dress are occasionally up for grabs.”

On where to get stoned:

“Things used to be really loose [in Kabul] but ‘the times they are a changing’. […] Get stoned, but don’t make a public affair of it. The purchasing of large amounts of dope in Kabul is not advisable for two reasons: it’s more expensive and there is much more heat.”

People around the world, mostly Generation Z, are obsessed with the look and feel of gothic, elitist universities. Why?
Up Next

BEIJING – James Palmer, a journalist from Beijing, reports about the ongoing plight of the disabled in China. His article deserves attention: Practical and communist “95% of orphans in China […]