Dear Strange Maps, This really is the strangest, or perhaps most curious, map I’ve ever seen:

Spam is almost as smart as chimpanzees these days. It gets harder and harder to tell messages sent by carbon-based life-forms from emails tailored to your interests by robots spying on your keystrokes.

This one, in all its brevity, was so perfectly alluring that I doubted whether it was sent by Man or Machine. I clicked before I made up my mind. After all: If you never live dangerously, why live at all?

What I saw next was not promising.

Exactly the kind of gibberish you’d expect just before your screen goes black and/or The Joker’s maniacal laugh erupts from your speakers. 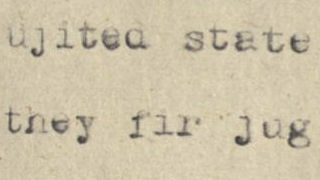 No such bad luck. The mysterious message appeared to be produced on an old-fashioned typewriter, with its telltale smudges, half-impressions and other imperfections. It was preceded by:

a simple but curious map of our ujited states…

If this was some kind of puzzle, was the typo in united a clue? Would the letters make any sense if processed by an anagram generator?

Not even Dan Brown’s favourite cryptographer Robert Langdon (anagram: Garbled Or Not) could make heads or tails of any of those.

A Google search yielded only one, very literal ‘fir jug’, a vintage ’50s model in excellent condition, recently sold on eBay. And besides it being the zip code for Seaman, a village in southern Ohio, there’s remarkably little to say about the number sequence 45679.

A search for the entire quote does not yield any results. Which perhaps explains why it was written on a type-writer in the first place. If you want to be invisible in these digital times, go analog.

Fortunately, the sender of the cryptic message was good enough to include another link, this one solving the puzzle.

This indeed is immediately recognisable as a map of the ‘Lower 48’, i.e. the US minus the two non-contiguous states, Hawaii and Alaska.

Even in its most rudimentary state, we spot the few unmistakable attributes that even a bunch of Las Vegas school kids blind-drawing a map of the United States get right: the straight northern border, except for the southward indent of the Great Lakes, followed by the northeasterly jut of Maine. To the south, the twin extremities of Florida and the southern tip of Texas. The eastern coastline slopes westward, north to south, while the western coast bulges out in the middle. Just like the real thing. Or at least a simplified version of it.

By now, you will have guessed how that line of gibberish relates to the map: type in those characters on a keyboard, and you touch all of the keys that make up this map; no need for that second e, even. Was that one added to throw puzzle-solvers off the scent?

In any case, that puzzle is only solvable if you have a qwerty keyboard. Although the most prevalent layout, there are other keyboard standards out there, most notably azerty used by French-speaking countries, and quertz, prevalent in German-speaking and Eastern European countries. 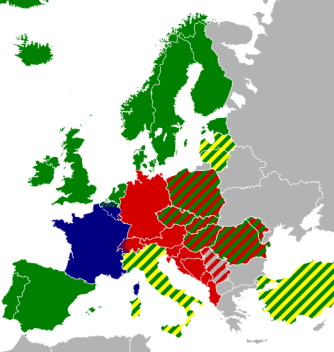 Perhaps those countries have their own maps hidden in their keyboards. If so, please direct your email to strangemaps@gmail.com. And try not to sound too spammy!

Many thanks to Nick Danforth, for sending in both maps. More on the whole qwerty and azerty thing (including the above map) on this Wikipedia page.

A major advance in the use of microscopes for scientific investigation allows scientists to watch the brain create memories.