The sea is only flat and level at the surface. Its waves hide the hills and valleys of an unseen landscape. The topography of those submarine undulations determines how life in the oceans is distributed: some marine species thrive at shallow depths, others prefer the ocean‘s deeper, darker reaches.

The deepest sea creatures have evolved to resist huge pressure and intense cold, a process that did their appearance no favours. They are among the weirdest-looking animals on the planet [1]. Because they live at such unreachable depths, new deep sea species are being discovered all the time [2].

The creatures inhabiting the relatively shallow North Sea are a bit more mundane, but their habitat too is determined by the elevations and depressions of the local sea floor – so much so in fact, that it takes two maps to adequately demonstrate the distribution of the local bivalves [3].

The main feature determining the distribution of bivalve species in the North Sea is the Dogger Bank [4], a giant sand bank in the middle of the North Sea slightly bigger than the US state of Connecticut [5]. At depths varying from 15 to 35 metres (app. 50 to 120 ft), it is about 20 metres (65 ft) shallower than the surrounding area. 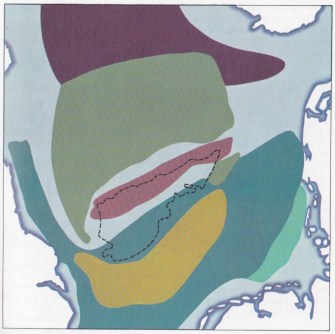 While this map provides insight into the general distribution of the different bivalve groups, it doesn’t adequately show the – literally – underlying reasons for their geography. Nor does it make clear that some of these groups co-occur, albeit at different depths.

The second map adds the crucial third dimension to the first map. It shows us a top to bottom cross-section of the North Sea, clarifying the importance of the Dogger Bank, while also showing at a glance at which depths the different groups occur. 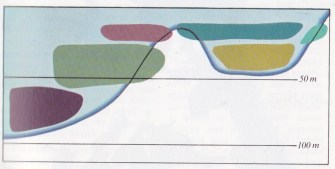 Although they are separated by the sand bank, the light red bivalves (in the northwest) and both the dark green and pistachio ones (in the southeast) share the same preference for near-surface dwelling – in shallows of up to 15 metres (50 feet). The same goes for the light green and mustard-coloured groups, both of which thrive at depths from about 20 to 50 metres (65 to 165 feet). The northernmost group (dark red) represents the deepest-living bivalves in the North Sea, at depths from 50 to 100 metres (165 to 330 feet).

Although both maps of course are simplified schematics of a situation that undoubtedly is more complex on the ground (so to speak), the combination of both provides us with an in-depth view of bivalve habitats that is rather ingenious – especially in combination with the colour-coded overview of the bivalve species in the North Sea. 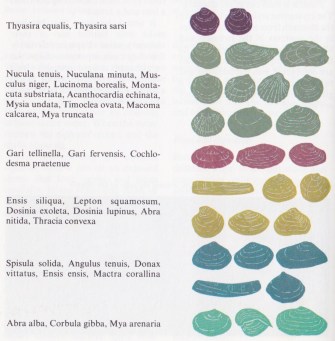 These illustrations taken from Seashells – Bivalves of the British and Northern European Seas, published by Penguin in 1980.

[1] In September 2013, the so-called ‘blobfish’, which lives at depths between 2,000 and 3,900 ft off the coast of New Zealand, was voted the world’s ugliest animal. To be fair, not all deep sea creatures are ugly. Some are also scary, others are merely bizarre. See here. ↩

[2] In December 2013, researchers from Marine Scotland discovered four new species in the deep waters around Rockall, the tip of an extinguished volcano peeking out above the waves some 300 miles west of Scotland’s Western Islands. ↩

[3] A class of molluscs whose bodies are enclosed by a two-part, hinged shell. Examples include cockles, mussels, oysters, clams and scallops. Mostly brainless filter feeders, bivalves exist in great variety, totalling over 9,000 species in more than 100 families. ↩

[4] The sand bank gave its name to the land bridge that connected Britain to the European mainland before the end of the last Ice Age. In the 1930s, unrealistic plans were proposed to resurrect this ‘Doggerland’. See #296. ↩

[5] The Dogger Bank is approximately 17,600 km2 (6,800 sq mi) in area. Connecticut is 14,357 km2 (5,543 sq mi).Through the centuries, the Dogger Bank has seen a few naval battles, the most bizarre being the 1904 Dogger Bank Incident, when Russian war ships fired upon British fishing vessels, mistaking them for Japanese torpedo boats. One British trawler was sunk and three fishermen killed. The Russians mistakenly also targeted seven of their own ships, killing one sailor and one chaplain. The incident nearly led to war between Russia and Britain. ↩

An unexpected finding shows us how little we know about the early human story in our region.
Up Next

It is known that diabetes brings with it a greatly elevated risk for a number of comorbidities. To this list, we now have to add elevated risk of cancer, as well.