A Map of the Smells of Newport, Rhode Island 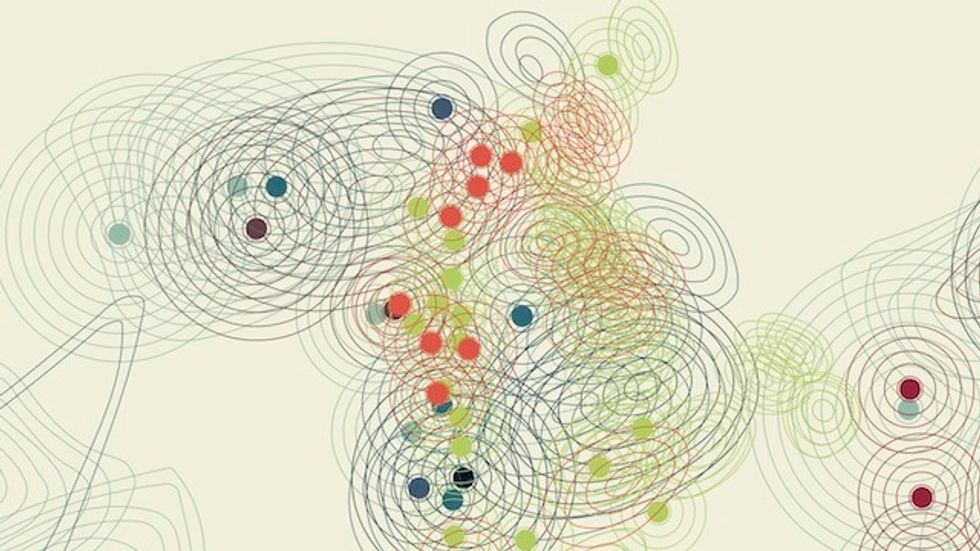 Cartography is a supremely visual discipline. The vast majority of maps are made by looking, and to be seen. Of course there are exceptions. Tactile maps, in the style of Braille lettering, have been around since at least the 1830s (see #574).

These maps raise an interesting point [1]: they are made for the blind and visually impaired, but not by them. Just because we're used to maps being entirely visual, doesn't mean their sensory input needs to correspond to their sensory output. As in the case of the Braille maps, where the input is still visual, but the output is tactile.

Just imagine the possibilities: multiply the two ends to the process with our five senses, that gives 25 potential permutations for sensory mapping. Some of them are actually quite common. Sound waves [2] are used to map the ocean floor: auditory input, visual output. Mountainous terrain is often best rendered in 3D, in tactile maps similar to the Braille ones mentioned above (except that the touchable topography on the map corresponds to the actual relief of the terrain).

But take away the visual element on both sides of the process, and the sensory pairings are harder to imagine. A map gathered by touch, but rendered in smell? Or a cityscape of sounds, translated to taste? That sounds (or feels, or looks) like a job for an accomplished synaesthete [3], not for the mere mono-aesthetes that the most of us are.

One step back from those far-flung fantasies are the smell maps produced by Kate McLean: olfactory [4] input, visual output. Her ongoing project Sensory Maps seeks to explore the links between smell, emotion and a sense of place. This map of summer smells in Newport, Rhode Island is a fantastic example. For, as she reminds us in the notes to this map, “memories triggered by smell are more emotional than those triggered by sounds, pictures or words”.

As the name implies, Newport is a seaside town. It is located some 60 miles south of Boston, on the southern tip of Aquidneck Island. Its history and character are intimately entwined with the surrounding Atlantic, lapping the city on three sides.

Newport was Rhode Island's most important colonial port city, a hub for whaling, piracy and the slave trade. Once a rival to New York, the city now numbers less than 30,000 permanent residents.

From the 18th century onwards, Newport reinvented itself as a holiday destination, earning nicknames such as America's Sailing Capital and Queen of the Summer Resorts. Many of those so-called Newport Mansions survive, some preserved as National Historical Landmarks.

Newport's appeal to New England's elite survived the Gilded Age, as evidenced by the fact that both presidents Eisenhower and Kennedy had their so-called Summer White Houses here [5].

Newport is also a major naval town, formerly home to part of the US Atlantic Fleet and still the site of several US Navy schools. Its social calendar boasts a Jazz Festival and Folk Festival [6], and many sporting events (notably in boating, golf and tennis).

Plenty to work with for Ms. McLean, who describes her charting of smell perceptions in the urban environment as 'sensory ethnography', and an 'alternative platform for meaningful communication'. In the case of Newport, is that just a fancy way of saying “smells like fish”? Let's have a sniff...

First of all, it must be said that for a map concentrating on the olfactory, this one is also very pleasing to the eye. Streets, shorelines and other elements of topography have been eradicated, giving centre stage to what seems a randomly distributed collection of beautifully coloured, radiant dots.

The number of isobars surrounding each point indicate the intensity of the smell. Perfect circularity means that the smell stays local, elongated isobars denote both direction and distance of scent drift.

The data for this smell map was collated from aroma perceptions by Newport residents and visitors, through smell walks and bike rides and online questionnaires, and by the artist herself. Respondents were asked to identify a smell and then rate their 'nosings', from 1 (very weak) over 2 (weak) and 3 (distinct) through 4 (strong) and 5 (very strong) to 6 (intolerable).

The map shows an arc of ocean smell, in some places intermingled with the aroma of beach roses, elsewhere mixing with freshly cut timber or bird's nests, encircling a centre enveloped in a multitude of tasty odours: beer bars, and that irresistible conglomerate of fudge, cookies and ice cream.

That central area is a riot of smells, competing with each other for nasal prominence. Move away from the centre a bit, and you're finding places where two or three aromas mix to produce combinations so uniquely blended that a Newport resident, or a nostalgic visitor, might smell it, and be transported back to its exact place of origin: that particular mix of suntan oil and beach roses; an unmistakable combination of bird's nests and freshly cut timber; or a just-right cocktail of lobster bait and juniper bushes...

More on Kate McLean's Sensory Maps (including the Newport, RI map) here on her website. This high-resolution map found here on this page on fastcoexist.com.

[2] Via sonar, short for sound navigation and ranging. ↩

[3] Synaesthesia, literally the 'union of senses', describes a condition whereby stimulation of one sense leads to perceptions in another sense. Synaesthetes will 'sense' certain colours or tastes when reading, hearing or thinking about specific numbers, letters or days of the week, for example. ↩

[4] TMy favourite sensory adjective! From olfactus, Latin for the sense of smell, deriving from oleo ('I smell'). The other sensory adjectives are: gustatory (taste), auditory (hearing), tactile (touch) and visual (seeing). ↩

[5] Eisenhower holidayed at a house at Fort Adams, originally built in 1873 for Civil War general Henry Jackson Hunt, because it was close to the Newport Country Club, where he like to play golf. JFK at Hammersmith Farm – Jackie Kennedy's childhood home. New England is the location of many Summer White Houses, notably those of FDR (Campobello Island), George Bush Sr (Kennebunkport), Bill Clinton and Barack Obama (both on Martha's Vineyard). ↩

[6] Bob Dylan went electric at the 1965 edition of the Newport Folk Festival, shocking many of his fans. ↩

[7] Why mentioned together? Do they smell the same, or always co-occur? ↩