This looks like a pretty standard map of a bit of Denmark. In fact, it is no such thing.

For there isn’t really a town called Köbstad in Denmark, nor is it close to a village called Kirkelandsby. And neither is Gaard a frequent rural toponym. Each indeed sounds convincingly enough like a proper Danish place-name. Instead, they denote generic toponymical categories. A købstad (1) is a market town, a kirkelandsby is a landsby (‘village’) endowed with a kirke (‘church’), and a gård (2) in Danish can mean either a farm or a yard. 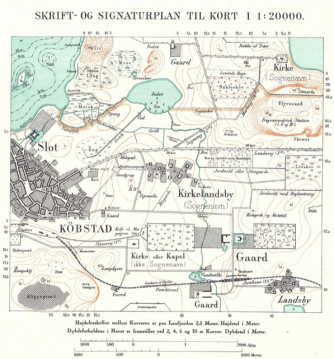 This is a map of anywhere, or of nowhere. It is a purely generic piece of cartography, its purpose purely intra-disciplinary: not to denote the outside world, but to teach people how to read a map (3).

But the map teaches us one extra, unintended lesson: What an abstract, idealised landscape looks like through Danish eyes. Incidentally, a  landsby – a small village without a church – is frequently called a ‘hamlet’ in English. Which of course has a Danish resonance all of its own (4).

So what does a generic Danish landscape look like? You’ll look in vain for a desert (ørken), a mountain range (bjergkæde)  or a coral reef (koralrev). What there is plenty of, is water, left, right and centre (an indsö, i.e. a lake, literally an ‘inner sea’). 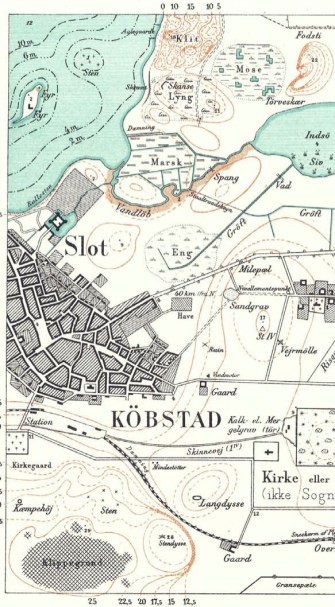 The left side of the map, in more detail.

On the little island in the western sea, there’s a fyr (lighthouse, a.k.a. fyrtårn), not far from shallows labelled sten (‘rocks’). The mainland beach south of the island is covered in shingle (rullesten), while two booms at the northern part of the beach cordon off an ålegårde (‘eel farm’).

Prominent features on the coast are a sizeable klit (‘dune’) 18 metres high, an extensive mose (‘bog’) just north of a tørveskær (literally ‘peat-cutting’, a.k.a. turbary), a big lyng (‘heather’) containing a skanse (‘redoubt’)  and a huge marsk (‘marsh’), delimited by a damning (‘dam’). The lake and sea are connected by a vandløb (‘stream’), which is bridged by a spang (‘log bridge’). The incidental kilde (‘source’)keeps the land moist, while the occasional grøft (‘ditch’) helps to keep the land drained. There are no headlands or peninsulas, no rocks or mountains; like the real Denmark, this fictional one is sandy, flat and watery.

Fictional Denmark may be relatively poor in topographical features, that doesn’t stop the fictional Danes from making the most out of it, who crisscross their imaginary homeland by fodsti (‘footpath’), sognevej (‘parish road’), markvej (‘country lane’), and landsvej (‘country road’) if they’re not taking the jernbane (railway, literally ‘iron road’ – compare French: chemin de fer).

The countryside is dotted with the occasional, isolated hus (‘house’), planted with nåleskov (‘coniferous forest’) and løvskov (‘deciduous forest’), levende hegn (‘hedgerows’), and a række af træer (‘row of trees’). No lush vegetation, no great plantations of cash crops: even in fictional Denmark, the weather is too inclement for extensive horticulture, the occasional jordvold med beplantning (‘planted embankment’) notwithstanding.

But there are other ways to scratch a living from the soil: via a sandgrav (‘sand pit’), a vejrmølle (‘windmill’, literally: ‘weather mill’) or by having your cows graze the eng (‘meadow’), rather than the flyvesand (‘quicksand’). The resources may be scarce, but there is little evidence of ruin and neglect, just a kirketomt (‘empty church’) here and there. Villages and cities are prosperous, no sign of defensive walls. The slot (‘castle’) seems a relic from more violent times, and now purely ornamental. 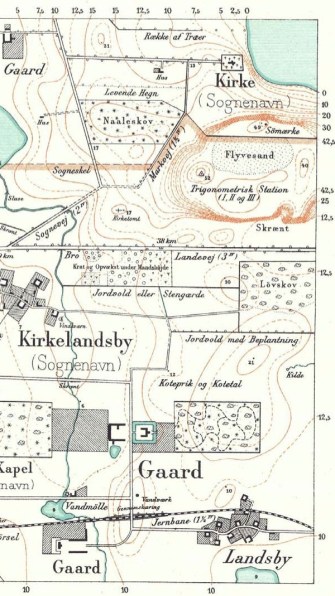 The right hand side.

How strange it must be to live in this purely instructive landscape. If this were a Google Map and we could zoom in to street view, we’d probably see a bank called Bank, in between a post office called Posthus and a clothes store called Tøjbutik (5).

What this world suffers from, is a shocking lack of specificity. And, simultaneously, of vagueness: there are no blurry lines, no grey zones, no works in progress in this neat bit of Danish abstractionism.

But maybe, just maybe, the generations of Danes who trained their map-reading skills on this fictional world, were inspired to dream up their own stories of the goings-on in the Købstad, and the strange miller who lived in the vejrmølle. Perhaps they saw themselves as characters on the map as well – operating the Trigonometrisk Station: what better way to be the demiurge of your own little world than to imagine yourself a land surveyor in a fictional landscape?

This map has been in my files for so long that I forget where it came from. Anybody who can provide a source is very welcome to do so.

(1) Literally ‘buying city’. Note that modern Danish has replaced the ö with ø.

(2) The Danish orthography on this map is antiquated. In 1948, the letter å replaced the double vowel aa, and the capitalisation of nouns (still current in German) was abolished. The switch hasn’t been entirely consistent: some place names are still spelled the old way, e.g. Aalborg instead of Ålborg. Similarly, the letter ö gave way to the ø, but most reluctantly so on maps. Only in 1957 were cartographic entities like Læsö and Helsingör re-spelled as Læsø and Helsingør.

(4) Although the etymologies are different. The name of the fictional Danish prince, and tragic protagonist of the eponymous Shakespeare play, derives from Amlaidhe, an Irish name for a hero in folk stories, meaning something like ‘furious, raging’. The churchless settlement gets its name from the Old French hamelet, a diminutive form of ham, which is cognate with Germanic words like Heim (German), heem (Dutch) and home (English).

(5) And maybe we’ll be just in time for the seasonal slutspurt (sales period).

The massive craft could carry 100 humans to Mars and revolutionize space exploration.
Up Next
Politics & Current Affairs

The Only Way to Make New Year’s Resolutions Stick

The vast majority of New Year’s resolutions, by some counts 88 percent, fail. Without a mechanism to encourage compliance, without some self-conniving, the natural tendency you have not to comply with your resolution (which is why you need to “resolve” to do it in the first place) will almost always win out.