Take a vast collection of 18th- and 19th-century ship’s logs (1), digitise their contents and geolocate each entry. Stick those millions of data points, on a blank map of the world, and this extraordinary image emerges.

Strictly speaking, this map does not show any land mass, yet we can clearly discern the contours of the continents – the cumulative effect of centuries of coast-hugging voyages, dutifully recorded in ship’s logs, generating enough data points to reveal the length and breadth of the land.

But some contours are notably absent: the Red Sea, the Persian Gulf, the eastern half of the Mediterranean, the Black Sea, the northern shores of Siberia, Canada and Australia. Too few ships (or at least too few ships with log books) plied those waters back then.

The most striking feature of the map, however, are the broad bands of traffic moving across the high seas. Their sheer volume reflects the economic importance of each transoceanic flow (2). At a single glance, we see how commerce binds the world together – and which parts of the world more closely than others.

The centre of gravity for global maritime commerce clearly is the east coast of North America (3). Three thick bundles of traffic, each composed of countless individual ocean crossings, converge on the continent’s eastern seaboard. The northernmost one traverses the North Atlantic to reach the busy ports of Britain. The southernmost one aims straight for Brazil’s eastern cape (4). The middle one, an apparently somewhat less focused bundle, is directed at northwest Africa before changing its mind halfway across the ocean, and bending south.

The latter two flows merge off the coast of Brazil, but that broad band separates again into three streams of traffic: one rounding Cape Horn on the southern tip of South America, the other two shooting past South Africa in the general direction of China. Maritime traffic across the Pacific is more spread out, but still some hubs are easily spotted: San Francisco and Hawaii, most notably. 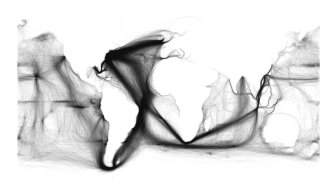 But there’s also something else going on in the Pacific. Something weird. Three sets of horizontal markings off South America’s equatorial bulge look a bit like the creases you get from folding a map too much. But that obviously isn’t how these latitudinal objects came to be. They must have been made by ships, going back and forth along an east-west axis. But why? There are no obvious destinations on either end of these mysterious lines.

Satyam, a reader from Buenos Aires, suggests a solution: “These are the doldrums, the point where the trade winds rarely blow. The sail ships of the age simply got stuck in that region until a random weather condition comes up and throws some gust of wind that can take the ship out of there”.

The word ‘doldrums’, of uncertain origin, arose in the 18th century, when sailing across equatorial regions became a regular occurrence. These days, the term is used mainly in its figurative sense, to express a state of apathy, boredom or malaise. But back when wind was the main source of naval propulsion, the doldrums were a very real trap for sailing ships, which could be stuck for weeks on end.

In The Rime of the Ancient Mariner, Samuel Taylor Coleridge describes the Pacific doldrums – i.e. the horizontal markings on this map – thus: “All in a hot and copper sky, / The bloody Sun, at noon, / Right up above the mast did stand, / No bigger than the Moon. / Day after day, day after day, / We stuck, no breath no motion, / As idle as a painted ship / Upon a painted ocean”.

Situated near the equator, in what is also called, less poetically, the Intertropical Convergence Zone (or ITCZ), the doldrums are an area of low pressure, and thus slight wind. The hot, equatorial air rises up into the atmosphere, from where it travels north or south, descending again at the so-called horse latitudes (5) (between 30 and 35 degrees north and south of the equator), and returning as the trade winds. The ITCZ is not only subject to long periods of calm, but also to violent thunderstorms and hurricanes.

But there is one additional horizontal line, much further to the south and thus not affected nor explained by the doldrums. This line is off the Chilean coast, around the Juan Fernández Islands (6). Satyam: “Though in those days determination of the longitude by using the chronometer was already well established, ships coming out of Cape Horn into the Pacific often got their equipment damaged and resorted to the old ways, sometimes bad weather remained with them preventing them to have a good observation.  Latitude was easy to fix in absolute terms, there was no need to keep Greenwich time over such a long distance.  Thus, ships went north until they reached the latitude of the Juan Fernandez and then tried to guess which way the islands might lay and if not found, go back and forth”.

Many thanks to Satyam for sending in this map, found here on Sapping Attention, a blog subtitled Digital Humanities: Using tools from the 1990s to answer questions from the 1960s about 19th century America.

(1) The US Maury collection, compiled by Matthew Maury from American log books dating from 1785 to 1860, and preserved as part of the International Comprehensive Ocean-Atmosphere Data Set (ICOADS).

(2) Although we must keep in mind that much of the traffic shown here consists of whaling voyages, where the sea itself is the destination.

(3) A result that is perhaps not surprising, and a little bit biased, since this map is compiled from American data.

(4) Cabo Branco (the White Cape), not far from João Pessoa, the state capital of Paraíba. The cape itself is not the easternmost point of the Americas, which is a few miles distant at Ponta do Seixas (Mushroom Tip).

(5) The name probably derives from the “flogging a dead horse” ritual, performed by seamen when crossing these latitudes. Sailors would parade an effigy of a horse around the ship’s deck and then chuck it overboard to mark the end of ‘dead horse time’, a period of about two months in which they worked off their debt to the ship’s paymaster, incurred because they had spent their advance pay on wine, women and song. Another explanation holds that ships stuck at this latitude suffered from such shortage of water that they had to throw their horses overboard. This version inspired Jim Morrison to write Horse Latitudes, a short spoken word piece on Strange Days, the second album by The Doors.

(6) A Chilean archipelago consisting of three main islands, most famous for being the place where the British sailor Alexander Selkirk was marooned. Selkirk’s real-life adventures were the model for world literature’s most famous shipwrecked sailor, Robinson Crusoe. In their honours, the islands formerly known as Más a Tierra and Más Afuera have been renamed Isla Robinson Crusoe and Isla Alejandro Selkirk.

On Earth, carbon can form millions of compounds, while silicon is largely stuck inside rocks. But elsewhere, silicon could form the basis of life.
Up Next

My Christmas gift to you is this version of the African-American spiritual “Go Tell on the Mountain,” sung by the Blind Boys of Alabama (with Stephen) on the Colbert Show. Attend […]