Archie Archambault, that’s who! The philosophy graduate turned printer struck upon the concept of circular maps after moving to Portland. In Oregon’s biggest city, he felt something that must have reminded him of grappling with Kant’s Critique of Pure Reason. He felt lost.

Not prepared to be stumped by Stumptown [1], he set about mapping the city himself. Which, in the Age of Google, might seem redundant. Except that Google Maps for all their ubiquity (in both coverage and accessibility) are not much help if you want to get to know a city. They’re like an eternal crib sheet: great at delivering specific info (how to get from A to B), terrible for getting a sense of the wider context.

As Mr. Archambault points out on his website, there’s scientific evidence [2] for the fact that GPS technology is making us less, rather than more spatially aware. When we rely, as is now so commonplace, on satellite-guided driving instructions tailored to our specific trip, we’re preventing our brain from doing what it should do naturally: making ‘mental maps’ of our surroundings. 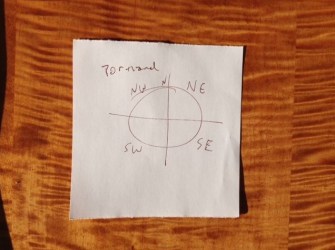 On these mental maps, we store the whereabouts of the roads and intersections, the landmarks and destinations that are relevant to us. How they are linked is not just a matter of objective proximity, but also of their subjective qualities: Do we find them easy to use (or reach)? What do they remind us of? How do we associate between them? Do we go there often? Mental mapping is very personal and mostly intuitive, and therefore – ironically – hard to replicate. Your average hand-drawn map is but a feint shadow of the mental map from whence it sprang.

Perhaps that intangible quality of mental mapping explains why we don’t notice that we do so much less of it these days. And yet this might be bad for our cognitive health, even for our mental health.

Mental mapping is brain gymnastics, just like doing that crossword or sudoku puzzle. Also, mental maps provide us with the opportunity to be flexible and the chance to improvise. Also good brain sport, but not something we keep up if we’re drip-fed driving instructions for a single route – a route that recalculates itself if we’re brave or stupid enough to take the wrong turn.

Studies show that people who follow directions fare significantly worse at recognising their surroundings than those who use a proper, paper map – even that they have less grey matter in the hippocampus [3], which is the area in the brain used to store spatial memories. Not to sound alarmist, but people with relatively small hippocampi are more likely to suffer from dementia, schizophrenia and other psychiatric disorders. Then again, by that same logic, London taxi drivers – clinically shown to have hippocampi hypertrophied with The Knowledge – should be among the sanest people on the planet.

For a while, Mr. Archambault cruised the city, obsessively reliant on Google Maps and the like, yet remained frustratingly stuck at the bottom end of the learning curve. Then he drew a big circle, overlaid it with crosshairs and took that gunsight for a rudimentary city map, divided into four quadrants. He would flesh it out via some first-person urban exploring. 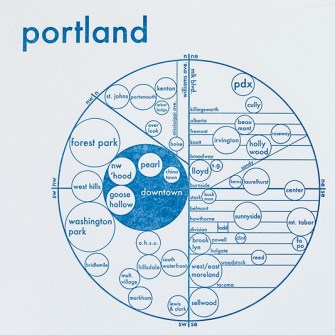 The main innovation of Mr. Archambault’s mapping technique is to reproduce that circle for the different neighbourhoods inside the main enclosure. It’s a departure from the generally more angular shapes that crowd most maps. And yet, the choice seemed obvious to Mr. Archambault: “The circle, our Universe’s softest shape, clearly conveys size and connections”.

Mr. Archambault’s aim is to map neighbourhoods, which can only be done by lots of legwork, and is in itself quite subjective: city neighbourhoods often have fuzzy borders, and can expand or contract, or even vanish, due to changes in its reputation, or its social and/or ethnic mix [4]. One of the best sources of information on the size, shape and name of neighbourhoods in any city are the local real estate agents – they’re responsible for much of the naming, shrinking and expanding of city neighbourhoods… 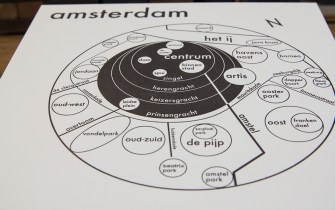 In 2011, Mr. Archambault started printing the Portland map on a 19th-century letterpress machine. Since then, he’s added circular depictions of half a dozen major cities in the US, one of Amsterdam and one of the solar system. Though O remains his favourite shape, Mr. Archambault is not a radical roundhead. No map of Washington DC can ignore its flawed-diamond shape. Nor does his. And Manhattan will always look like a sausage, or a cigar. Or, on Mr. Archambault’s map, like a very long oval.

With their remarkable layout, beautiful typography and handcrafted feel, Mr. Archambault’s maps could be mistaken for mere artwork. But he insists that they are tools first, to be used to grasp a city in the clearest, simplest way possible.

Image of the proto-map taken from this piece on Slate on Mr. Archambault’s maps. Other images taken from Archie’s Press.

[1] One of Portland’s many nicknames. Dating from the mid-19th century, when the city grew so quickly that large areas of forest were cleared before the tree stumps were removed. Early Portlanders jumped from stump to stump to avoid the mud on the unpaved ground. Other nicknames include Rose City, PDX (after the local airport code), P-Town and Bridgetown (the city is located at the confluence of two rivers, spanned by a total of 14 bridges). ↩

[2] Discussed in ‘Do our brains pay a price for GPS?’, by Leon Neyfakh in the Boston Globe. ↩

[3] Latin for seahorse, but also the name for a seahorse-shaped part of the brain. ↩

[4] For more on subjective neighbourhood mapping, see this fascinating attempt to pin down the London neighbourhood of Dalston, discussed in #551. In contrast to that experiment’s linearity, another, even more subjective dissection of London is more reminiscent of Mr. Archambault’s use of circles: #199. ↩

Perform at your mental peak.
Up Next
Words of Wisdom

“To be free is not merely to cast off one’s chains, but to live in a way that respects and enhances the freedom of others.” -Nelson Mandela